Richard Corliss at Cannes Film Festival on May 18, 1999
Eric Robert and Stephane Cardinale—Sygma/Corbis
By TIME Staff

Richard Corliss, a giant of American film criticism who died at 71 on Thursday, will be best remembered for the wisdom and affection with which he assessed the Hollywood landscape. But in the 35 years he spent at TIME, he was occasionally called upon to write a different kind of assessment. His byline appeared frequently on the magazine’s “Milestones” page, to which he contributed numerous obituaries of cultural figures who had recently died. In these pieces he wedded an encyclopedic knowledge of culture with a singular understanding of the relationship between artist and audience.

Here are excerpts from 10 of the most memorable obituaries written by Richard Corliss:

“Ten years ago, François Truffaut stood in the wings of Avery Fisher Hall at Manhattan’s Lincoln Center, chatting with an admirer while waiting to go onstage to speak at a tribute for Alfred Hitchcock. On cue the lights went down and scenes from Hitchcock films flared onscreen. Stopping himself in, midsentence, Truffaut exclaimed, ‘Oh! La projection!’ and turned, eyes bright, to a peephole that gave access to the magic images. The old lure was irresistible for this French movie master who was, first and forever, a child of the American cinema.”

Bette Davis: She Did It the Hard Way

“The frail wee bird tottered onto Manhattan’s Lincoln Center stage last April, surveyed the gilded hall in which she was being paid tribute, and bellowed her famous line from Beyond the Forest: ”What a dump!” Even in her decrepitude, sapped by a stroke and the rodentoid cancer inside her, Bette Davis knew how to fill a room with her majestic arrogance.”

“Most Dead fans have not turned themselves into career pilgrims. They go to Dead shows for good music and a great time. The older among them were kids of Garcia’s generation, and in the ’60s they enjoyed watching him living out their adolescent dream of cool: playing guitar, traveling the world, doing dope. Then, as these Boomers faced up to middle age—working hard and working out, with only the occasional nostalgic joint at a Dead show—they could also see Garcia mature and decay. They were Dorian Gray, and he was the picture. His belly ballooned; his skin was looser; his hair turned a ratty touch of gray. He looked as if he existed on peanut butter and peyote buttons.

If life is indeed a song, then Garcia and most of his older fans played it in different styles: studio version and free-form concert improv. Because the fans learned to play life straight, they will get by. Because he saw life as a long jam session leading to harmony or anarchy, he died—long after he might have, long before he should have. But as a force for good music and good vibes, Garcia can go to heaven and keep on truckin’. Like the song says, he will survive.”

“Death is not a happy ending in Hollywood movies. A beloved man is dead, and we mourn, for our loss at least as much as his. But this is a cause for celebration. Today a new generation, raised on facetiousness and arid sensation, has the thrilling duty to discover Stewart’s crucial contribution to the movies that made the movies great. The young may also take instruction from his exemplary life story. How simple it was—we would like to say how simply American. Jimmy Stewart lived for movies, fought for his country and died for love. Now isn’t that a wonderful life?”

“But who will play the Gregory Peck hero now that noble is for wimps and the best place to find integrity is in Webster’s? The masculine delicacy that Peck represented is gone from films; no star has filled his mold. Movie actors don’t have the voice or posture or temperament for it. Maybe America can’t believe in it.

To cherish Peck is to admit nostalgia for an era when popular and political culture could champion humanist ideals without smirking. If our time were not so facetious, so often corrupt, that time—and this man—would not seem so precious.

America, stand up. Gregory Peck has passed on.”

“Some people sing; Odetta testified. Martin Luther King Jr. called Odetta, who died Dec. 2 at 77 of heart disease, “the queen of American folk music.” In a career spanning nearly 60 years, she wrapped her booming, classically trained contralto around traditional hymns, work songs and pop tunes. A solid, inspiring figure at 1960s civil rights events, Odetta brought art-song precision to the gospel and blues repertoire. If a line could be drawn from Mahalia Jackson to Janis Joplin, it would have to go through her.”

“She was born Eartha Mae Keith, in the direst circumstances: in segregated South Carolina, to an Afro-Cherokee woman who’d been raped by a white plantation owner. From this rough rural seed grew one of the wittiest, most sophisticated entertainers of the midcentury and beyond.

Something in Eartha Mae saw the genius in changing Keith to Kitt—a surname of inspired felinity. It heralded the sex kitten who purred the lyrics to her lightly naughty hit singles of the ’50s, whose seductive presence in films and on Broadway barely concealed her claws and who would achieve camp renown as the prowling, growling Catwoman of the ’60s Batman TV series.”

“‘Men!’ The gorgeous teenager shrugs her shoulders and ponders the inanities of the lesser gender. “The minute we’re alone, he just wants to kiss me. And he says the silliest things. Well, nobody’s eyes are like wet violets, are they?” She should have known better: the man was just reporting what he saw. Even at 16, even in the creamy black and white of MGM’s Julia Misbehaves in 1948, Elizabeth Taylor had eyes the color of wet violets.

The rest of her was O.K. too. Indeed, from just about the moment MGM signed her in 1943 through her Cleopatra notoriety in the early ’60s and well beyond, Taylor was routinely called the world’s most beautiful woman. The label stuck to her like a price tag on the 33.19-carat Krupp diamond—one of the many famous gems that ornamented her already priceless image. It set a tab on her allure—and on the most public of Hollywood’s private lives—while obscuring her value as an actress and an enduring symbol of American moviemaking. Many talented tyros were bred in the studio hothouse. But in the ’40s none came to flower so luxuriantly, in the ’50s none found so bracing a challenge in Hollywood’s search for maturity, and when the system collapsed in the ’60s, none survived it so craftily as she.”

Robin Williams: The Heart of Comedy

“Just now we can cry for the man, for the torments he endured and the broken hearts of his family. But we would be wrong to remember him only as Robin Williams, Suicide. That would deny the best in ourselves–an inspired portion of which he planted there. On one episode of Mork & Mindy, Mork speaks with his (unseen) Orkan contact Orson about his sorrow over losing a friend. ‘You know,’ he says, crushed by bereavement, ‘when you create someone, you nurture them, they grow, and then there comes a time when they have to lead their own life.’ His voice breaks as he adds, ‘Or die their own death.’ Orson asks, ‘And now your friend is gone forever?’ ‘No, Sir,’ Mork whispers, pounding his heart. ‘I’ll always keep him right here.’”

Joan Rivers: As If She’d Let Us Forget Her

“‘Can we talk?’ Joan Rivers always asked audiences, and by this she meant, Can I talk about life’s biases and prejudices—mine? For more than half a century, first as a pioneering stand-up comedian, then as a defiant survivor, she spoke skewed truth to power and, in doing so, became her own potentate and garishly fossilized icon. She could have been a ranting bag lady, if the lady were as funny as she was rude and the bag was from Gucci.” 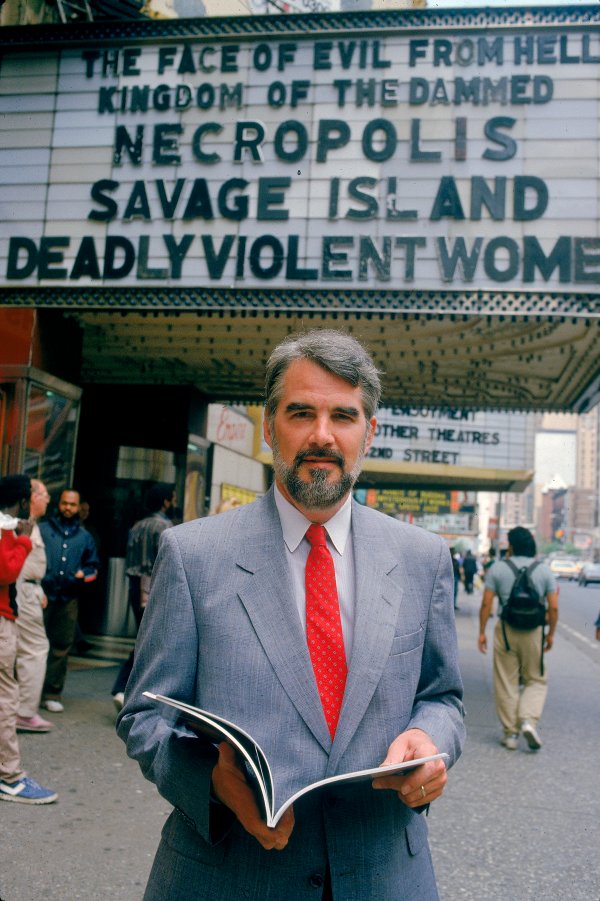 Remembering Richard Corliss: His Greatest Reviews
Next Up: Editor's Pick