How Human Activity Is Causing Earthquakes Across the United States

The Rock may be about to star in the earthquake disaster movie San Andreas, but it turns out California is no longer the leading state for quakes. Oklahoma had more than 500 earthquakes of magnitude 3.0 or greater in 2014. Quakes in the Sooner State are now hundreds of times more common than less than a decade ago.

And Oklahoma is not alone. Eight states in the South and Central U.S. are experiencing rapid earthquake growth as a result human activity, according to a new report from the United States Geological Survey (USGS).

“These earthquakes are occurring at a higher rate than ever before and pose a much greater risk to people living nearby,” said Mark Petersen, a USGS official.

The man-made Oklahoma earthquakes are a relatively new phenomenon, the consequence of oil and gas drillers who have taken advantage of the fracking revolution injecting billions of gallons of wastewater underground. The increase in earthquake activity began in 2009, but the Oklahoma state government only acknowledged the role of oil and gas activity for the first time this week.

Energy producers often need to dispose of polluted waste underground to prevent contamination of freshwater. Researchers have suggested that the disposal of drilling wastewater deep underground may increase the stress on fault lines as far as 6 miles away, and subsequently trigger earthquakes.

Thus far, most of the Oklahoma earthquakes have been relatively small. But recent research suggests that bigger quakes may be on the horizon as a result of the reactivation of a 300-million-year-old fault line in the middle of the country, according to a study published Thursday.

The damage caused by even a moderately-sized earthquake in Oklahoma would likely be greater than in a state like California–Oklahoma lacks the tougher building codes that are common in states accustomed to quakes. A 5.6 magnitude earthquake, considered moderate in most places that typically experience earthquakes, rocked the state in 2011. More than a dozen homes were destroyed, and two highways buckled.

The Oklahoma state government said this week that it will take action to prepare for more man-made earthquakes, and launched a website to explain the problem to residents.

Other states experiencing human-induced earthquakes include Alabama, Arkansas, Colorado, Kansas, New Mexico, Ohio, and Texas, according to the USGS.

Previous research has suggested that fracking, a controversial process of oil and gas extraction that involves opening up fractures in shale rock deep underground, may be in part directly responsible for some of these earthquakes, but the USGS says that the process is only “occasionally the direct cause of felt earthquakes.” Wastewater injection is a more common cause. 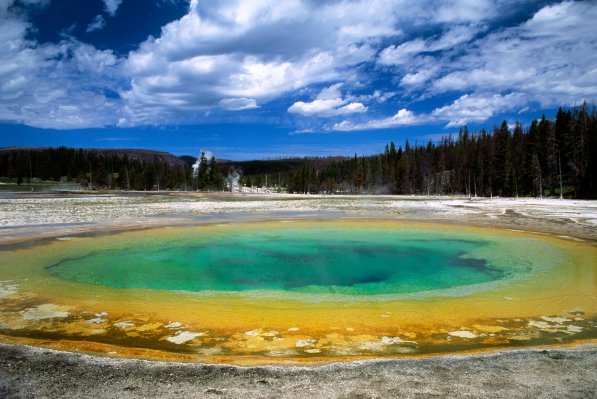 Massive Lava Chamber Discovered at Yellowstone
Next Up: Editor's Pick