On April 19, more than 600 refugees drowned in the Mediterranean when their boat capsized on its way from Africa to Italy. On April 12, about 400 people died in a separate shipwreck. So far in 2015, 1,600 migrants have lost their lives trying to cross the Mediterranean, and authorities fear that the number will surge as the weather warms. These five stats explain the rising tide of migration problems for Europe and for the desperate migrants of Africa and the Middle East.

EU member states received 216,300 applications for asylum last year. A large number of these asylum seekers are fleeing from Syria (civil war), Eritrea (dictatorship) and Mali (another civil war). Many of them are officially recognized as “refugees” by the United Nations High Commissioner for Refugees, a status that affords certain legal protections. But navigating the red tape takes time. Rather than waiting for a reluctant host country to take them in, many of these refugees entrust their fates to smugglers. As we’ve seen time and again, this can lead to tragic results.

2. Trouble on the Rise

75% of migrant deaths worldwide occur in the Mediterranean Sea. Europe has already seen a 43% increase in migrants through the first two months of 2015, and peak migration season (typically May through September) hasn’t yet begun. In 2014, the top countries of origin of people attempting to enter Europe by sea were Syria (67,000), Eritrea (34,000), Afghanistan (13,000) and Mali (10,000). Currently, an estimated 600,000 people are waiting in Libya to emigrate, according to Vox. These people represent three years worth of migration to Europe at the present rate.

Even for those migrants who safely reach European shores, their troubles are far from over. The EU requires that asylum petitions be processed by the country in which migrants first arrive. As a result, southern countries such as Malta, Italy and Greece have found themselves overwhelmed by the sheer numbers of incoming migrants, while richer northern countries receive relatively few. Until last year, Italy had a program in place to find and rescue migrant ships, potentially saving hundreds of thousands of lives. Italy had to spend $9.7 million a month to fund the program, and so turned to the rest of Europe for help. The United Kingdom and others made it clear that they would not offer support for rescue operations, for fear doing so would encourage more people to attempt to make the dangerous sea crossing. This past fall, the EU’s border patrol agency Frontex took over responsibility from Italian authorities—with a budget that is about a seventh of what Italy was spending on its own.

While Italy and the rest of the EU struggle, neighboring Turkey has been busy hosting 1.6 million displaced Syrians within its borders, or about half the people who have fled that country since the fighting began there nearly four years ago. Taking in refugees is not cheap; the total cost to Turkey is estimated to be $4.5 billion and rising. Turkey has introduced new regulations to give the Syrians a more robust legal status in the country, which includes access to basic services like health care and education. But Istanbul has stopped short of granting these migrants official refugee status, which would provide them with additional social services.

The cost of taking in migrants is not measured only in dollars or euros. As Europe’s economy has struggled to rebound, anti-immigrant attitudes have risen across the continent. In a Pew Research Center study conducted in 2014, a median of 55% of Europeans surveyed wanted to limit immigration. The percentages were much higher in struggling countries like Greece (86%) and Italy (80%). The rise in xenophobia has propelled new far-right parties to the political forefront, and older parties like Marine Le Pen’s National Front in France are looking to play a much larger role in their countries’ politics in years to come. As long as high-unemployment persists in the Euro region, rising xenophobia in EU countries will be an important driver in shaping EU migrant policy. 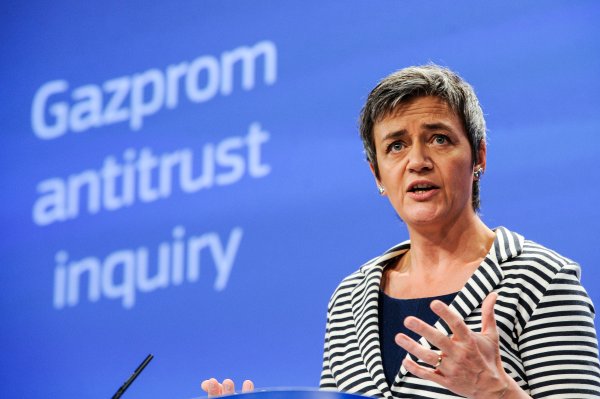 Here's Why Europe is Taking on Russia's Gazprom
Next Up: Editor's Pick