Lesley McSpadden, mother of Michael Brown, wipes her eye as she is flanked by her attorneys Anthony D. Gray, left, and Benjamin L. Crump, right, during a news conference April 23, 2015, in Clayton, Mo.
Jeff Roberson—AP
By Josh Sanburn

A wrongful death lawsuit filed by the parents of Michael Brown against the City of Ferguson, Mo. claims the black teenager had his hands up and told Officer Darren Wilson “don’t shoot” — in contrast to the findings of a U.S. Department of Justice investigation into the incident.

The lawsuit was filed Thursday by Michael Brown Sr., and Lesley McSpadden against the city, Officer Darren Wilson and former Police Chief Thomas Jackson. The family claims that the city engaged in a pattern of unconstitutional behavior involving stops, detentions and arrests, excessive force and a practice of racial bias against the city’s black residents.

There is, however, one key difference between the facts laid out in the family’s civil lawsuit and the DOJ’s findings: the family claims that Brown was holding his hands up at the time of the shooting and told Officer Wilson not to shoot because he was unarmed.

“In a final attempt to protect himself, and prevent additional bodily harm and/or imminent death, MBJ turned around and raised his hands in a non-threatening manner,” the lawsuit says, referring to Brown. “Upon information and belief, MBJ conveyed the following statement to Defendant Wilson: ‘Don’t shoot. I don’t have a gun. I’m unarmed.’”

Although the DOJ report did find a history of explicit racial bias among Ferguson police officers, it concluded that the claim that Brown had his hands up at the time Wilson shot him could not be substantiated by the physical evidence of the crime scene and accounts by credible eyewitnesses. Instead, the federal government found that Brown was running toward Wilson, which contributed to the decision by the justice department not to pursue federal charges against the officer. A grand jury also elected not to charge Wilson, who is white.

After some eyewitnesses claimed Brown had been holding his hands up at the time of his death, the phrase “Hands up, don’t shoot” became a rallying cry of demonstrators in Ferguson and around the country.

The lawsuit asks for punitive and compensatory damages from the city of Ferguson on seven counts of what are described as unconstitutional practices but doesn’t specify a dollar amount. The suit also seeks changes to the police department’s patrol techniques and asks for a compliance monitor to oversee the city’s use of force practices for the next five years or until a court has determined that reforms have taken place. 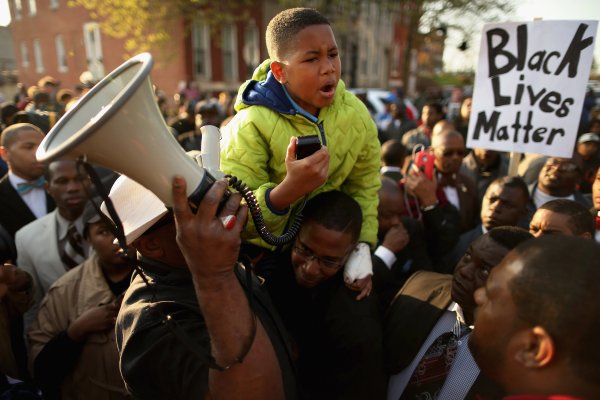 Witness Protests in Baltimore Over the Death of Freddie Gray
Next Up: Editor's Pick