Hormone Treatments Raise Cancer Risk Even After They're Stopped

Researchers admit that when it comes to hormone therapy — estrogen and progestin — to treat the symptoms of menopause for women, they don’t have a lot of consistent or convincing answers. They thought the medications could not only help menopause symptoms but also protect against heart disease, although some studies showed the added hormones could also raise risk of breast cancer. The resulting advice to women seeking answers about whether hormone therapy is for them has been anything but satisfying.

Now the scientists involved in the first large trial of hormone therapy, the Women’s Health Initiative (WHI), have continued to study those women who participated in the 1990s and found some surprising results. Reporting in the journal JAMA Oncology, they say that the risk of breast cancer for women taking the combination of estrogen and progestin remains the same seven to eight years after they stop the drugs than while they were taking them.

The estrogen helps to maintain levels of that hormone as natural amounts start to drop during menopause, and the progestin protects the uterus from potential tumors arising from excess amounts of estrogen. They also found that for the quarter or so post-menopausal women who have had a hysterectomy, and can take estrogen alone, the hormone can lower their risk of breast cancer.

The WHI was created to study the health effects of hormone therapy on the millions of women taking them. Some small studies had suggested that the hormones could protect women from heart disease; women tend to have heart attacks about a decade or so later than men on average, and researchers believed some of that protection came from estrogen. But doctors were concerned about the known connection between estrogen and breast cancer, since during puberty estrogen contributes to breast tissue growth, and wanted to understand how the benefits for the heart matched up against the risks to the breast, so they enrolled more than 26,600 women aged 50 to 79 years in the WHI.

They intended to study them until 2005, but in 2002, they stopped the trial when it became clear that there was a group of women experiencing higher heart disease rates. It turned out that these were the women taking hormones, either the combination or estrogen alone.

MORE: The Truth About Hormones

The results completely changed menopause treatment, and led to a precipitous drop in the use of the medications; in the U.S., where about 40% of women turned to the hormones, only 15% did after most experts agreed that they should only be used in the short term, for about a year or so during and just after menopause. The assumption was that the benefits in lowering breast cancer risk would be similar — if women stopped taking the hormones, then their risk would decline.

That seemed to be true, at least for the first year or so after discontinuing the therapy. But in 2013, Dr. Rowan Chlebowski, an oncologist at Los Angeles Biomedical Research Institute at Harbor-UCLA Medical Center, and one of the initial investigators on WHI, reported that the benefit didn’t hold for long. He found that if women who had previously been on estrogen and progestin therapy were studied for more than eight years, their risk of breast cancer started climbing back up, to levels that were on par with when they were taking the medications.

That finding, however, contradicted other results from studies. And to make matters more confusing, the women who had had a hysterectomy, and no longer had a uterus so could take estrogen alone, did not seem to experience the same increased risk of breast cancer. All of this data prompted Chlebowski to do a more detailed analysis of the WHI data on women who agreed to continue to participate years after they stopped taking the hormone therapy.

In the current study, it’s clear that the combination of estrogen and progestin increases breast cancer risk, he says. The drop in risk that occurs immediately after the therapy is stopped is likely due to the changing hormone environment. Any small or emerging tumors that were already present before hormone treatment started may eventually start growing again years later.

For women who have had a hysterectomy, taking estrogen alone does not increase breast cancer risk and may, according to the latest results, even provide some protection against the disease.

“It looks like hormones have longer term lingering effects,” says Chlebowski. “For estrogen and progestin together, we see an increase in risk even years after you stop. But for estrogen alone, it looks like the hormone may be more favorable in reducing breast cancer risk than we thought before. The estrogen alone findings are now quite compelling that we may had to call lit risk reduction.”

The results should stress the importance of defining what menopausal symptoms are, and how much they interfere with women’s daily lives. Most health groups now recommend short term hormone therapy, but it’s clear that the risks of breast cancer remain even after exposure. So doctors and patients need to weigh the relief of symptoms against the unhealthy legacy of taking these medications. “There is a little more risk than we thought with estrogen and progestin,” says Chlebowski. “But it’s always difficult to figure out how to categorize that risk. It’s different for each woman.” 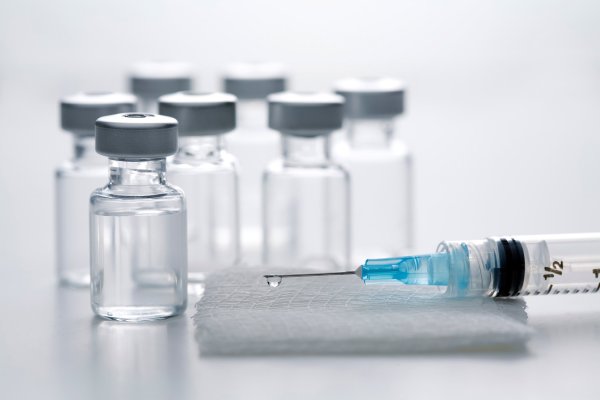 Vaccines Don’t Cause Autism, Even in Kids at Higher Risk
Next Up: Editor's Pick