This Beautiful Photo Shows Why the Hubble Telescope Matters

This Hubble Space Telescope image of the cluster Westerlund 2 and its surroundings has been released to celebrate Hubble's 25th year in orbit.
NASA/ESA/Hubble/AFP/Getty Images
By Sam Frizell

The Hubble Space Telescope turns 25 on Friday, and in honor of its quarter-century anniversary, NASA unveiled a celebratory photo.

The Hubble photo captures the full spectrum of light emitted by new stars, showcasing more colors than the human eye can see on its own. The telescope reveals in magnificent detail the spawning of newborn stars and the gas and dust around them.

This particular image is of Gum 29, according to NASA, a region of the universe where many new stars are born 20,000 light years away from Earth. The intensely lit cluster is Westerlund 2, between 6 and 13 light years across and made up of 3,000 stars. 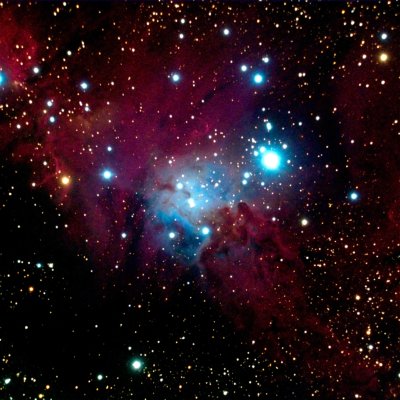 Here's the Universe's Biggest Structure
Next Up: Editor's Pick