Carl Sagan had it easy. The famed astronomer, author and TV host, who died in 1996, may have mastered one of the most head-crackingly complex disciplines in all of the sciences, but when it came to explaining its mysteries to everyone else, he didn’t have to look hard for an audience. Space is intoxicating, Sagan was engaging and there just weren’t that many distractions that would keep people from tuning into his Cosmos series or reading his books.

Not so today. With 500 cable channels and an infinity of Internet options all vying for attention, customers are harder to come by. And too many of the ones who are left are being picked off by the forces of informational darkness—the anti-vaxxers and climate change deniers and moon-landing hoaxsters all peddling their chosen rubbish.

It’s those challenges that astronomer Neil deGrasse Tyson, director of the American Museum of Natural History’s Hayden Planetarium and host of the 21st-century reboot of Sagan’s Cosmos, must face every day. He’s done an impressive job so far, wooing science lovers with his books and TV appearances and Star Talk radio show. Now he’s stepping up his game, bringing Star Talk to TV in a frank bid for the minds and eyeballs of science’s non-lovers, non-believers and can’t-be-bothereds too.

Everything about the new Star Talk—which premiered on April 20 on the National Geographic Channel with a first-season, 10-episode run already in the can—breaks the science show rules. It ditches the familiar format of smart guy prowling a set with zillions of special effects to make the technical stuff go down easy in favor of a talk show recorded before a live audience in New York City’s Rose Center for Earth and Space, home to the Hayden. His co-host is a rotating cast of comedians, and his guest is typically a non scientist—Star Trek‘s George Takei, sex columnist Dan Savage, Interstellar director Christopher Nolan, President Jimmy Carter.

Much more daring—or much more reckless, depending on how you look at these things—is the show’s time slot: Monday nights at 11 p.m. EDT, when both basic cable and the broadcast networks bring their comedic sluggers to the plate. But the audience for the likes of Jon Stewart and Jimmy Fallon is exactly the demo Tyson is after, even if he’ll have to work hard to win them.

“We recognize candidly that a scientist alone would not have served as a draw for the audience to come to the show,” he says. “The icon or the celebrity is the excuse to talk about the science and we try to blend that with the pop culture and the comedy.”

It’s a mix that can work in both predictable and unpredictable ways. No surprise if you find Nolan talking wormholes and time dilation and the other cosmological puzzlers that made Interstellar go. No surprise either if Takei talks about the science of Star Trek and how much of it can—or already has—come true. But it’s refreshing if Carter does not have to talk about the Middle East peace process and instead can be allowed to show off the nuclear engineering cred he earned in the Navy. Something similar is true of Savage talking sex while constrained by the guardrails of an academic anthropologist who specializes in the neuroanatomy of love appearing with him.

The premiere episode, with Takei, also featured a scientist, astrophysicist Charles Liu of the State University of New York College of Staten Island. Judging by that first installment, the show could use a little tweaking—or perhaps relaxing—with everyone on the panel working a little less hard to fill their assigned roles and instead just allowing the conversation to go wherever it wants to go.

Future episodes could push the envelope of the new format further—perhaps even until it rips. Tyson speaks openly about the possibility of having both Charlie Sheen and, discomfitingly, Jenny McCarthy on the show. “Sheen was in the museum and asked some very deep philosophical questions about the universe,” he says. “Jenny McCarthy had me on her show and has a very curious mind about the universe. If she brings up vaccines I’d be all over her, but only if it goes there.”

Guests like that may just be a ratings play. Nothing could make Sheen’s gyros go haywire like talking cosmology—and you wouldn’t want to miss that. But there may be tactical genius behind bringing on someone like McCarthy. Scientific know-nothingism is a modern scourge, and an inquisitive but academically rigorous interlocutor like Tyson might be the kind of person who can school McCarthy in the difference between finding things out and making things up.

“Is science a satchel of facts that is poured into your head or is it an understanding of emergent truths?” he asks—clearly knowing his answer. “Science literacy is not just what you know but how your brain is wired for thought. If you can achieve that, you never have to ask if the moon landings are real again.”

Tyson is willing to take a flier on the possibility that viewers in the playtime slot of late-night TV might be willing to invest an hour in getting smarter. If he doesn’t succeed, it may say more about us than him. 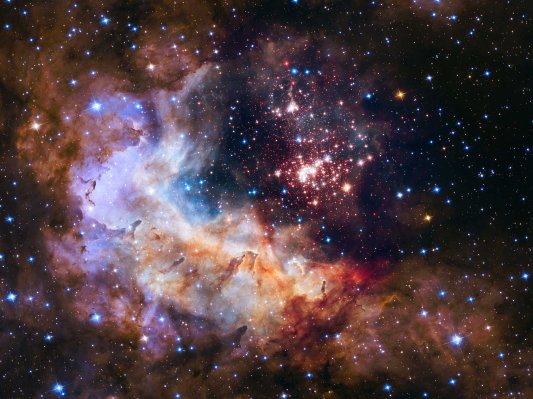 This Beautiful Photo Shows Why the Hubble Telescope Matters
Next Up: Editor's Pick