Hillary Clinton’s allies are pushing back against the suggestion in a new book that donations to the Clinton Foundation influenced the handling of the sale of U.S. uranium mines to a Russian-backed company.

The new book, Clinton Cash: the Untold Story of How and Why Foreign Governments and Businesses Helped Make Bill and Hillary Rich, says that Hillary Clinton failed in 2010 to block the purchase of American uranium mines by a Russian-backed company while people with financial and strategic interests in the sale were making millions of dollars of donations to the Clinton Foundation, a philanthropy run by her husband, former President Bill Clinton.

The suggestion of outside influence over U.S. decisionmaking is based on little evidence — the allegations are presented as questions rather than proof. The deal’s approval was the result of an extensive interagency process that required the assent of at least nine different officials and agencies. A former State Department official who participated in the deal’s approval told TIME that Clinton did not weigh in on the uranium sale one way or the other, and her campaign calls the allegations in the book “absurd conspiracy theories.”

But the book’s dark suggestions reflect the growing problem Clinton faces in her run for the White House in 2016 as more and more details of the foundation’s fundraising activities present the appearance of impropriety and lack of transparency during her time as Secretary of State.

One chapter of the book, written by conservative author Peter Schweizer and obtained by TIME, focuses on an obscure deal that had been years in the making. Schweizer says Secretary Clinton failed to block the Russian State Atomic Nuclear Agency (Rosatom), a Kremlin-controlled nuclear agency, from purchasing a controlling stake in an American Uranium mining concern, Uranium One. The company’s chairman, Ian Telfer, was a major donor to the Clinton Foundation. Several other Clinton Foundation donors stood to gain from the agreement as well.

Because the proposed sale involved the transfer of potentially strategic U.S. assets, the Uranium One transaction was subject to approval by the Committee on Foreign Investment in the United States (CFIUS), an interagency panel that comprises powerful federal agencies. In prior years, Clinton had urged the committee to take a hawkish view of deals involving U.S. strategic assets, and Schweizer says that should have inclined her against the Rosatom purchase. “Despite a long record of publicly opposing such deals Hillary didn’t object,” Schweizer writes in the version of the chapter obtained by TIME. “Why the apparent reversal? Could it be because shareholders involved in the transaction had transferred approximately $145 million to the Clinton Foundation or its initiatives? Or because her husband had profited from lucrative speaking deals arranged by companies associated with those who stood to profit from the deal?”

The State Department’s role in approving the deal was part of an extensive bureaucratic process, and the chapter offers no indication of Hillary Clinton’s personal involvement in, or even knowledge of, the deliberations. State has just one vote on the nine-member committee, which also includes the departments of Defense, Treasury and Energy. Disagreements are traditionally handled at the staff level, and if they are not resolved, they are escalated to deputies at the relevant agencies. If the deputies can’t resolve the dispute, the issues can be elevated to the Cabinet Secretary level and, if needed, to the President for a decision. The official chairman of CFIUS is the Treasury Secretary, not the Secretary of State.

Before purchasing a controlling stake in Uranium One, the Russian conglomerate also had to get approval from the Nuclear Regulatory Commission, an independent agency outside of the State Department’s purview, as well as Utah’s nuclear regulator. It also received the sign-off of Canada’s foreign investment review agency. The deal itself was the outgrowth of a diplomatic initiative launched by the Administration of George W. Bush to expand trade opportunities between Russia and the U.S., including in the area of nuclear power.

One official involved in the process said Clinton had nothing to do with the decision in the Uranium One case. Jose Hernandez, who as former Assistant Secretary of State for Economic, Energy and Business Affairs was the State Department’s principal representative on the committee, rejected the notion that Clinton’s foundation ties had any bearing on the deal. “Secretary Clinton never intervened with me on any CFIUS matter,” he told TIME. A spokesperson for Hillary for America, Josh Schwerin, also attacked the suggestions made in the book. The transaction “went through the usual process and the official responsible for managing CFIUS reviews has stated that the Secretary did not intervene with him,” Schwerin says, “This book is twisting previously known facts into absurd conspiracy theories.”

Throughout the new book, Schweizer suggests that Clinton used her authority as Secretary of State to intervene on behalf of companies that donated to her family’s foundation. Clinton has sought to distance herself from the charges on the campaign trail, calling the GOP claims “distractions.”

Even if Clinton was not involved in approving the deal with the Russian company, the book does raise more questions about the Clinton Foundation’s transparency regarding its donors and shows that the issue will continue to dog her candidacy. The book reports that Telfer, the Uranium One chairman, donated $2.1 million to a Clinton Foundation subsidiary through a charity he controls around the time the purchase was being finalized, an assertion TIME has verified through a review of public records. Those donations do not appear on the foundation’s disclosure of donors. Telfer is listed for smaller donations he made directly to the parent foundation.

Exempt from that relationship were an array of Clinton Foundation subsidiaries, including the Clinton Giustra Enterprise Partnership, a Canadian-based charity that works to establish “social enterprises” in the developing world. Telfer is one of three directors of a charity called the Fernwood Foundation, according to Canadian tax records dug up by Schweizer and verified by TIME. Fernwood has donated $2.1 million to the Clinton Giustra Enterprise Partnership, which at one point passed through as much as 88% of its donations to the main Clinton Foundation, Schweizer writes. Schweizer alleges that Telfer had 1.6 million shares in Uranium One and profited hugely off the deal, a claim that couldn’t be independently verified.

Without a full account of donors to the foundations, allegations like the one in Schweizer’s book will follow Clinton’s candidacy even as she seeks to remain above the fray. The campaign, for its part, will continue to do its best to discredit Schweizer’s book and distance itself from Republican attacks.

“While Republicans focus their efforts on attacks, Hillary Clinton is going to continue to focus on how to help everyday Americans get ahead and stay ahead,” the Clinton campaign said in a memo circulated Tuesday night. “That’s what her campaign is about, and no book — especially one as discredited as this one — is going to change that.”

Read next: How New Hampshire’s Women Paved the Way for Hillary Clinton 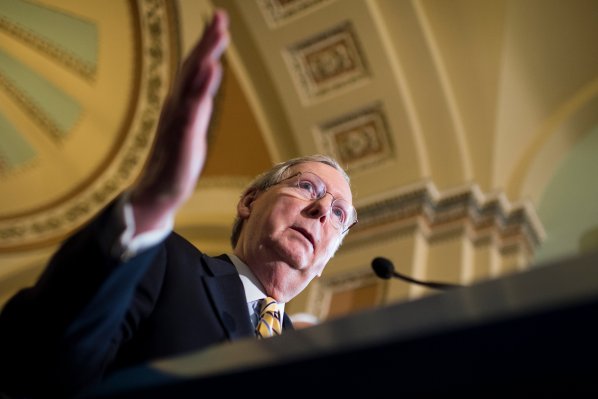 McConnell Introduces Bill to Extend Surveillance Under Patriot Act
Next Up: Editor's Pick