Twitter’s abuse problems seem to be a daily source of news in the tech world. The company is in the midst of a recently invigorated process of considering, applying, and enforcing rules that take harassment seriously. However, in the span of one week, Twitter managed to show both a commitment to addressing the problem and what many users feel is a persistent tone-deafness to the needs of people most likely to be harassed.

Last week, in a Washington Post op-ed, Twitter General Counsel Vijaya Gadde directly addressed the company’s past inadequacies and promised change. “Our policies and product have not appropriately recognized the scope and extent of harm inflicted by abusive behavior,” she said. “Freedom of expression means little as our underlying philosophy if we continue to allow voices to be silenced because they are afraid to speak up.”

On Monday, however, Twitter introduced a new change that elicited widespread frustration. Among other changes, the company altered its messaging feature to allow its 288 million users to send anyone who opts in a direct message. While Twitter saw it as a change that makes it “easier than ever to have private conversations,” many people understood it as one more feature that enables harassers and prioritizes profit, something that is sometimes hard to remember is the point on a platform that functions, for many, like a public utility. The backlash to this change is similar to the one last year after the company changed (and then restored) its blocking feature.

When users push back against changes, or demand them, it often demonstrates the ways in which structure and profitability are at odds with community needs. Twitter’s fundamental structure, enabling as close to unfettered communication as possible, is simultaneously the source of its profit and its abuse potential. It’s safe to say that, despite the best intentions of individual actors, gender-specific safety and free speech have not historically been prioritized in Silicon Valley.

For many women online, so much of what is considered “respect for the basic principles of free expression” actually undermines those very principles, and limits their overall freedom of expression. This is hardly a new problem. Regardless of the platform or place, on or offline, the threat of violence disproportionately silences women every day. The Internet has made it harder for the world to doubt women when they talk about it, to minimize the effects, or to look away.

The abuse that women encounter online, more likely to be gender-based, sustained, sexually harassing and tied to intimate partner violence, has specific, discriminatory harms. Social media companies, growing quickly in a fast-changing, unprecedented space, have been slow to appreciate how their products exacerbate these harms, despite the fact that, time and time again, it’s obvious that platforms that ignore these differences quickly become hostile spaces for women.

While Twitter is vulnerable to abuse in ways that other platforms may not be, it’s hardly unique. Every company that counts on customer interaction faces similar issues, and each one is adapting as they grow. Their responses often depend on user activism. For example, in 2013, Jaclyn Friedman of Women, Action and The Media, Laura Bates of Everyday Sexism, and I ran a successful public campaign demanding that Facebook recognize instances of gender-based hate and harassment on its platform. In a matter of days, after more than 60,000 consumer tweets and 5,000 emails, more than two dozen advertisers announced they would be leaving the platform. Facebook responded to our requested changes, and the long-term result has been a productive dialog among the company, civil society and women’s rights advocates. Engagements such as these can help build more genuinely neutral and liberating spaces.

For years, the most commonly heard Silicon Valley response to abuse-related concerns has almost always been some variation of “We have to balance safety with freedom of speech.” For users more physically at risk and epistemically disadvantaged, the equation isn’t safety OR free speech, it’s safety AND free speech. Acknowledging the fallacy of the idea that platforms are “neutral” and level playing fields isn’t just a matter of individual ease-of-use or comfort; it has critical social, economic and political implications.

There are 200 million more men online than women today. Creating vibrant, dynamic, gender-neutral spaces is essential to stemming the growth of that gap. According to the United Nation’s working group responsible for understanding and developing policies to address the gender digital divide, without a visible, public and genuine commitment by social media companies to create more egalitarian norms on their platforms, that number will increase exponentially. No one claiming to support freedom of speech and expression can be taken seriously without a concurrent, genuine, and prioritized commitment to understanding this problem.

When institutions tolerate sustained online bullying, abuse, and harassment, they become complicit in it. In the end, it’s social media executives, advertisers, and investors who need to make it publicly clear that addressing abuse is a priority that they will invest in and structurally adapt to. Twitter is now constantly updating its policies and rules to create a more level playing field. Each change is, in effect, an unprecedented experiment. 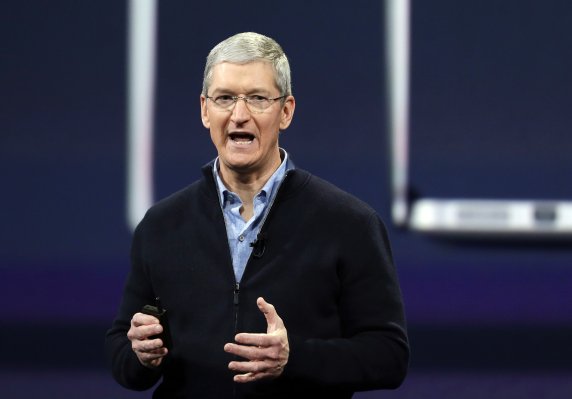 Watch Tim Cook Bust Out Some Adorable Dad Dancing
Next Up: Editor's Pick