Michelle Byrom, in a photo released in 2010.
Mississippi Dept. of Corrections/AP
By Nate Rawlings

Mississippi will execute its first female death row inmate in seven decades this week, if the state Supreme Court approves the Thursday date requested by the attorney general.

Attorney General Jim Hood requested Tuesday that Michelle Byrom be executed by lethal injection for the 1999 murder of her husband, Edward Byrom Sr. If the state Supreme Court, which has the final say on executions, confirms the date, Byrom will be the first woman put to death in the state since 1944.

Byrom, who is one of two women on death row in Mississippi, was convicted of killing her husband, who was, according to many accounts, abusive to her and her family. But according to the Jackson, Miss. Clarion-Ledger, Byrom only admitted guilt when the sheriff asked if she was going to allow her son to take the rap for the murder. “No, he’s not going to. I wouldn’t let him. … I will take all the responsibility,” she said, according to the paper.

Byrom’s son, Edward Byrom Jr., confessed to killing his abusive father four times – in three letters smuggled to his mother in jail, and once to a court-appointed psychologist – CNN reports. Byrom’s attorneys, who were trying their first capital murder case, never had the confessions entered into evidence, and Byrom Jr. took a plea deal for a reduced sentence.

The son’s reported confessions are among the chief reasons Byrom’s advocates believe she deserves a stay of execution. The fact that a jury never heard any of Byrom Jr.’s confessions is a “perversion of American jurisprudence,” according to Warren Yoder, executive director of the Public Policy Center of Mississippi.

According to the Clarion-Ledger, only 53 women have been executed in the United States since 1900, and if Byrom is put to death, she would be only the fifth woman executed in the past ten years. But former state Supreme Court Justice Oliver Diaz Jr. believes Byrom should get a new trial. “The majority of Mississippians support the death penalty because they think that people get fair trials and they think that they have competent attorneys representing them,” Diaz told CNN. “In this case, she didn’t have either one.” 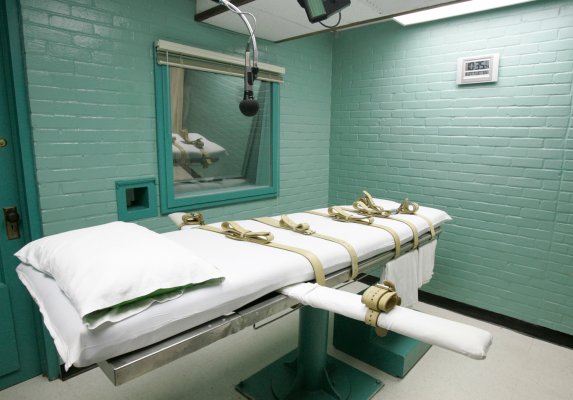 Texas Officials Get More Execution Drugs, But Won't Say How
Next Up: Editor's Pick