South Africa Deploys Its Army to Halt the Killings of Foreigners

South African troops were deployed to areas of Johannesburg on Tuesday night to help quell ongoing bouts of anti-immigrant violence after a rash of xenophobic attacks spread across the nation in recent weeks.

“We come in as the last resort,” Nosiviwe Mapisa-Nqakula, the Defense Minister, told reporters at a news conference in Alexandra township, according to the New York Times. “The army will serve as a deterrent.”

Police units backed by military commandos arrested 11 people after raiding a hostel in the suburb of Jeppestown in eastern Johannesburg, where they confiscated a smattering of weapons, including a small ax and several knives.

“We will continue this operation after identifying more hot spots across the province. The army was there as backup during the raid,” said Lieutenant Kay Makhubela, a police spokesman, according to the local news outlet Independent Online.

Bouts of xenophobic violence have rattled South Africa for two weeks, after attacks on foreigners were reported in the coastal city of Durban and later spread to areas in Johannesburg where poor migrants, largely from Malawi, Mozambique and Zimbabwe, and local communities mix.

The bloodshed made headlines across the globe over the weekend after photographer James Oatway captured chilling images of a Mozambican street hawker being stabbed to death by a group of South African men. The four suspects tied to the gruesome killing appeared in court on Tuesday, where they were charged with murder and robbery, reports the Mail & Guardian.

At least seven foreigners have been killed and hundreds have fled the country in recent weeks. Doctors Without Borders estimates that more than 5,000 people fleeing the violence are currently taking shelter in camps near Durban. 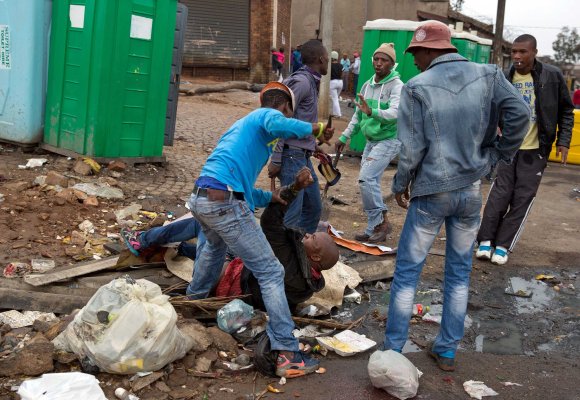 Brutal Murder Is Sparked by Anti-Immigrant Rage in South Africa
Next Up: Editor's Pick