Here's What You'd Find if Julianna Margulies' Email Got Hacked

This season of the CBS drama The Good Wife featured an email-hacking storyline ripped from the news, but the show’s star and TIME 100 honoree Julianna Margulies said she didn’t feel right following the Sony hack scandal.

“I chose not to read any of those emails,” Margulies said at this year’s TIME 100 Gala. “It was such an invasion of privacy and was very disturbing.”

The award-winning actress thanked her husband Keith Lieberthal, whom she called a “recovering attorney,” for encouraging her to treat her email with extreme caution. “Anything important, I call,” she said.

So what would fans find in Margulies’ email were she hacked? “Nothing! Maybe romantic emails,” she said. “People wouldn’t believe it.” Added her husband, “They might blush.”

Margulies named Supreme Court Justice Ruth Bader Ginsburg as her favorite person on this year’s TIME 100 and was disappointed when she heard she couldn’t attend the gala. “I get it,” she said. “Court’s in session.” Though Ginsburg is an inspiration for Margulies personally, she said she doesn’t think Alicia, her character on the CBS show, is anything like RBG. “I don’t think Ruth would quit work for her husband,” she said.

— With reporting by Charlotte Alter 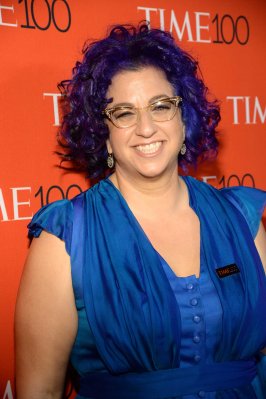 OITNB to Feature Character Based on Martha Stewart
Next Up: Editor's Pick