Workers filing into Blue Bell’s creamery in Broken Arrow, Okla. to scour the equipment in the wake of a lethal listeria outbreak were greeted by a surprise banner from the local community.

‘s Blue Bell,” read the banner from the Chamber of Commerce, filled with hand-scrawled messages from local supporters. “Keep the faith” one resident wrote.

The support from Broken Arrow comes amid one of the worst contamination scandals in the company’s 108-year history. Three people in Kansas died after eating ice cream contaminated with a lethal bacteria, Listeria monocytogenes, prompting a nationwide recall of Blue Bell products. After the bacteria was traced back to a machine in Blue Bell’s Oklahoma plant, management suspended all operations there on April 3, sending some of its roughly 250-strong workforce on paid leave until further notice.

“We hope that they’re able to get this corrected and get back into production mode as soon as possible,” said Wes Smithwick, president of Broken Arrow’s Chamber of Commerce. “They are the kind of company you wish you had dozens of in the community.”

The closure sent ripples through Broken Arrow’s community of about 100,000 residents near Tulsa—”a suburb of a suburb” as Smithwick calls it. Local officials are concerned for the future of Blue Bell’s workers and also worry about losing a company that contributed to local civic organizations. That’s why they enlisted Roscoe T. Rooster, the mascot from the town’s Rooster Day festival, to rally around the Blue Bell banner.

Smithwick said that while the local economy is strong, with an unemployment rate just shy of 3%, there is still concern that if Blue Bell does not recover, layoffs will follow.

“Obviously there would be an economic impact to the immediate area,” he said.

While Blue Bell’s workers are still being paid, and Broken Arrow’s residents have not felt an economic pinch from the shutdown, the food poisoning scandal has cast a lingering shadow over the company’s operations. Blue Bell expanded its recall on Monday after tracing a second listeria contamination to its plant in Brenham, Texas.

“We are heartbroken about this situation and apologize to all of our loyal Blue Bell fans and customers,” Blue Bell CEO and president Paul Kruse said in a public statement. Investigators are still determining how the bacteria took hold in the Broken Arrow and Brenham plants. It’s this lack of certainty and continued bad news that has some of the town’s residents on edge.

“The Broken Arrow factory remains closed, and will remain so until we are confident we have resolved the issues there,” Blue Bell spokesman Joe Robertson said in an emailed statement to TIME on Tuesday. “All the employees will remain on the payroll, and some have been brought down to Brenham, Texas, to help out here.”

“Everyone is concerned about the issues,” he added.

Not quite everyone. A woman who identified herself as the manager at Freckles Frozen Custard, a popular nearby ice cream shop, noticed sales improved “a little bit” since the listeria scandal broke. But she was too busy helping customers to comment any further.

Read next: How Ice Cream Gets Contaminated—and Sometimes Kills 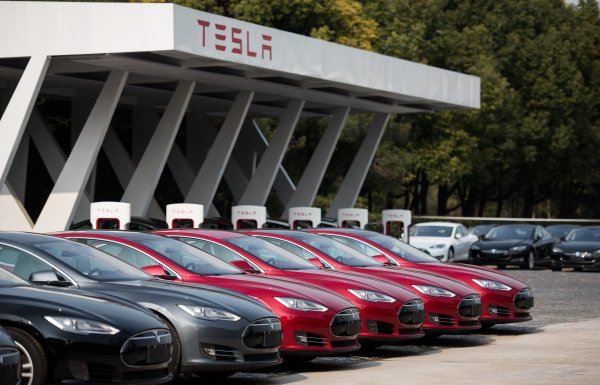 How Google Almost Bought Tesla
Next Up: Editor's Pick