When Hannah Schmid and Garrett Chaney met in preschool, they instantly gravitated toward each other without saying a word.

Hannah, who has cerebral palsy and is non-verbal, and Garrett, who suffers from a rare neurological disorder called Cohen’s syndrome, became instant friends – and over 13 years later, on April 11, they went to prom together and were crowned king and queen.

“The love they have for each other is unconditional,” Hannah’s mother, Brenda, who lives in Fargo, North Dakota, tells PEOPLE. “It’s so pure and real.”

Garrett, 20, who needs help with everything from bathing to eating and getting dressed in the morning, started to sit next to Hannah, 17, every day when they were children.

“He could hardly speak then, but he had this communication book and every day something about Hannah was in it,” his mother Lori tells PEOPLE. “We didn’t see this friendship start to form because they were at school, but their teachers started to tell us about it.”

Although Hannah couldn’t go home and talk about Garrett, Brenda started to hear that he was a big part of her daughters day.

“Her smile couldn’t have been bigger when she was around Garrett,” Brenda says. “And that has never changed.”

Throughout the years, Garrett and Hannah have spent almost every weekend together and most days in the summer.

She goes to all of his baseball games, they frequent the local zoo and a nearby lake, and they exchange gifts on Valentine’s Day. Last year, he bought her a butterfly ring on the special day because he knows how much she loves them. They hold hands, and Garrett plays with her hair when they watch movies together. They both look at each other during a funny scene to make sure the other didn’t miss it.

Despite their disabilities, very little can hold them back. Garrett goes to concerts, and they attend many school events together and always embrace life.

“Garrett asked her to marry him,” Lori says, laughing. “He said they were going to get married in Vegas.”

Even when they can’t be together, they’re never too far away from each other. Garrett sleeps with a picture of Hannah near his head every night.

As Hannah and Garrett became closer, so did their families.

Lori and Brenda are great friends and recently went on an overnight trip together. The continue to be amazed on a daily basis by their children.

“I don’t know how I can describe the way they look at each other,” Brenda says. “How do you put a relationship into words when it’s not based off of words?”
Although Hannah can’t speak, she is extremely expressive. She smiles the second she sees Garrett and laughs at almost everything he says. She is always looking around and understands everything.

He too laughs with her, but is also very protective. “Hannah is my girl,” he tells everyone at school. “She’s taken.”

Both Lori and Brenda say Garrett always knows what Hannah is thinking and even helps feed her at school, which is done through a feeding tube. Hannah has spent time in the hospital over the years because of her condition and Garrett, who understands how severe it can get, becomes extremely concerned.

“He feels responsible for her and wants to make sure she’s healthy,” Lori says. “He will even take my cellphone and call Brenda to make sure Hannah is feeling okay.”

When it came time to ask someone to prom, there was no doubt in everyone’s mind that Hannah and Garett would go together.

“The fact that our children are even here to go to their prom is such a huge milestone for us,” Brenda says. “I never thought I would have the chance to buy Hannah a prom dress.”

Lori also admits how big this is.

“We have goals for our children but they’re different than parents who have healthy children,” she says. “While most teenagers at their high school are going off to college, our children will be with us forever.”

And Brenda and Lori are both impressed with Hannah and Garrett’s classmates.

“The fact that they were nominated says so much about their high school,” says Brenda. “But we were speechless when they were crowned king and queen.”

Garrett, who was wearing a brand new tuxedo, pushed Hannah’s wheelchair around as everyone took pictures of them and clapped.

“The crowd went crazy,” says Lori. “It was such a surreal moment.”

Before the prom, about 20 of their closest friends and family gathered at Brenda’s house for a pre-prom dinner. Hannah had her nails and hair done and wore a green sparkly dress.

Both moms admit that while it might be an unconventional relationship, it’s also the most genuine.

“There is nothing artificial about the love they have for each other. It’s honest. They don’t judge the other. They accept each other for who they are,” Brenda says.

Although only the only people who truly understand Hannah and Garrett’s relationship are the ones closest to them, their parents say everyone can understand one thing – true love.

“It doesn’t matter if you’re disabled or not. Everyone needs love, compassion and understanding from others. We can’t live without it,” says Lori. 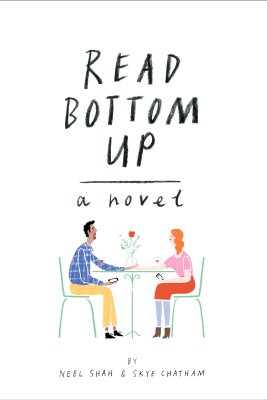 This Book Perfectly Captures All Your Insecurities About Dating
Next Up: Editor's Pick