Some six weeks after one of India’s largest states banned the consumption and sale of beef, prompting widespread outrage, consternation and existential questions for those who depend on the meat for their livelihoods, one of its towns has deployed a rather unique way of ensuring compliance.

Police in Malegaon in the western Indian state of Maharashtra are making sure no one slaughters the bovine creatures by taking photographs of each and every cow, calf and bull (along with their owners) in the town, the Indian Express reports.

The photos are then tabulated in the imaginatively titled “Cow, Bull, Calf” register at each of Malegaon’s seven police stations.

Cow slaughter has always been banned in Maharashtra under a law dating back to 1976, but the government’s attempt to expand it to include bulls and bullocks in 1995 was only officially implemented this year. The move caused a great deal of controversy, with many accusing the Hindu nationalist Bharatiya Janata Party of Prime Minister Narendra Modi of unfairly targeting minorities (cows are sacred in Hinduism, and a significant portion of the country’s cattle traders are Muslims, while beef is mainly consumed by impoverished lower-caste communities).

“We aren’t picking and choosing,” the town’s additional superintendent of police Sunil Kadasane told the Express. “Every cattle owner — Hindu or Muslim — will be a part of the exercise.”

The government justified the beef ban on Monday, the Times of India reported, claiming to the Bombay High Court that it was a “reasonable restriction” and did not violate food-security laws as a public petition alleged. Maneka Gandhi, India’s Women and Child Development Minister, advocated the expansion of the ban to the entire country in an interview Monday night.

A total of 312 cattle belonging to 174 owners have been recorded in the three weeks since the photo initiative began — right down to the address, occupation and family members of the owner as well as from whom the animal was purchased, and an undertaking signed by the owner that reads, “We will neither slaughter nor give away our pet for slaughter.”

The police register has received mixed reactions from Muslims within the Malegaon community.

“If it’s a law, it’s a law,” Nayim Rehman, who got his picture taken on the very first day, told the Express. “There is no harm in getting my cattle photographed by the police. It’s for my protection.”

But cattle trader Farookh Qureshi is furious. “It only targets Muslims, as if we love to slaughter animals,” he says.

Malegaon is no stranger to religious tensions, having seen communal riots following the infamous Babri Mosque demolition in 1992, as well as terrorist attacks in 2006 and 2008. But the slaughter ban’s impact is mostly being felt in its small-scale industries — leather and jewelry manufacturers as well as soap factories and bone-crushing units have all shut down.

The only ones truly happy, if you don’t count the cows, seem to be the photographers. “I will make some good money. There are several farmers who own cows in Malegaon,” Mohsin Shaikh told the Express. “A picture of each, and imagine a register full of my photographed animals.” 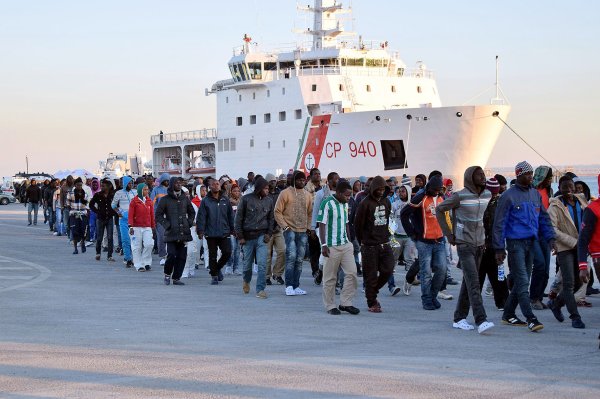 A Migrant's Harrowing Journey From Senegal to Italy
Next Up: Editor's Pick