Questions Remain Over U.S. Preparedness for the Next Oil Spill

In the midst of 2010 Deepwater Horizon oil spill, President Barack Obama’s administration declared a six-month moratorium on deepwater oil drilling. The spill was one of the country’s most devastating environmental disasters, and the freeze was intended to give the federal government time to assess what safety measures it had in place. But the moratorium passed, and drilling quickly resumed.

Now, five years later, offshore oil drilling is more frequent and is done to even greater depth. Since the BP spill, the federal government has approved more than 20 ultra-deepwater drilling expeditions, according to the Associated Press. Environmental activists say not enough has changed in the way the federal government oversees the deepwater drilling.

“The BP spill happened five years ago, but the next offshore oil disaster is still just one mistake away because the oil companies have fought putting the strongest possible protections on the books,” said Senator Edward Markey, a Massachusetts Democrat, in a statement.

Since 2010, the federal government has addressed the causes of the spill by heightening standards for the design and casing of deep-sea oil wells and nearly doubling the number of inspectors. Earlier this month, the Obama administration proposed increasing regulation of the blowout preventer, the last line of defense in preventing a spill. The blowout preventer failed in the Deepwater Horizon accident, one of the many factors

“A lot has occurred to make offshore drilling safer,” said Eileen P. Angelico, a spokesperson for the Bureau of Safety and Environmental Enforcement (BSEE), an agency created to monitor offshore drilling after the BP spill. “Government oversight of drilling has been strengthened…and there has been a significant increase in the number of offshore inspectors and technical experts.”

But environmental activists say the changes aren’t enough. The number of offshore incidents including fires, oil spills and explosions, among other things, has remained high over the past five years, according to data from the BSEE. There were nearly 2,800 incidents and 11 deaths between 2011 and 2014. There were 3,200 incidents and 32 deaths in the previous four-year period. More importantly, environmental activists say, many spills go unreported.

“The industry has destroyed hundreds of square miles of sensitive wetlands, while daily, and often unreported, leaks and spills pose serious threats to our fisheries, wildlife and natural habitat,” said Jonathan Henderson, who monitors field operations at Gulf Restoration Network, in a statement.

At the same time, oil companies have launched operations drilling at depths far greater than the 13,000 feet below sea level where the 2010 spill occurred, according to the Associated Press. Stopping a spill in the deeper and more complex wells would be far more difficult than it was to stop the BP spill—which eventually spewed an estimated 176 million gallons of oil into the Gulf.

But even if tougher regulations were able to prevent all potential oil spills, many environmental activists—and some officials in the federal government—argue that offshore drilling still needs to end. Drilling only deepens reliance on the fossil fuels that cause climate change, experts say. Indeed, Obama used the Deepwater Horizon debacle in 2010 as an opportunity to advocate for the “transition to clean energy.”

“There are costs associated with this transition,” said Obama at the time. “We can’t afford not to change how we produce and use energy—because the long-term costs to our economy, our national security, and our environment are far greater.”

Despite the environmentally friendly gesture, environmental activists say the president’s energy policy leaves much to be desired. The White House is pushing to open new areas to offshore drilling in the Atlantic Ocean.

“Atlantic and Arctic waters need to be taken completely off the table to oil and gas drilling,” said Natural Resources Defense Council Executive Director Peter Lehner in a statement at the time. “All offshore drilling is risky, but the worst thing we could do right now is open up new, never-spoiled, or long-closed areas to the risks this industry poses.” 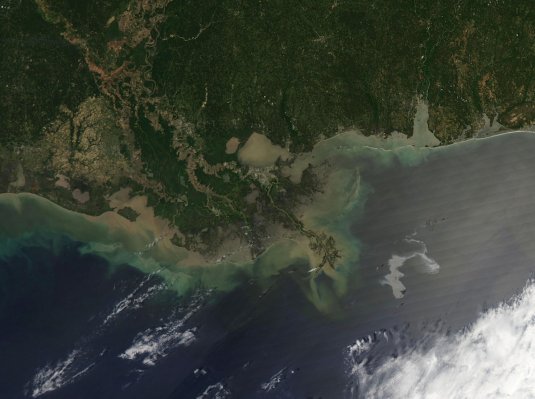 10 Years After Deepwater Horizon
Next Up: Editor's Pick