The Third Amigo Runs for President

Senator Lindsey Graham has watched two of his closest friends run unsuccessfully for President. Now, as he gears up for his own bid in 2016, the South Carolina Republican is hoping to use the lessons learned from their experiences to win.

Along with Arizona Senator John McCain and former Connecticut Senator Joe Lieberman, Graham has long been one of the “three amigos” — veteran politicians with an easy camaraderie built on a shared hawkish approach to foreign policy.

But while Lieberman’s bid for the Democratic nomination in 2004 failed to gain momentum and McCain’s primary campaign in 2000 and general election run in 2008 faltered, all three men think the timing may finally be right for Graham.

“The issue of national security will play more of a role in these primaries than anytime since Ronald Reagan was elected in 1980,” says McCain. “That I think is one advantage that he brings to the 20-person primary.”

Despite lackluster early polling numbers, Graham sees a straightforward path to the GOP nomination: staff up, advertise, set up a super PAC and raise $15 million to “get something going” in the crucial first states of Iowa and New Hampshire. Graham says he’ll “probably” make his decision official by late May or early June.

“For a guy like me it’s pretty simple,” says Graham. “I do well in Iowa and finish in the top tier in New Hampshire, I’ll win South Carolina. By the end of South Carolina there are three or four people left at the most.”

As he gets ready to run, Graham has looked to his two friends from the Senate for advice.

It may not help all that much. McCain recognizes that a vote for him in 2008 doesn’t necessarily translate to a vote for Graham. (“The one thing about the people of New Hampshire is they make up their own minds,” he says.) And overall the importance of having Lieberman and McCain by Graham’s side may matter more to members of the media — the return of the three amigos! — than to actual voters in a presidential race already crowded with at least six other formidable current and former Senators and governors.

But Lieberman and Graham have done more than offer an encouraging word. In March, as Graham became more vocal about his intentions, he spoke at a Capitol Hill event run by the Foreign Policy Initiative, a nonprofit think tank run by a former Lieberman staffer. Many staffers on Graham’s Security Through Strength PAC have McCain ties, including its spokesperson and two of its senior political advisers, while Graham’s New Hampshire visits have been shadowed by two other top McCain supporters.

“They’re a lot of McCainiacs up here still,” said Graham Saturday at a New Hampshire GOP conference featuring a score of presidential hopefuls.

McCain, who has reiterated the importance of the New Hampshire primary in his conversations with Graham, says his friend would thrive in the small group format that dominates the early months of jockeying. And Lieberman considers Graham’s humor and straight talk a major asset.

“He won’t hesitate to say things that don’t always poll well,” says Lieberman. “I think that will be very appealing first to Republican primary voters and to a state like New Hampshire.”

In Graham’s mind, both Lieberman and McCain would have reached the White House at some point if it hadn’t been for events largely outside of their control. In 2000 the Gore-Lieberman ticket lost by only hundreds of votes in an election with over 100 million votes cast. “You can’t get any closer,” says Graham. In 2004, Lieberman ran for the Democratic nomination but “time had passed him by.”

In 2000, McCain lost the primary to George W. Bush. Then in 2008, he lost the general election in part because of the collapsing economy and Bush’s unpopularity at the tail end of two terms in the White House. “I don’t think there’s anything John could have done differently,” says Graham.

Graham wasn’t always intent on running. Even among his closest friends, it wasn’t clear that he wanted to pursue the White House until December, a few weeks after he cruised to take a third Senate term following a primary where he torched six challengers. Graham says he had a “long talk” with McCain and called Lieberman to ask him what he thought about making a run to be the 45th President.

“I said to him that there’s nothing to lose,” Lieberman told TIME. “This is not sort of a desperate run to be President. This is, I think, an exploration and a feeling that he wants a larger audience for his ideas.”

“That meant a lot to me,” says Graham of the phone call with Lieberman. “That encouraged me … I know what’s coming my way in terms of the money and scrutiny. I understand that. But what I wanted basically was somebody who I admire, who’s been on the world stage at the highest levels.”

“He really believes I should do it,” he adds. “That made me more likely to do it. I think if he had been sort of patronizing I’d have thought twice about it.”

Then Graham had a “reinforcing moment” in February, when he sat in the aisle of a plane headed from Munich to Andrews Air Force base between Lieberman and former Arizona Senator Jon Kyl, who Graham says is helping form his campaign organization. Graham peppered them with questions for about an hour about how he should run while the other two mentors discussed the financial and personal pressures of running against a tough field in a Twitter-paced media environment. Graham said they urged him to build off of his performance at the Munich Security Conference, which Bret Stephens of the Wall Street Journal called the “most impressive” in a lineup that included Vice President Joe Biden and McCain.

In two phone interviews lasting nearly 45 minutes combined, McCain and Lieberman both proved long-winded in their support of Graham. McCain calls him “like a younger brother to me” and says he’ll “do anything that he asks” when it comes to supporting Graham. Lieberman, who endorsed McCain in 2008 and has not ruled out crossing over again for Graham, says his friend has a “unique” track record of working with Democrats that could prove appealing to independent-minded voters in New Hampshire. While Graham has proved willing to go across the aisle to introduce major bills, introducing with his friends sweeping packages to reform the immigration system and address climate change, he hasn’t always proved successful in closing the deal.

Both Lieberman and Graham see the debates as key opportunities for Graham to shine. Lieberman says he doesn’t think he has ever seen Graham speak with a prepared text, noting that his friend writes by hand only outlines for major speeches. “When they pull out the teleprompter, then we’ve got trouble,” jokes Lieberman.

“He is an incredibly quick study — much quicker than I am,” adds McCain. “He can take an issue and he can digest it … He is really superb on his feet.”

McCain also thinks Graham will benefit from having studied his 2008 campaign. He recalls sitting in a hotel room with Graham as the South Carolina primary results were coming in, looking through maps of the state throughout the night before eking out a 3-percentage-point win over former Arkansas governor Mike Huckabee. “He was an immeasurable help in South Carolina,” says McCain. “We had to win that.”

Graham served as McCain’s stress ball, injecting some levity during the campaign’s long hours. In his interview with TIME, McCain claimed that one of Graham’s “favorite flicks” was the raunchy comedy Borat. “I don’t allege that Lindsey is a highbrow,” joked McCain. On the trail, McCain would needle Graham, telling reporters that his favorite restaurant was Olive Garden. On a rare free moment in Florida, McCain sought out the restaurant and the three of them went with their staffs.

“We went to like the first Olive Garden,” says Graham. “It’s like going to Mecca for me.”

“He suffers those jibes quite graciously,” says Lieberman. “John gets a line and he really runs with it.”

Their friendship, built over about a decade of committee hearings and overseas trips, has allowed the “amigos” to see Graham’s negatives too. In a race with more than a handful of strong competitors, both McCain and Lieberman wonder if he can raise enough money. Lieberman notes that Graham’s national recognition levels aren’t that high despite his TV appearances — he’s already been on five Sunday shows this year, more than Senators Rand Paul, Ted Cruz or Marco Rubio, according to Roll Call. And his interest in running hasn’t yet caught up to pollsters. One New Hampshire GOP primary poll in February evaluated 18 candidates, but not Graham, while the South Carolina’s GOP party didn’t put him on its 25-person online straw poll until mid-March.

“I don’t know if he can win the nomination or be President of the United States, but he is one of the most really unusual great American stories in people I have known in my life,” says McCain.

No matter what happens, Graham sees little downside in running for the White House.

“There’s a nobility in trying,” he says. 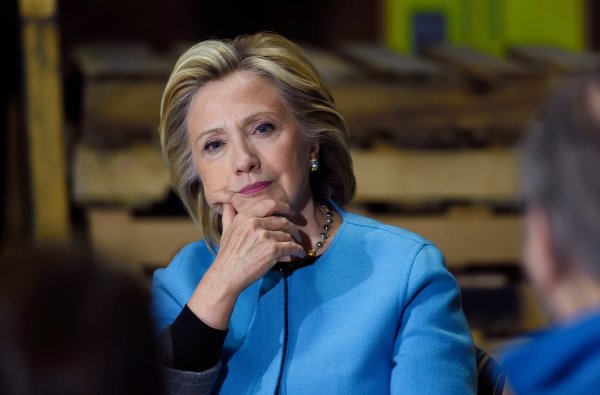