Michael Buble performs live at Allphones Arena on May 9, 2014 in Sydney.
Don Arnold—WireImage
Ideas
By Brian Moylan
Brian Moylan is a writer and pop culture junkie who lives in New York. His work has appeared in Gawker, VICE, New York magazine, and a few other safe-for-work publications.

Instagram updated their guidelines for what is acceptable content for the photo-sharing app today. For the record, close ups of nude butts, sexual intercourse, and genitals are off limits, but nudity in paintings and statues is A-OK. But there is a classification of sexualized images that are permissible under those laws but still need some rules, informal or otherwise, to determine what is alright and what is not. Luckily we also got the perfect example of this today as well from an unlikely source: Michael Bublé.

Your aunt’s favorite crooner posted a picture to his 1 million Instagram followers that his wife took of him at the gym standing in front of a woman whose back is facing the camera. Her derriere is barely contained by her tight, black workout shorts. “There was something about this photo [my wife] lu took ,that seemed worthy of instagram. #myhumps #babygotback #hungryshorts #onlyinmiami #picoftheday #beautifulbum,” Bublé wrote on the caption.

This photo upset many people because they claimed he was body shaming this woman and objectifying her appearance. Many labeled the photo a “creep shot,” a genre of photos men take of women they think are attractive in public without the women knowing the photo was taken. But there were many others who disagreed: The photo has more than 40,000 likes.

The issue isn’t whether the content of the photo is offensive but whether or not Bublé should be posting a photo of a random stranger on a social media service. Like so many people pointed out, it wasn’t her butt or what he said about it, but that it appears he did not ask her if she minded having her bum praised to more than 1 million people.

This is increasingly becoming a sticky issue given the proliferation of social media and people wanting to take pictures in public. If this woman were a street performer and he took her picture, would anyone have any issue of it, since we would assume that person would be fine with the attention? Is the same true for someone wearing a crazy outfit in line at the supermarket? Or what about when someone posted photos of some Philadelphia teens who allegedly committed a hate crime, which lead to their arrest? They didn’t give permission, but it’s pretty clear this was a great use of social media.

The idea of consent and public spaces has gotten very grey. I think we can all agree that posting a photo of someone working out at the gym isn’t that bad, but posting a photo taken in the locker room is entirely beyond the pale. It also becomes tricky when dealing with photos of women. There’s a fine line between admiring someone’s beauty and exploiting someone’s body, especially when it’s done without permission. However, many of Bublé’s supporters in this issue appear to be women.

It’s interesting that a famous person’s Instagram account is raising all these issues, because no one suffers as many creep shots as celebrities. Now, with a camera on every phone and a selfie stick in every pocket, it’s not just the paparazzi bugging the celebrities, but everyone who feels like they want to jazz up their Facebook feed. Does a fan sneaking a snap of Bublé picking up his morning coffee constitute as a creep shot?

Bublé has not taken the photo down, but he has issued a statement on his Facebook page. “I realize that a photo that was meant to be complimentary and lighthearted has turned into a questionable issue,” he says. “For the record, It hurts me deeply that anyone would think that I would disrespect women or be insulting to any human being.”

Personally I see little wrong with what he did (and I’ve been known to post Instagram photos of shirtless joggers in Central Park myself). While slightly lascivious, Bublé’s photo wasn’t lewd and neither was his caption. As far as creep shots go, this was pretty tasteful.

Yes, it’s wrong to say that someone is “asking” to be disrespected because of what she is wearing or where she is wearing it. Clearly this woman had no problem with everyone at the gym seeing her in those shorts, but would she have dressed differently if she had known that Bublé was going to invite a million strangers into their gym?

Whenever we leave our houses, we are entering a realm where we can all be documented and have our image dispersed without our knowledge or say-so, and we should all behave as such. That’s how we have to act until the social media age matures, and we can come to agreed upon standards of what is and is not acceptable behavior. Instagram can certainly write rules around content, but the rules about policing behavior are going to have to come from you and me. 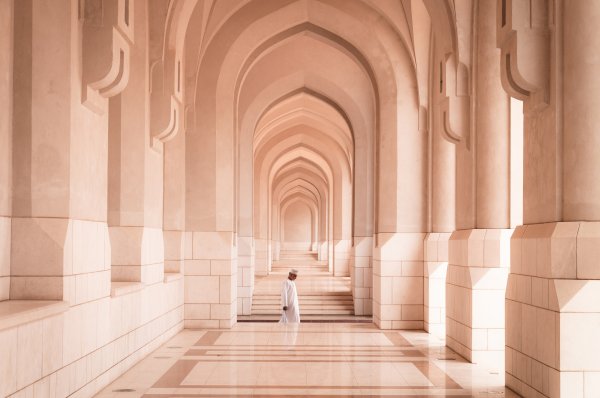 What Ayaan Hirsi Ali Doesn’t Get About Islam
Next Up: Editor's Pick