More than six months after the Canadian Broadcasting Corporation fired its popular radio host Jian Ghomeshi amid revelations of sexual assault and harassment, an independent report has found that the broadcaster itself had failed to previously investigate complaints made about their star. The report, released on Thursday, determined that Ghomeshi’s behavior was “considered to create an intimidating, humiliating, hostile or offensive work environment” and concluded that “CBC management condoned this behavior.”​​

After Ghomeshi was quietly fired from his gig hosting the CBC’s flagship radio program Q back in October, the 47-year-old star posted on Facebook that he had been dismissed because he enjoyed “adventurous forms of sex” and was being smeared by a jealous ex-girlfriend. Yet soon after the Toronto Star published a story featuring allegations by women who said that they had been punched or choked by the radio star without consent. The Star story also included allegations of sexual harassment by a former Q employee. The revelation spurred more women to come forward with their own allegations about Ghomeshi and, in November, the disgraced host was formally charged and now faces seven counts of sexual assault and one count of “overcome resistance – choking.” Ghomeshi has repeatedly denied that he inflicted any non-consensual violence.

For their part, the CBC said that the Ghomeshi was fired after executives saw what they described as evidence that he had physically injured a woman. But the company soon faced questions over when higher-ups were first made aware of Ghomeshi’s reported harassment of women in the workplace. Janice Rubin, an independent investigator and a Toronto employment lawyer who works in the field of workplace harassment, was hired to examine the CBC’s handling of Ghomeshi. Her report also found that the CBC had failed to provide its staff a workplace “free from disrespectful and abusive behavior.”

“Less prevalent, but also present in a small number of cases, was behavior that constituted sexual harassment,” the report adds, although it states that management was unaware of the allegations of harassment. The report says that when information about Ghomeshi’s behavior was shared “upwards,” it had a tendency to become “diluted,” and also cites three instances where management failed to investigate allegations and concerns about Ghomeshi’s behavior while he was working for the corporation.

The CBC also announced on Thursday that two managers — Chris Boyce, in radio, and Todd Spencer, in human resources — were leaving the company after having been placed on leave following the scandal. (The company declined to offer details on the executives’ departure.) 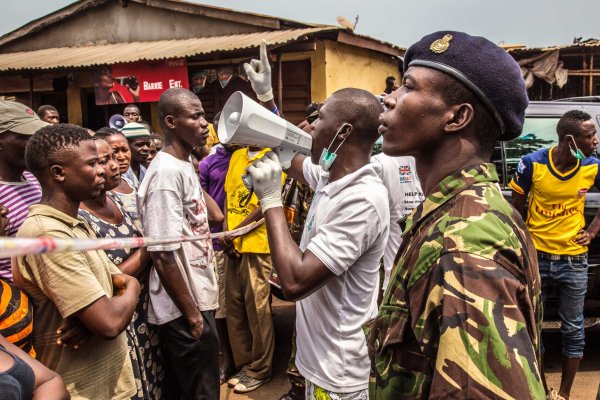 Ebola Nations Request Debt Cancellation and Billions in Aid
Next Up: Editor's Pick