Former Florida governor Jeb Bush weighed in Thursday on the delayed confirmation of Loretta Lynch, President Obama’s nominee to be Attorney General, urging the Senate to move along with its consideration.

Answering questions at a town hall with New Hampshire primary voters at the Snowshoe Club, Bush, an all-but-announced Republican presidential candidate, stopped short of explicitly calling for Lynch’s confirmation. Her nomination to replace Attorney General Eric Holder has been stalled for an unusually long 160 days over a Senate showdown on an unrelated sex-trafficking bill that includes a controversial abortion provision.

“I think that Presidents have the right to pick their team,” Bush told a crowd of about 95 voters and a horde of media.

“The longer it takes to confirm her, the longer Eric Holder stays as Attorney General,” Bush added, sending a signal to Republicans to lift their opposition to Lynch was only elongating the tenure of someone they like even less. “Look at it that way.”

Bush criticized Holder for having “politicized” his office, adding, “there should be some humbleness inside the Department of Justice.”

During the 60-minute Politics and Pie event, Bush was questioned about Obama’s rapprochement with Cuba and was challenged over his support of comprehensive immigration reform, telling one vocal critic, “I respect your view, but I don’t have to agree with it.”

He also addressed the dynasty question, joking that he’s not running for President to try to “break the tie between the Adams family and the Bush family,” referencing the second and sixth, and the 41st the 43rd Presidents, respectively.

Afterward, Bush, who brought a pair of key lime pies of south Florida’s famed Joe’s Stone Crab, sampled a blueberry pie, breaking his months-long paleo diet to sample some blueberry pie. “To hell with the diet … where are the french fries,” he quipped. 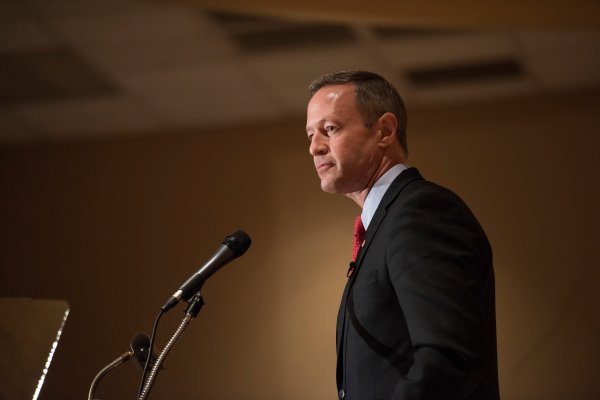