A model of a Boeing 777 aircraft is displayed as Monica Kelly of U.S. law firm Ribbeck Law attends a media briefing organized by the company at a hotel in Kuala Lumpur on March 26, 2014
Ed Jones—AFP/Getty Images
By Per Liljas

A U.S. firm has initiated a lawsuit against Malaysia Airlines and Boeing over the Beijing-bound Flight 370 that disappeared over 19 days ago and is presumed to have crashed in the south Indian Ocean, killing all 239 on board.

Chicago-based Ribbeck Law, which also represents 115 passengers aboard the Asiana Airlines Flight 214 that crashed in San Francisco in July, has filed a petition on behalf of Januari Siregar, whose son was on the Malaysia Airlines flight.

“We believe that both defendants named are responsible for the disaster of Flight MH370,” said Monica Kelly, lead lawyer on the case.

The petition is seeking to obtain the identity of manufacturers of various plane components and the company or person who last inspected the fuselage and provided maintenance. Kelly said additional pleadings will be filed against other potential defendants in the days to come.

Meanwhile, analysts are continuing to disseminate satellite data in order to pinpoint the wreckage. Based on signals sent out by the aircraft, officials reached the conclusion that the crash site was in the Indian Ocean. Now, a final partial signal from the aircraft is also being looked at for possible additional clues.

Chris McLaughlin, senior vice president of Inmarsat, the U.K. company that operates the satellite that picked up the signals, told the Wall Street Journal that this last transmission originated “with the aircraft for reasons not understood.”

At a Wednesday press conference in Kuala Lumpur, Malaysia’s acting Transport Minister Hishammuddin Hussein said French satellite images, taken on March 23, were showing 122 objects possibly connected to the missing plane. While some objects were small, one was about 23 m long.

The search recommenced on Wednesday, after gale-force winds and heavy rain halted operations the day before. Twelve aircraft and two ships are currently deployed. While Australian authorities, who are coordinating the search effort, have vowed to “throw everything we have” at the operation, experts have acknowledged the extreme difficulty in spotting and verifying pieces of the plane.

“Any search-and-rescue attempt will be hampered by untold quantities of debris,” an expert in flotsam at the Algalita Marine Research Institute in Long Beach, Calif., told the New York Times.

None of the objects that have been discovered in recent days have so far been retrieved or identified, and searches are being hampered by some of the harshest wind and wave conditions in the world. The current search area is also located in an area with great underwater volcanic activity, making the seafloor extremely rugged. 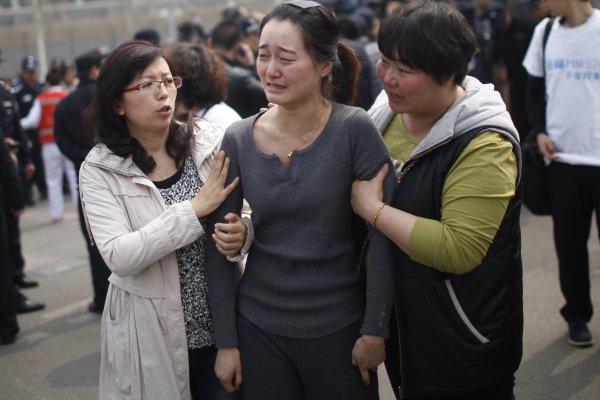 Families Angry Over MH370
Next Up: Editor's Pick