1. That voiceover is Mark Hamill as Luke Skywalker, apparently telling his offspring about The Force. It’s unclear which character he’s talking to, but it’s a safe bet this film is about the heroes of the original trilogy (Luke, Leia and Han) passing the torch to a new triumvirate (Finn, Rey and Poe) There’s even an analogy-completing shot of one character handing a lightsaber to another (and it looks just like Luke’s first lightsaber, built by Anakin Skywalker before he fell to the Dark Side).

2. That shot of the Imperial Stormtroopers in front of the red flag? That’s a different logo than the Empire of old—and over to the left, black TIE Fighters! This is a sign The Force Awakens might involve what’s known in the expanded Star Wars lore as the Remnant, a group of Empire loyalists who banded together after the events of Return of the Jedi (But all that didn’t officially happen. Anymore, anyway. Long story.) The shot’s also got a very evil, Nazi Germany vibe.

3. Kylo Ren, the movie’s Bad Dude, still looks super evil. But we don’t know much about him yet. There’s a shot showing somebody unveiling Darth Vader’s destroyed mask—could that be Ren paying homage to a lost hero of the Dark Side? (But that shot could also be Luke paying respect to his dead father, so who knows).

4. The sequence involving Finn’s reaction to a small attack fighter shooting people in what looks to be a ship’s hangar bay feels very telling. My guess is that Finn (who we saw in trailer #1 sporting a stormtrooper outfit) was a stormtrooper who decided to abandon his post after witnessing some kind of Imperial treachery. That would explain why he’s seen running for his life in the first trailer. This theory also fits in nicely with what the actor who plays Finn, John Boyega, said Thursday on stage at Star Wars: Celebration.

The Force Awakens hits theaters in the U.S. on Dec. 18.

Read next: This Is the Company Behind the Coolest New Star Wars Character 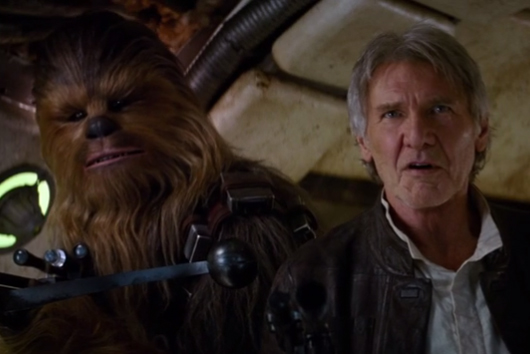 Watch the New Trailer for Star Wars: The Force Awakens
Next Up: Editor's Pick