Why Investors Are So in Love With Netflix Right Now

Nothing is ever straightforward about Netflix earnings–and last quarter was no exception: Netflix shares surged 12% in after-hours trading Tuesday after it reported earnings per share of 38 cents, a long way from the 63 cents a share that analysts had been expecting.

To explain that disconnect, you either have to conclude that Netflix investors have lost their minds or that there’s something else they saw and liked in the numbers. With Netflix, it can be both at once.

Because it’s as if there are multiple companies being analyzed here: the one poised to take over the world, or the one that is breaking the bank to get there. The stock that’s risen 4,000% over the past decade, or the speculative stock with the PE ratio above 160. In the case of Netflix, there’s plenty of room for both arguments.

One reason investors were willing to overlook the big earnings miss is that much of it was caused by the strong US dollar, which lowered international revenue 48%. Without the foreign-exchange losses, Netflix would have reported a 77-cents-a-share profit, above the Street’s expectations. As it was, Netflix reported a $14.7 million net profit, less than half the $35.8 million profit a year ago.

That was largely because of new original programming the company has creating, like the third season of House of Cards and the debut of new Netflix creations like Tina Fey’s Unbreakable Kimmy Schmidt and the star-studded drama Bloodline. Netflix has been cultivating series that can appeal in the US as well as abroad, and the new subscriptions suggest it’s working for now.

This quarter, the company is rolling out even more original content, such as the Marvel series Daredevil, released last Friday; a documentary series, Chef’s Table; Grace and Frankie, a comedy starring four Emmy award winners; Sens8,a scifi series created by the Wachowskis; and the return of Orange Is the New Black. Those should keep new subscribers signing up, but they’re also adding to spending.

It’s the mounting spending that the Netflix bears often point to. Streaming content obligations (basically, licensing fees for titles coming in the future) rose to $9.8 billion in the last quarter from $7.1 billion a year ago. These figures don’t necessarily affect the current income statement as much as give an indication of how spending will happen in the future, but they are daunting numbers nonetheless.

For the last quarter’s spending, Netflix offers another home-brewed metric, contribution profit. It’s revenue minus content spending and marketing expenses, so it excludes tech infrastructure or administrative costs. It’s an unorthodox metric, but it at least shows how, as Netflix pushes into new markets, content and marketing are performing against revenue.

On a video call discussing earnings (like its home-brewed metrics, Netflix has its own style of conference call, where a pair of rotating analysts ask questions on a Google hangout), CFO David Wells was asked about how long the spending would keep growing. He reiterated a warning Netflix has made before, that the losses could grow throughout 2015, thanks in good part to marketing in newer markets in Europe and Asia.

“We’ve said we are committed to running the business at global breakeven and we have ambitious plans for international growth,” Wells said. “We’ll have some bigger launches, and we’ve described them as meaningful and significant investments in back half of this year. So you should expect those losses to trend upward and into ’16, and then improve from there.”

The case Netflix has been making has been that it’s spending aggressively to take advantage of a global, long-term trend away from traditional broadcast and cable TV and toward TV streamed over the Internet. Others, like HBO, Hulu and possibly Apple are approaching the same market, but Netflix is racing less to compete with them today than to be ready as the audience and demand for Internet TV emerges.

To get there, Netflix has made it clear it will spend what it needs to, even at the risk of losses or shrinking profits this year. Future content obligations are growing, Wells said, but not faster than current revenue. The company’s big bet is the spending today will translate into faster growth and more profit starting in 2016.

This explains why subscription growth is so closely watched. It’s the clearest measure of whether the spending on new programs and new markets is actually delivering. The bulls believe this long-term growth will come as Netflix has promised.

What it doesn’t explain is why the stock sees such volatile swings whenever Netflix reports its quarterly earnings. For that, you need to look to the stock speculators, who have for years driven Netflix shares to euphoric heights that make its executives uncomfortable, if not themselves.

Netflix’s business may be as bullish as ever, but that doesn’t mean the stock price is fairly valued. It rose $56 to $531.50 on Tuesday’s earnings, making it worth 162 times the profit Netflix is expecting this year. Netflix is making some risky but realistic investments in its future growth. But that risk is nothing compared to what investors are taking on by buying at such a crazy valuation. 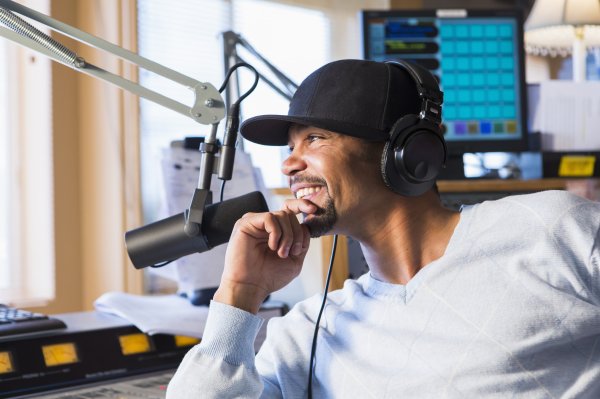 Why Musicians Want Radio Stations to Start Paying Them
Next Up: Editor's Pick