U.S. Senator Marco Rubio announces his bid for the Republican nomination in the 2016 U.S. presidential election race during a speech in Miami, Fla. on April 13, 2015.
Joe Skipper–Reuters
By Alex Altman

When he announced his campaign for President on Monday, Sen. Marco Rubio noted that not everyone in his party was thrilled about the idea. “I have heard some suggest that I should step aside and wait my turn,” the Florida Republican told supporters gathered at Miami’s Freedom Tower.

Rubio wasn’t just alluding to critics who question his decision to run for the White House while still in his first term in the Senate. He was also talking about some of his allies on Capitol Hill, who were tracking his deliberations for an entirely different reason.

The freshman Senator, 43, is also up for re-election in 2016. And when he jumped into the race for the White House, Rubio reaffirmed his decision not to defend his Senate seat. “If you’ve decided that you want to serve this country as its president, that’s what you should be running for,” he explained to NPR in the wake of his campaign launch.

Rubio’s decision to ditch the Senate puts the GOP in a bit of a bind. Republicans recaptured the chamber last fall, but in 2016 they will be defending 24 seats to the Democrats’ 10. With a shaky majority and an unforgiving electoral map this go-round, the GOP was counting on Rubio — a proven fundraiser with name recognition and some cross-party appeal — to win re-election in one of the nation’s few true swing states.

Instead Republicans now seem destined for a contested primary and competitive general election that will force them to spend extravagantly to keep the seat. “It’s a problem,” says a former senior official with the National Republican Senatorial Committee (NRSC). “The challenge that Rubio presents is that there’s a $20 million hole that was just blown in the NRSC budget.”

To skirt this problem, some Republicans quietly sought to persuade Rubio to stay in the Senate, arguing he faced an uphill contest against former Gov. Jeb Bush, a fellow Floridian who has been soaking up the support and largesse of the party’s most powerful donors. If strategists in Washington fretted about shelling out millions to protect the seat, some GOP operatives and donors in the Sunshine State were shocked Rubio would run against Bush, who remains a dominant figure in the state and whom Rubio has described as a mentor.

“There’s a lot of angst about him running” for President, says one veteran Republican consultant, who believes Rubio’s bid for the Oval Office is a long shot. “He would’ve held onto the [Senate] seat. He’s a terrific fundraiser, and it probably wouldn’t have been as competitive.”

Republicans have a deep bench in Florida. “Florida Republicans have consistently demonstrated a proven capacity to win statewide races and we look forward to electing another strong Republican like Senator Rubio,” says Kevin McLaughlin, deputy executive director of the NRSC. But the GOP Senate campaign arm may struggle to recruit a candidate of comparable strength. Already two top potential candidates, state chief financial officer Jeff Atwater and former state House speaker Will Weatherford, have passed on the race.

Meanwhile, U.S. Rep. Patrick Murphy has announced a run for the Democratic nomination. In the absence of Rubio, the race could be one of the nation’s toughest. Last month the Democratic firm Public Policy Polling surveyed hypothetical match-ups between eight leading prospective contenders from both parties; on average, the Democrat led by less than one point. Rubio, in contrast, was running well ahead of top Democratic rivals.

That’s why some Republicans are holding out hope that he reconsiders his decision if his presidential run fails to gather steam. As Rubio has noted, Florida election law bars a candidate from running for two offices on the same ballot. But the filing deadline to jump into the Senate race isn’t until May 2016, leaving plenty of time to test the waters in Iowa and New Hampshire. It would hardly be an unusual strategy. Fellow Republican Sen. Rand Paul is running for re-election in Kentucky as he mounts a bid for the White House after lobbying the state party to change its election laws to allow him to do both.

But Rubio has always been a man in a hurry, and as he’s confessed to allies, the Senate’s sclerosis has frustrated him. This dissatisfaction with the job helps explain why he’s ready to relinquish it for a shot at the presidency. And some longtime Florida political hands argue Rubio’s stock in the GOP primary is undervalued.

“There were a lot of Republicans who were shocked, at times even indignant, that Marco would step out of line,” says Steve Schale, a Florida Democratic strategist who served as a top adviser to both of Barack Obama’s Florida campaigns. “I’m in the camp that thinks he’s going to do better than most people have been saying.”

With reporting by Alex Rogers and Zeke J. Miller 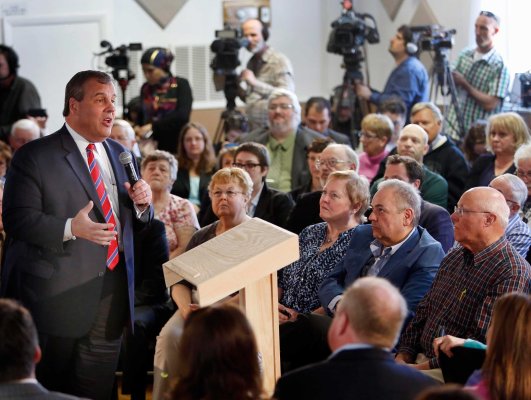 Chris Christie Pins Hopes for Comeback on Straight Talk
Next Up: Editor's Pick