Passion Pit’s third studio album Kindred is out April 21. It’s been a long time coming: the band’s frontman, 27-year-old singer-songwriter Michael Angelakos, had to take a break from touring for his 2012 album Gossamer to focus on treatment for bipolar disorder, a condition he’s grappled with for nearly a decade.

In conversation with TIME, Angelakos discussed how his new album shows how far he has come with his recovery and his surprising dream collaborator.

TIME: A few years ago, you said you wanted your next record to be about “real love” and be something “optimistic,” because you felt like you hadn’t written an optimistic song in more than a decade. Did Kindred turn out that way?
Michael Angelakos: It is certainly a much more optimistic record. It’s autobiographical. I’ve never been in a more stable place where I can now look to the future [and] think of all the things I want to make better [and] healthier and be happy. There’s obviously tons of frustration and confusion all over the record, but that’s part of figuring it all out.

So what’s the album about?
Growing up. It’s all the things I wish I had been doing instead of dealing with all of the complications from my disorder. It’s also about figuring out my relationships with other people and how to deal with love in a very real way.

Who are these other people?
Friends. There’s this idea that comes up on the album of being alone but together. The idea of feeling like I’m around all these people, but I’ve been really alone. I’ve felt that way for most of my life. Three years ago, I would have said I have two friends. That was all due to the catastrophic events that took place around Gossamer. I think that’s part of growing up—starting to realize who your friends are and what constitutes family. I’m in a place where I can finally see the amazing support system I have that’s not just doctors. I haven’t been able to see all the love that is all around me and celebrate it in any way. This album is a celebration of that.

Were you really writing about your brother in “My Brother Taught Me How to Swim”?
That speaks volumes in regards to the album thematically. My brother is only three years younger than me, but as we’ve grown older, we’ve grown closer and closer.He is everything I’ve ever wanted to be. He is so selfless. He will take time out of his day for anyone.

You’ve appeared in PSAs to talk about coping with bipolar disorder. What are the biggest misconceptions about mental illness?
People are like, “Well, what would you do if you weren’t bipolar?” I’ve been asked that so many times, and it’s one of the most condescending questions. What would I do? I’d probably be seven albums deep because the main reason why I haven’t been able to finish records or write more is because of my disorder. Men have the hardest time actively pursuing help because they find it emasculating. So the best thing I can do is continue to make and create things that can show people that it doesn’t matter if you have it or don’t have it. You’re always going to be able to be prolific and healthy as an artist.

A fun question: Are there any other stars you’ve dreamed of collaborating with?
It’d be pretty awesome to do something with Madonna. She’s still crushing it. I’ve had this obsession—I’ve always wanted to do something with RuPaul. [He’s] total and utter genius. There are few people I can listen to and agree with a lot of the time. He’s so intelligent. Insanely witty. He’s hacking culture. He’s a huge inspiration as a human being. You want to talk about accepting love—RuPaul is a great person to quote. 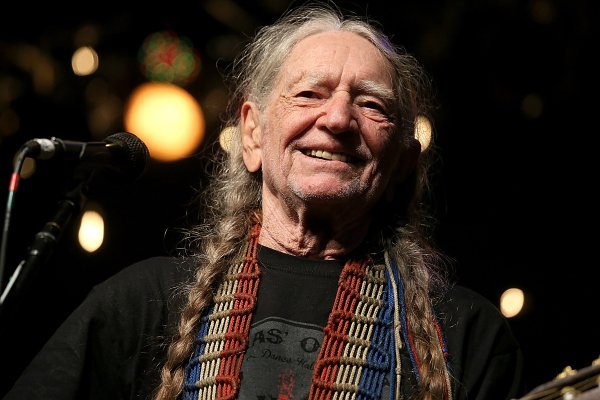 Willie Nelson to Launch His Own Brand of Marijuana
Next Up: Editor's Pick