A mountain lion that had been hiding under a Los Angeles home since Monday is finally gone, officials said.

The lion, known as P-22, became famous in the area after National Geographic photographer Steve Winter captured an image of the animal in front of the Hollywood Sign. P-22 spends most of his time in Griffith Park, in the Santa Monica Mountains, but on Monday wandered into a crawlspace under the home of Jason and Paula Archinaco.

The big cat was discovered by two workers who were installing a security system in the home. “I didn’t think for two seconds that it was a mountain lion in my house,” Jason Archinaco told the Los Angeles Times. “If someone says Bigfoot’s in your house, you go, ‘Yeah,’ and you stick your head in there.”

P-22 had to cross two major freeways in order to reach Griffith Park, a feat that has made him into something of a big cat celebrity. The National Geographic shot turned him from wildlife celebrity to bona fide star, and scientists have attached a GPS collar to help track his movements.

To get P-22 out from under the home, officials from the Department of Fish and Wildlife poked the mountain lion with a pole, then threw tennis balls and bean bags at him on Monday. Ultimately, they decided to see if he would leave on his own overnight. By Tuesday morning, P-22 was nowhere to be found. 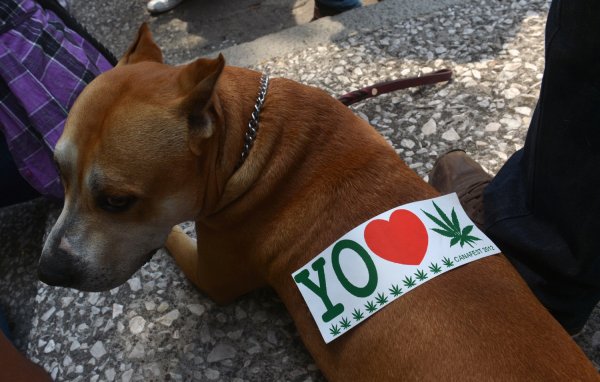 Marijuana Treats for Dogs Are Now a Thing
Next Up: Editor's Pick