One thing 2008 and 2012 taught us: Black women are the voting bloc to watch. According to the Center for American Progress, “In 2012, Black women voted at a higher rate than any other group—across gender, race, and ethnicity—and, along with other women of color, played a key role in President Obama’s reelection. The following year, turnout by women of color in an off-year helped provide Terry McAuliffe (D) the margin of victory in the 2013 Virginia gubernatorial election. Notably, in both of their respective elections, President Obama and Gov. McAuliffe lost a lion’s share of White women voters, but overwhelmingly captured the votes of women of color.” It’s true that Black women are becoming much more involved with the political process, flexing their muscles by engaging in the issues and making their voices heard. But are these voters a guarantee for Hillary Clinton?

“I think Black women are ready for Hillary,” Georgia House Minority Leader Stacey Abrams tells Essence. “She represents not only the first woman president, but a continuation of policies that have been geared towards lifting women, communities of color, the poor—those demographics that have too often been left behind by Republican policies. I think her candidacy reflects the needs of Black women, in that she is going to talk about the issues that will help better their lives.”

Black women voters present a unique opportunity for Hillary, because, according to CAP, “[a]s their numbers increase and their participation grows, women of color will increasingly have the chance to sway electoral results, influence which candidates run and win, and play a greater role in shaping the policy agenda. Again, this new reality becomes apparent when one considers that women of color are the fastest-growing segment of the country’s largest voting bloc: women.”

Though the historic nature of her candidacy may put Hillary in a position to deliver another transformational moment for America—this time for gender equity—there is much work to be done before she can win over any constituency. First: showing she has a vision for tackling their greatest concerns.

Anti-violence activist and writer Wagatwe Wanjuki says that while a lot of people are excited about the prospect of a female president, she has some reservations. “I am waiting for evidence that she gets how we women of color are affected by issues in ways that are different from our white counterparts,” says Wanjuki. “What are her thoughts on the Hyde Amendment? [The amendment that prohibits public funding for abortions, making the procedure inaccessible for low-income women of color.] As president, how is she going to use her bully pulpit to address the high rates of gender-based violence in our communities? What plans does she have to reduce our unique barriers to achieving quality health care?” 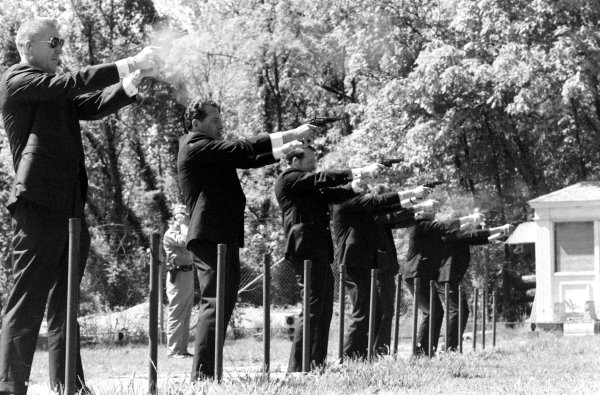 See Photos From a Secret Service Fitness Test in the 1960s
Next Up: Editor's Pick