Bobby Holland Hanton as Thor in The Avengers: Age of Ultron
By Sarah Begley

Action movies base their success on two factors: big names and big stunts. But usually, the actors who pack in the crowds aren’t the ones leaping off buildings, walking through fire and running across trains, cranes and automobiles.

That’s where stunt doubles like Bobby Holland Hanton come in. The stuntman (and Dove Men+Care spokesman) is the muscle behind many of the best action roles of the past few years, from Batman (The Dark Knight Rises) to James Bond (Quantum of Solace). This season, you’ll see his work on Game of Thrones and in Avengers: Age of Ultron — as both Thor and Captain America. We caught up with Holland Hanton to find out what it’s like to perform the death-defying acts that make the movies so exciting.

TIME: How did you get into stunt work?

Holland Hanton: My background is gymnastics. I started gymnastics from the age of 4, and I started competing for Great Britain when I was 17 — that’s when I retired. I wasn’t sure what I was going to do, a little bit of a crossroads for me at such a young age. I decided to try and audition for live stunt shows, acrobatic shows, TV commercials where it involved free-running, parkour, things like that. Then I found out at 21 how the stunt work in films work and what the criteria was and the training program you have to do, and then I kind of got into it that way, and I had an audition at 23 to double James Bond in Quantum of Solace. Lucky enough, I got that job and I’ve not looked back.

It was a real eye-opener for me. I was 23, my first-ever job, and what a job to go into for your first one and try and learn from everyone. I was working for one of the best stunt teams in the world at the time, and they helped me and taught me so much. But I literally was like a deer in headlights, to be totally honest, at the beginning. I had to pick stuff up quickly, concentrate, work hard, to achieve what I was there to achieve. You know what people say about learning on the job? Well there’s not a better place to learn than the Bond set if you’re a stunt performer.

Yeah, I’ve been lucky to work on the last three, including Quantum, Skyfall and now just recently I was in Austria for seven weeks filming Spectre.

Great experience. It was freezing cold out there, but a lovely place, beautiful scenery, and I think we got some fantastic footage out there — it’s gonna be an amazing scene. It was great to work with the old team again, generally they’ve been the same team since Casino Royale. I’m looking forward to that coming out in November this year.

Do you work with Daniel Craig at all when you’re doing those films?

On Quantum of Solace I worked quite closely with him because I was his stunt double, I did a lot of his stunts for him in that movie. But Skyfall and Spectre I didn’t see him that much, I wasn’t his stunt double on those two movies, so I didn’t get to see him a great deal, but it was good to see him when I did.

You’ve also worked a lot with Chris Hemsworth, right? Thor, In the Heart of the Sea …

Yes, actually, I’m now contracted to Chris, so I do all of his movies. I’m just about to start my fifth movie with him. He’s fantastic, he’s really good to me, and he keeps his team very busy and keeps them close to his chest. He’s just like one of the boys. Same age, same sense of humor, and it’s a pleasure to work with someone who’s so good at their craft, so professional but also so down to earth and one of the lads.

So what’s the latest one you’re doing together?

The Huntsman, we start very soon.

How much do you have to resemble someone to be picked as their double?

What are some of the more challenging stunts you’ve had to do?

[There] are things that I have not a great deal of, for example fire work, fire burns, high falls. I did a 100-ft.-high fall in The Dark Knight Rises as Batman, which was pretty challenging. In Quantum of Solace, the rooftop sequence in Sienna, where I was doubling Bond chasing the bad guy, we were about 160 ft. up in the air. So there’s been a lot of high work, stair falls, but it’s all exciting and there are always new ways of doing things. One stair fall is never the same as another. You might have a different costume, you might have something preventing your vision, so every show’s different, and that’s what’s great about it, it’s never the same, it’s never mundane.

What’s the stunt you’ve had to do that you were most afraid of?

The adrenaline was going pretty fast when I had to do the 100-ft.-high fall on The Dark Knight Rises. That’s when Bane puts Bruce Wayne in the prison in India and he tries to climb out. I also did a full-body fire burn last year. It starts off as fear and that quickly turns into adrenaline and a feeling that’s quite hard to describe.

What was the fire scene for?

I can’t really say — it’s not out yet. But I’m hoping it’s as good as what it felt like.

What can you tell me about working on the new season of Game of Thrones?

It was a great experience, I’m a massive fan of the show anyway. When I got the call to go and work on that show, I was quite excited because, as I said, I’m a fan of it, but also to be part of the biggest TV show out there is a lovely thing to add to your CV. I tried not to listen too much to how the scenes were actually being played out because I obviously don’t want to ruin it for myself, but I did the best stunt job I could.

Are you allowed to tell me if you were doubling for someone in particular?

[Not] on Game of Thrones, I was a general stunt performer in all the big battles. I did some wire work, some fire stuff, some water stuff, some fights. As a general stunt performer, we did everything across the board on Game of Thrones. I was in Seville for two weeks and Belfast for seven weeks, so I worked on the show for just over two months, but we were pretty much nonstop the whole time.

You also have Avengers: Age of Ultron coming to theaters May 1. How was it working on that?

Yeah, what a great experience that was. When I watched the first film, I was instantly a fan. I came out of the cinema with goose bumps thinking, “I’d love to work on the next one,” and was fortunate enough to do that. [I was] stunt-doubling for Captain America in Korea and for Chris Hemsworth as Thor, so to double two massive characters like that in such a big [movie] was another great achievement.

Does an acting coach ever come in and direct you in that physicality, or is it just the stunt coordinator?

No, it’s just the stunt coordinator, the fight arranger, the director and the actor. We look at ourselves as doing the physical side of the acting, but the actors do it as well — there are so many actors I’ve worked with who love to do their own stunts, and they’re very good at it and more than capable.

Do you have three favorite characters that you’ve been a stunt double for?

Four: Thor, Captain America, Batman and Bond. But I’d love to add Superman to that list. You never know, fingers crossed, maybe one day that will come up.

Have you ever been really hurt?

You do get injuries, that’s just the nature of what we do. I did get a bad back injury on Green Lantern in New Orleans back in 2010, which put me out for a year. I had ruptured and herniated two discs and slipped my vertebrae. I had to have an operation and then the operation ended up giving me a disc and bone infection. So it was a bad time, it was a horrible end to the year. But that’s why our rehearsal period is so important, we try to eliminate as much danger as possible. Unfortunately you can’t stop every injury or bit of danger, because then it wouldn’t be stunt work. 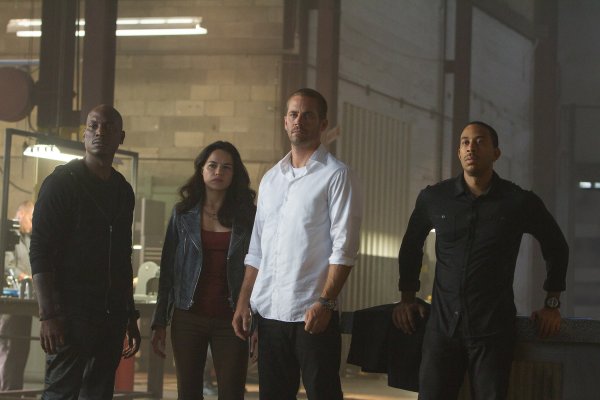 Furious 7 Is Now Bigger Than Frozen
Next Up: Editor's Pick