Dancing With the Stars Watch: No Dirty Dancing During Disney Week

To mark the halfway point in the competition on Dancing With the Stars, the show is celebrating with Disney Night, a.k.a. the best one-time cross-promotional event they put on annually! The contestants all slap on their Disney-themed Spanx and body glitter and dance to Disney songs while Disney characters prance around the stage, and the stars are forced to interact with animated characters that aren’t actually there. Luckily, it’s halfway through the contest, so the stars have started to think these shenanigans are normal. Julianne Hough got into the spirit of the evening by dying her hair cotton-candy pink (and presumably having small forest animals help her get dressed). Even Tom Bergeron got into the spirit of the night, promising that someone would magically disappear by the end of the night.

Suzanne Somers and Tony Dovolani: Suzanne and Tony were given the double whammy of being informed that they are in jeopardy and then being forced to open the show, which just seems unfair. Cut to rehearsal footage of Suzanne threatening to quit because she doesn’t think she’s good enough at dancing to continue. Tony gives her a pep talk, but the producers may be trying to warn the audience to brace themselves for Suzanne’s impending departure. Before we find out if she’s leaving, she has to make it through a jazz routine to “He’s a Tramp” from Lady and the Tramp, which is a song that has a very different non-Disney meaning today and yet the song lives on. Despite a G-rated wardrobe malfunction, it was a solid routine. Len Goodman considered it her best dance ever. 28/40

Robert Herjavec and Kym Johnson: After last week’s tear-jerking ode to his mother (R.I.P.), the Shark Tank star was ready to tackle a quick step to the most apt song ever: “Step in Time” from Mary Poppins. The performance was like a preview of a childhood-robbing reboot of the classic, including super sexy chimney sweeps and Kym playing the beloved nanny (presumably after a fall in fortune lead her to work in a house of ill repute) wearing a low-cut shirt, red sequined leotard and a see-through skirt. Unfortunately, Robert’s performance gave the judges a lot of excuses to make “step in time” jokes as he lost his timing and was never able to make it up. 24/30

Patti LaBelle and Artem Chigvintsev: Patti cheered when she was told that she was in jeopardy, which is partially explained when the rehearsal footage shows her icing her knee and crying and promising Artem that she will never give him up, never let him down, never run around and hurt him. By the time she hit the ballroom floor she was smiling brightly and waltzing away to “When You Wish Upon a Star” while images of Pinocchio were projected on the floor. Strangely, none of the judges’ noses grew while assessing her routine deeming it solid, if unexciting. 27/40

Willow Shields and Mark Ballas: If you were wondering how Mark would top building an entire Hunger Games stadium inside the studio, this week he took Willow down the rabbit hole for a foxtrot to “Alice’s Theme” from Alice in Wonderland. The ballroom was filled with fog and dancing cards, and Mark wore a truly haunting white rabbit get-up that was so horrifying it explains why this show has a 10-plus rating (well that and Bruno’s mouth). While the judges admit they are starting to think that Mark’s over-the-top productions are distracting from the dance, it was still a well-executed routine. 34/40

Chris Soules and Witney Carson: After last week’s disappointing returns, Witney brought in a little backup to show The Bachelor star how it’s done — last year’s winner Alfonso Ribeiro. Alfonso gave Chris a few pointers, but it was all for nought because Chris pulled a calf muscle while rehearsing his quickstep to Hercules track “Zero to Hero” and devoted his energy to not whimpering while dancing. Len thought that Chris must have been channeling Hercules to dance on his injury. Carrie Ann Inaba thought it was his best dance ever and admired the fact that he showed a little leg in a dress and sandals and a headband (Erin Andrews asked him if he was missing Coachella, which was the best joke of the night.) 27/40

Noah Galloway and Sharna Burgess: This week, when Noah complained about his leg, Sharna tough-loved him and told him to stop acting like a baby. Noah seemed to love her lip. He flew into the ballroom on a magic carpet and foxtrotted to “A Whole New World” while dressed like Aladdin, which is definitely not “acting like a baby.” Bruno said watching Noah dance makes him believe in magic. Carrie Ann thought it lacked a bit of content, but didn’t really matter because he is simply incredible. 28/40

Riker Lynch and Allison Holker: Determined teen Riker has managed to find the manliest Disney character possible so he can simultaneously dance a paso doble and impress the teen ladies. He hits the ballroom dressed like Captain Jack Sparrow from Pirates of the Caribbean. Apparently that movie had a song called “He’s a Pirate,” and Riker owned it. The judges could barely contain their glee over the routine and even his competition couldn’t help but politely applaud from the balcony. Carrie Ann almost threw herself over the judges’ table to declare the routine, “The best everrrrr!” 38/40

Rumer Willis and Val Chmerkovskiy: Rumer has no interest in playing a Disney princess, but she is very interested in playing a Disney villain. So she put on her Ursula costume, and she and Val sambaed to “Poor Unfortunate Souls” from The Little Mermaid, which everyone mentions is “unconventional.” Carrie Ann said it was “odd and weird and out of this world,” but in the best way possible. Julianne couldn’t understand how Rumer made Ursula the Sea Witch the sexiest character in the Disney pantheon (um, has she seen Cogsworth the Clock?). Then Erin forced Rumer to snuggle with Minnie Mouse even though neither of them was into it, and Rumer was covered in purple body paint. 39/40

Nastia Liukin and Derek Hough: Bruno thought that Nastia’s and Derek’s jazz routine to “Love Is an Open Door” from Frozen captured the essence of the “wonderful world of Disney” and was “practically perfect in every way” (which is a quote from Mary Poppins, not Frozen, so get it together Bruno). The easily distracted Carrie Ann loved the routine, but was confused by their lip syncing. 38/40

In Jeopardy: Chris and Witney, Patti and Artem, Suzanne and Tony are all in jeopardy. It’s quickly revealed that despite her injury and her apparent desire to leave, Patti is still safe.

Going Home: Suzanne. For whatever reason, the audience apparently didn’t like last week’s Three’s Company–themed routine and failed to vote for the actress. Suzanne graciously bowed out of the competition, taking only enough screentime to shout, “I think all women my age should go on hormones!” And with that, Suzanne was out. 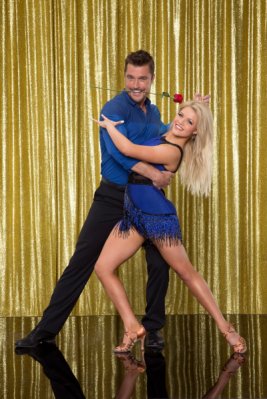 <em>The Bachelor</em>'s Chris Soules on <em>Dancing With the Stars</em>: 'I Am a Straight-Up Amateur'
Next Up: Editor's Pick