Obama Pivots to Latin America With Cuba on His Mind

The pivot to Asia may not have worked out terribly well, but spending spring break in Panama City turns out to be a welcome change of pace for President Obama. Every president says he’s going to pay more attention to Latin America, then ends up taking the region largely for granted while immersed in tar babies like the Middle East, which re-asserted itself with a vengeance after Obama’s heralded 2013 attempt to spend more time on China and Asia.

But the historic rapprochement with Cuba has brought breathless attention to, of all things, the Summit of the Americas, a largely ceremonial, traditionally moribund gathering of the leaders of the Organization of American States, the 35 countries of North and South America. The prospect of Obama shaking hands with Cuban President Raul Castro — realized at the Friday night official opening of the Summit, and confirmed by a statement from the National Security Council —made irresistibly personal the end of more than a half-century of official enmity, in a setting that let the entire hemisphere share the spotlight. (The White House confirmed on Friday that Obama had telephoned the Cuban leader.) Latin America may be staggering economically, and many of its prominent leaders tattooed by corruption scandals, but this weekend, at least, no one was pretending there was anything even remotely bigger at hand on foreign policy than the reunion of Washington and Havana.

The opening with Cuba animated the otherwise bland presentation to CEOs that was Obama’s first event in Panama City. “We want to congratulate you on your policy towards Cuba,” the moderator told the American President, to a round of applause. Obama himself seemed caught up in the energy at his next event, a speech to civil society groups. “I’m pleased to have Cuba represented with us, for the very first time,” Obama said, of Havana’s presence at the summit, from which it was barred (at Washington’s insistence) between 1962 and 2009.

He then delivered an ardent appeal for ordinary citizens to involve themselves in public policy, citing his debt to the American civil rights movement for the changes that led to his own historic election. Obama brought up Cuba again, asserting that the U.S. goal was not to “impose” change on the island but to empower Cubans to improve their own lives.

The loudest applause, however, followed Obama’s statement that, “The days in which our agenda in this hemisphere so often presumed that the United States could meddle with impunity, those days are past.” As the applause continued, he held up a finger. “But we have to be very clear,” he said, that U.S. support for groups who “spoke truth to power” should be viewed as altruistic rather than hegemonic. “We have a debt to pay, because the voices of ordinary people made us better,” Obama concluded. “That’s a debt I want to pay in this hemisphere and around the world.”

Resentment over the United States’ sometimes heavy-handed history in the hemisphere remains one of the engines of politics in the region. Anti-Americanism has proved a handy cudgel for leaders such as Nicolas Maduro, the embattled Venezuelan president who was a protege of the late, and much more effective Hugo Chavez. Venezuela has been a huge patron of Cuba, and Maduro arrived at the summit with a petition signed by several million Venezeulans protesting the threatening language in a recent Obama executive order imposing sanctions on Maduro officials implicated in abusing protesters and political opponents. Maduro’s first stop in Panama City was a memorial to the more than 500 civilians killed in the 1989 U.S. invasion of the city. He was greeted with chants of “Maduro, stick it to the Yankee!”

Just so the U.S. still knows where it is. 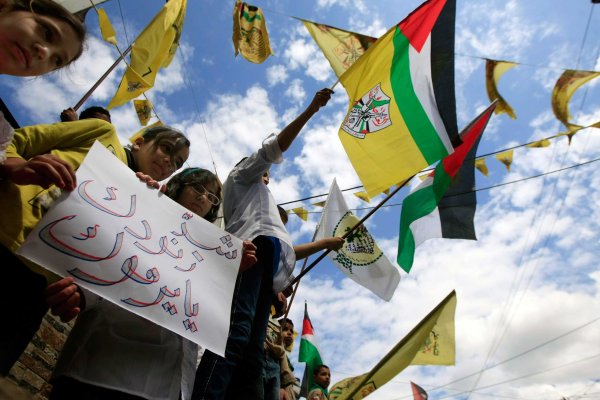 U.N. Warns of 'Slaughter' in ISIS-Held Refugee Camp
Next Up: Editor's Pick