Here's What It Was Like Buying an Apple Watch Today

I was pretty sure I wanted an Apple Watch before the presales began at a time so early in the morning there was no way my feeble brain could process it. But I couldn’t justify spending a few hundred bucks on A Very Nice Thing before getting some hands-on time with it, checking out the bands, figuring out what size I should buy and so on. All the Apple Watch permutations result in a much more complicated decision-making process than buying a new iPhone, where there’s only a small number of colors, storage spaces, and, more recently, sizes to choose from.

So instead of preordering an Apple Watch sight unseen, I headed to Apple’s flagship Fifth Avenue cube store this morning to see what the company’s demo process was like.

The first thing that caught my attention was the complete lack of a line. If you’re in New York City on an Apple launch day, you’re typically best off staying as far from The Cube as humanly possible. But because the Apple Watch wasn’t actually in stock today, there wasn’t the blocks-long line usually characteristic of Apple launches (that’s not an accident). There were plenty of other journalists on hand and a certain level of excitement to be sure, but it wasn’t nuts.

I arrived fifteen minutes before my appointment — Apple strongly recommends you have one — and right away got hooked up with an Apple Store employee named Bob, who was waiting by a table full of Apple Watches. Bob asked which models I was interested in trying. I told Bob I wanted to try the cheaper Sport model (which is what I thought I wanted to buy) as well as the mid-level Watch model with the Leather Loop bands (that band looks terrible in photos and I wanted to see if it was better in person. It was).

Bob put the various models on my wrist for me, which was a little weird — I’m (mostly) an adult and I can generally get a watch on my wrist correctly on the first try. I asked Bob if the Apple Watch came with an Apple Employee who would gently attach and remove the device every day for me. Bob said no. This was sad. I bet the people who buy the $17,000 Apple Watch get that.

The various Apple Watches I tried on were running a non-interactive demo loop. That was disappointing. I wanted to mess around with various apps and see what it was like to actually use the device, and I bet lots of other potential Apple Watch buyers do, too. Convincing fence-sitters would probably be a lot easier if they could get some true hands-on time with the device. There were kiosks set up that had more fully-featured Apple Watches, but you couldn’t wear them while you used them, so it wasn’t really the full experience of what owning one would be like.

After trying a few different bands and bodies, I decided my initial guess was correct: The 42mm Apple Watch Sport was the way to go for me. The Sport “Fluoroelastomer” band is surprisingly nice and comfortable, the bigger screen will be better for interacting with the device (but could be off-puttingly large if you’re used to a small watch), and the cheaper price tag means I won’t be totally screwed when the inevitable much-improved version two comes out like three weeks from now.

I told Bob I made my decision, and he pointed me to a kiosk in the back of the store that would let me pre-order my Apple Watch online. I decided to head back to the office instead and placed my order there (see ya, tax return). The official ship day for the Apple Watch is April 28, but Apple says my device won’t arrive until June — the cost of waiting til 11:30 a.m. to order one. But I’ll get it eventually. For now, I’ll just have to keep using my iPhone every time I want to read some WhatsApp notifications. Like some kind of backwards Neanderthal. Sigh. 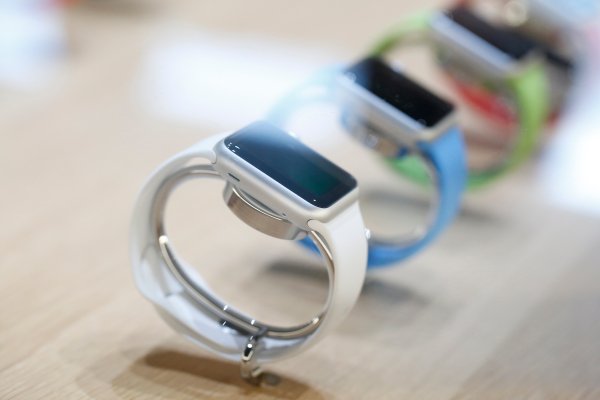 Apple Exec: Apple Watch Demand 'Will Exceed Our Supply'
Next Up: Editor's Pick