A colorful scarf is all that is left of Cicek Derek, who was 17 when she died a few months ago in the besieged city of Kobani, Syria, where her compatriots were unable to retrieve her body. Cicek was one of hundreds of young Kurdish female soldiers who have taken up the fight against ISIS. They’re part of the YPJ, or Women’s Protection Unit, an offshoot of the Kurdistan Workers’ Party (PKK), a Kurdish nationalist movement that has long fought a war of independence against Turkey.

Now the PKK and other Kurdish groups are at the forefront of the battle against the Islamic State of Iraq and Greater Syria, a militant group that would severely curtail the rights of women. It’s fitting that ISIS will be facing off against female fighters like 18-year-old Zilan Orkesh, who left her small village on the Turkish-Syrian border to join YPJ in 2011. When she killed an ISIS fighter for the first time, she began cheering loudly, hoping the sound would reach the ears of other jihadists. “I wanted to let them know that their worst nightmare had come true,” she says. “Their friend had been killed by a woman.”

But it’s not just the battle against ISIS that brings these women to a spare military camp in Syria, a half-hour from the front lines. Abdullah Ocalan, the imprisoned Marxist leader of the PKK, has promoted gender equality, a rarity in the macho Middle East. (The PKK is still listed as a terrorist group by the U.S., but the more pressing threat of ISIS has blunted those concerns.) To rural girls trapped in deeply conservative societies, the appeal could be strong. “In the past, women had various roles in the society, but all those roles were taken from them,” says 18-year-old Saria Zilan. “We are here now to take back the role of women in society.”

That fight has a cost. Several miles from the all-female camp, there is a fresh graveyard. Men are digging the earth, clearing space for new arrivals as the sun sets. A YPJ flag dances above a grave. Not far is Cicek’s home village, and the house where she once lived. Inside, Cicek’s three sisters and her mother sit around a portrait of the fighter.

Cicek’s mother Nasiba didn’t want her daughter to join the YPJ. “She was only 13,” Nasiba says. “She met a YPG member [an armed Kurdish force] at her brother’s house, and he started influencing her. And before we knew it, she left home and went to Mount Qandil [the PKK’s main base in northern Iraq]. She was 17 when she was killed.” Nasiba isn’t alone in her criticism. There’s something uncomfortable about girls barely into their teens leaving home to join a guerrilla army at Ocalan’s behest. Especially when–like Cicek–they don’t come home again.

But her older sister Rojin remembers the way that joining the YPJ seemed to transform Cicek. “She came back from Qandil after four years, and she was a different person,” says Rojin. “She was tough and confident.”

Once the sun sets, the village is dark: power has long been out here. The only lights seen are those of passing cars, among them a truck that drives slowly through the town. Revolutionary Kurdish songs play from megaphones attached to the truck. The music seizes the attention of young boys and girls hanging around the neighborhood. One by one they join the trail of people following the vehicle.

In a dark corner of the house, with a little bit of light falling on her face, Cicek’s sister stands in silence. She is listening to young revolutionaries chant along with the songs that the megaphones blare, songs about Kobani and martyrdom that urge the survivors of battle to rise and continue the fight. Rojin is the last person to leave the mourning caravan behind the truck, lost in thought. 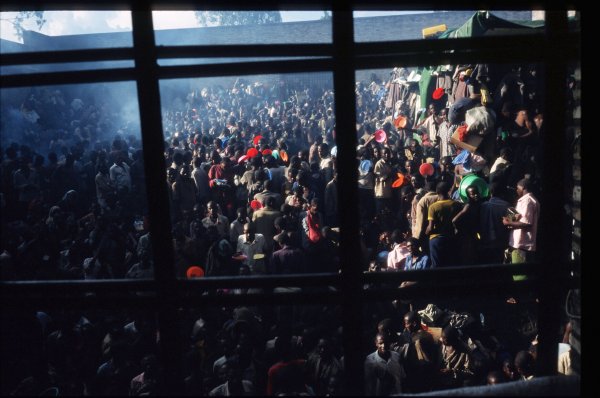 One Survivor's Reminders of the Rwandan Genocide
Next Up: Editor's Pick