The Business of Pot

Beer has its Budweiser. Cigarettes have Marlboro. And now, from Nevada to Massachusetts, pioneers in the legal-marijuana industry are vying to create big-name brands for pot.

When the legalization movement began years ago, its grassroots activists envisioned a nation where mom-and-pop dispensaries would freely sell small amounts of bud to cancer patients and cannabis-loving members of their community. But the markets rolling out now are attracting something different: ambitious, well-financed entrepreneurs who want to maximize profits and satisfy their investors. To do that, they’ll have to grow the pot business by attracting new smokers or getting current users to buy more.

To hear these pot-preneurs talk is to get a better sense of how the legalized future could unfold and just how mainstream they believe their product can become. Says Joe Hodas, chief marketing officer at Dixie Elixirs & Edibles, a Denver maker of pot food products: “I want to get that soccer mom who, instead of polishing off a glass of wine on a Saturday night, goes for a 5-mg [marijuana] mint with less of a hangover, less optics to the kids and the same amount of relaxation.”

Other startups envision nationwide chains where pot in all forms will be sold in well-lit stores with gleaming corporate logos and friendly, well-trained employees.

Considering that marijuana remains prohibited by federal law, these plans might seem premature. But entrepreneurs believe the country is at the tipping point, with medical weed already legalized in some form by 23 states and the District of Columbia. Eager capitalists are already betting that Florida will go next–and they are raising funds and buying real estate to get ready.

With each new state to vote yes, the possibility of federal legalization grows more real. This makes the big questions surrounding pot commercialization urgent for those on every side of the debate. How should advertising be regulated? Should the rules favor homegrown businesses or national corporations? The legal pot market in the U.S. is already a $3 billion opportunity with the possibility of growing to $35 billion, according to some estimates–and capitalism doesn’t leave money on the table. Americans are voting for a change, but are they ready for Big Dope?

From Greek Yogurt to Pot

Adam Bierman is nobody’s idea of a pothead. A 33-year-old former college baseball player, he started a branding company a few years ago that created websites and inviting retail spaces for food businesses like fresh-juice bars and Greek-yogurt joints. One day in 2009, after a call from a prospective client, Bierman showed up at a medical-marijuana dispensary with his briefcase to find an old woman with her hair dyed electric blue. She looked “like one of those troll babies,” recalls his business partner, Andrew Modlin. “I asked her how much she made,” says Bierman. “She said [something like] $300,000–you know, crazy numbers. I was like, ‘No, not what you made last year, what you made last month.’ And she said, ‘That was last month.'” On the way back to their office, Bierman turned to his partner and said, “Why aren’t we doing that?”

Six years later, Bierman and Modlin are the brains behind a company called MedMen. It’s a pot consultancy based in Culver City, Calif., that helps with everything from finding real estate to completing the complex applications required to get a license in a state that allows the use of medical marijuana. If a client gets a license, MedMen will manage the business, much as the Four Seasons manages hotels around the world, in exchange for a slice of the business’s revenue. MedMen will supply the brand and business model and operate the business day to day, doing everything from hiring staff to devising an annual budget. If the plan works, consumers across the country will start to recognize their logo on pot products and on their sleek, drugstore-style storefronts, like the ones the pair created for businesses like Go Greek Yogurt in Beverly Hills, Calif.

It’s far too early to tell if Bierman will succeed. MedMen has yet to open a single store, and federal law prohibits Bierman from shipping products across state lines. As long as marijuana is federally illegal, he faces a patchwork of 24 marijuana markets that are regulated differently. In Massachusetts, for example, businesses must grow the pot they sell, while in Nevada, there are separate licenses to produce, cultivate and sell. That means he and his clients have to build separate, self-contained businesses in every state he enters, and the nature of those businesses will depend on the decisions of dozens of regulators across the country.

Still, experts in the pot world say Bierman isn’t nuts. “Until very recently, this was a highly local industry,” says Chris Walsh, managing editor of Marijuana Business Daily. “All of that is changing. What we’ve really seen this year is that people who run successful retail or medical-marijuana stores are getting involved in new states where it is legalized. The industry is at a point where a national brand is possible.”

On the wall of Bierman’s Culver City office is a map of the states he wants to expand into with the amounts (in millions of dollars) he estimates he must raise to succeed. Bierman’s first major investor was Florida’s N Squared Management, a small investment company co-managed by Fred Portnoy, 58, who has worked primarily in health care. Portnoy discovered MedMen after N Squared decided to apply for a cultivation and dispensing license in Illinois and realized it would need a management company to run the business if it got one. Impressed by Bierman, the firm decided to invest $3 million in MedMen. “I think it’s kind of brilliant,” says Portnoy. “Anyone in my generation who sees an opportunity in pot–they are going to need these people.”

Nevada is central to MedMen’s play for a national brand. Bierman hopes Las Vegas’ 40 million annual visitors, many of whom arrive for vice, will learn about MedMen and look for it in other states. It’s not a bad bet, since Nevada’s 2013 medical-marijuana law allows card carriers from other states to buy it there. And recreational pot is on the ballot for 2016.

MedMen says it is in negotiations to manage two dispensaries in Nevada. Meanwhile, Bierman and Modlin have won and are going forward with several other licenses in Nevada–six for cultivation and two for production. MedMen says those operations will be up and running as early as September, with products on the shelves in the fourth quarter of this year.

The costs of large-scale marijuana production can be high–it’s energy-intensive–and there are plenty of risks and unknowns. Plus, some investors are wary about the reputational risk of getting into the drug business. But others see a giant market still in its embryonic stages. Investors in Nevada, who are accustomed to putting their money in industries like liquor distribution, gambling and strip clubs, are less squeamish.

Experience with casinos has made Nevada banks more comfortable with the inherent risks of banking what is typically an all-cash business. Though the number is growing nationwide, only 105 banks and credit unions out of more than 13,000 will extend banking services to cannabis businesses, according to Marijuana Business Daily. The U.S. Treasury and Justice departments issued guidance in February 2014 on how banks should work with the marijuana industry. The CEO of First Security Bank of Nevada, Jason Awad, tells TIME his bank will operate accounts for marijuana businesses as soon as it can finish the due-diligence process to comply with the regulations, a process that has already been under way for six months.

But even with that Hurdle, 2015 promises to be a big year for the pot business. In addition to the start of commercial sales of medical marijuana in Nevada, pot will also begin to be sold legally in Massachusetts and, barring hiccups, Illinois, with the states of New York and Maryland following close behind in 2016. By the time the next President takes the oath of office, in 2017, marijuana-policy experts expect one-third of the U.S. population to have legal access to recreational cannabis.

While pot advocates hail the progress, some opponents fear that explicit legalization will inevitably bring out the worst in entrepreneurs as they pursue profits. They point out that even Amsterdam, which is notorious for the coffee shops where marijuana is openly sold, has not actually legalized pot; instead, it prohibits large-scale cultivation and wholesale selling, limiting sales to 5 g per person per day, so that pot is available but under a variety of restrictions.

One of the biggest fears among those who oppose legalization is advertising. “The problem we have from a public-health standpoint is that advertising works,” says Steve Pasierb, former president and CEO of Partnership for Drug-Free Kids. “People understand that Joe Camel and the Budweiser frogs affected kids, and we don’t want to see that happen here.”

Unless Washington reverses years of policy and legalizes pot on a national basis–an unlikely step anytime soon–big-time advertising won’t be easy to execute. (For instance, Facebook and Google currently won’t allow marijuana advertisements.) That’s true of other big ambitions too, including prospects for pot IPOs; Nasdaq and the New York Stock Exchange don’t allow firms involved in federally illegal activity to trade on their exchanges.

But for all that, Bierman believes full legalization is inevitable as well as its acceptance in the mainstream. In his dreams, pot will soon take its place in the very pantheon of American culture. He says, “I can see a really cool-looking MedMen commercial on the Super Bowl in 2017.” 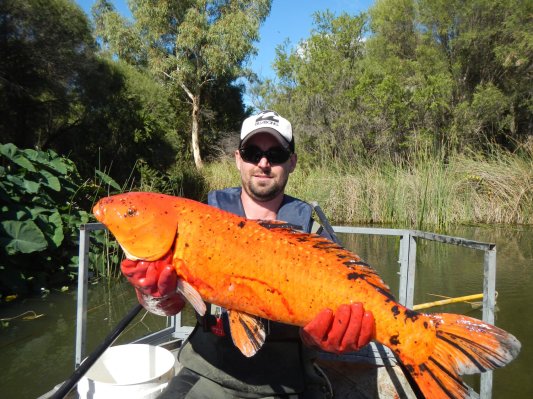 This Pet Fish That Are Turning into Giant Aquatic Killers
Next Up: Editor's Pick