The GOP’s Theory of Evolution

Sometimes stagecraft can tell a story better than a speech. By the time Rand Paul stepped to the podium in a Louisville hotel on April 7 to announce his White House bid, the campaign’s themes had been spelled out by the gender and skin tones of supporters preceding him. The Hispanic state senator. The African-American pastor. The young woman from the University of Kentucky.

Paul’s presidential campaign is rooted in a promise that his libertarian-tinged ideas are the best way to bring new blood into the GOP. As Republicans struggle to adapt to demographic change, the pitch to build a bigger, broader and more inclusive party has helped Paul stand out. But the challenge has proved harder than expected.

Reinventing the Republican Party has required reinventions for Paul as well. The Kentucky Senator’s climb in the polls came as the GOP warmed to the merits of his more restrained foreign policy. But lately the grisly rise of the Islamic State of Iraq and Greater Syria and the Iranian nuclear negotiations have rekindled the party’s hawkish leanings. Paul reacted to the shift by promising to boost the defense budget, calling for air strikes to fight ISIS and emphasizing U.S. ties to Israel. After a brief flirtation with immigration reform, he has adopted tough border policies. In a shift in tone, he now calls same-sex marriage a “moral crisis” that “offends” him.

Such tweaks have positioned Paul to compete for swaths of the party that might once have dismissed him. But coalition building is a balancing act. Attracting new fans may alienate the libertarian base he inherited from his father Ron. A message that appeals to evangelicals in Iowa is apt to flop in the colleges and urban communities where Paul is betting he can build new bridges.

But the strategy has undeniably propelled Paul from a Tea Party curiosity to the forefront of the party. He is running toward the top of early polls, with a stocked bank account and devoted networks in early-primary states. If changing the GOP occasionally requires Paul to change his tune, most supporters are O.K. with that. “Anything that needs to be tweaked or massaged or polished to get from here to there,” says David Adams, his former Senate campaign chairman, “is fair game.” 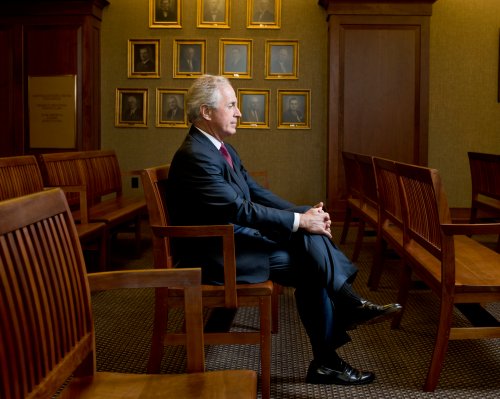 The Relentless Tennessee Dealmaker
Next Up: Editor's Pick