Hong Kong's Umbrella Revolutionaries Are Slowly Coming Back to the Streets

A poster of an umbrella with the words "We'll Be Back" written underneath is pictured on a wall at the main Occupy protest site at Admiralty in Hong Kong on Dec. 11, 2014
Bobby Yip—Reuters
By Rishi Iyengar / Hong Kong

It has been 200 days since tens of thousands of Hong Kongers flooded the city’s streets demanding the right to freely elect their own leader, and 126 days since the police unceremoniously cleared the tent-filled villages after almost three months of occupation.

The movement for democracy has largely been relegated to online forums and abstract discussions, but that isn’t the only place it resides. The handful of tents that remained in front of the Central Government Offices even after the Dec. 16 clearance has steadily grown over the past three months. Currently, 146 fabric shelters line the sidewalks of Tim Mei Avenue, where the use of pepper spray and arrest of student protesters on Sept. 27 was the spark that set the movement ablaze. Some have spilled over onto the sidewalks of Harcourt Road, which the protesters knew as Umbrella Square. Some of the most endearing elements of the camp, like an organic garden and a study corner, have been re-created.

And while the fervor of lore has been replaced with a quiet resignation, the protesters that continue to call the foreground of Hong Kong’s Legislative Council Complex home are determined to make their voices — however small — be heard. “The government right now is doing many shameful things, and we want to let all the Hong Kong people know that we are still here, we will not back off,” says Thomas Hung, 57, a businessman living in the camp.

Hong Kong has been governed under the “one country, two systems” principle since it was handed back to China by the U.K. in 1997, meaning that its citizens enjoy rights like a more open economy and greater freedom of speech than their mainland counterparts. But Beijing’s refusal to allow residents full control over electing the city’s top political post of chief executive by 2017 has caused a resentment that continues to simmer long after the clearance of the streets.

Hung says he and his fellow residents want to “keep the pressure” on the government and ensure the controversial reform handed down last August — effectively allowing the Chinese Communist Party to screen candidates for chief executive — is not passed. (Protesters see this caveat as reneging on an earlier promise; Beijing retorts that this freewheeling metropolis of 7 million already enjoys significant autonomy and lacks patriotism.)

The protesters’ target, says Hung, are the 27 pro-democracy members of the city’s parliamentary body, the Legislative Council, who support the street sit-ins and have vowed to oppose the government’s effort to deny its citizens full voting rights.

“Under that sort of restriction, any election method being created will not be acceptable because it will not give the voters a genuine choice,” Emily Lau, a lawmaker from the Democratic Party and a prominent voice in the opposition, tells TIME. “This time Beijing actually said there should be universal suffrage, and if they propose something that is not and we support it, that means we are aiding and abetting. We can’t do that.”

Nevertheless, pro-government legislator Regina Ip, who represents the New People’s Party, says she is “cautiously optimistic” that the resolution — expected to be put forth within a matter of days — will pass, especially after certain moderate legislators from the democratic camp have advocated an acceptance of the reform as the lesser of two evils. “If the motion doesn’t go through I think many people will be disappointed,” Ip says, adding that “a great majority of the public will want a chance to vote albeit under a limited nomination model.”

Lau insists that the dissenting lawmakers within her party are a minority, although she admitted that she cannot speak for other parties in the pan-democratic camp.

The protesters and pro-democracy lawmakers alike are opposed to the reform even though the only alternative being presented by the government is to retain the current political system, in which a largely unrepresentative 1,200-member election committee would choose the city’s chief executive. It also represents the strong possibility of the city’s extremely unpopular chief executive, Leung Chun-ying, could return for a second five-year term.

Leung also expressed his faith in Hong Kong’s desire to implement political reform and said on Tuesday that he was “confident” that the proposal would be passed in the legislature and supported by the people, according to the South China Morning Post.

“The government is almost using it as a threat,” said Michael Davis, a political commentator and law professor at the University of Hong Kong, of the prospect of Leung’s re-election. “It’s a very interesting way to declare your campaign.”

Underlying these tensions is a distinct chauvinism among Hong Kongers regarding mainland China and its people, which manifested itself in the so-called shopping protests in February and March. The protests involved hundreds of locals gathering at shopping malls near Hong Kong–China border areas, heckling and sometimes physically abusing visitors from the mainland whom they perceived as parallel traders — individuals who come in as tourists and buy essential supplies like baby formula and diapers in bulk to resell in China. The protests were condemned last week by Leung for allegedly causing a sudden dip in mainland-visitor numbers over the usually busy Easter break. According to local media, the chief executive said the protests had “seriously tarnished” Hong Kong’s image as a tourist destination, although he admitted that the government needs to formulate policies to limit parallel trading. Concrete steps to achieve that goal were instated on Monday, with the Chinese government announcing that citizens of neighboring Shenzhen would be forbidden from visiting Hong Kong more than once a week.

“When it comes to political development, [the government] made no effort to respond to the protesters. In this area [of shopping protesters], we do see more efforts to respond,” said Davis. “They may be feeling the heat on this more than they did over democratic development.”

The struggle for democracy, on the other hand, remains trickier to address. The protesters at the camp insist they have no plans to reignite the mass sit-ins. “We have no plan to do Occupy again because it didn’t work,” says Anthony Kwok, a 50-year-old branding professional who helps manage the camp’s well-stocked library. He adds that it is more important for citizens to be educated about what’s at stake so they can use their vote more effectively.

“If the government wants to clear this area it can easily do so, right now the maximum strength is about a hundred people,” Hung says.

But the potential for those hundreds to grow to thousands always exists, depending on what the government does next.

“I think there are a lot of incidents that can potentially trigger public dissatisfaction, and that will become an opportunity for the public to regalvanize,” says Eliza Lee, head of the Department of Politics and Public Administration at the University of Hong Kong. “The sentiments [of the Occupy protesters] were very strong, and I can’t imagine that kind of strong sentiment has extinguished altogether,” Lee adds. “Some kind of large-scale confrontation or contention between the society and the government is very likely to happen within this year.” 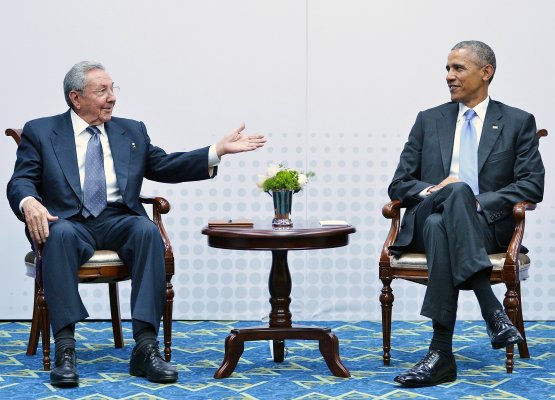 Obama's Cuba Move Sets Up Fight With Congress
Next Up: Editor's Pick