Duke may have beat Wisconsin 68-63 in the NCAA Men’s National Championship on Monday night, but a controversial call that may have aided the Blue Devils in their win is still under speculation.

NCAA Vice President Dan Gavitt told ESPN’s Outside the Lines on Wednesday that game officials did see the same video replay angles that viewers at home saw on their screens, contradicting what John Adams, head of NCAA officials, said Tuesday.

The controversial call came with Duke up by five points and less than two minutes left in the game, when the ball flew out of bounds. Commentators, along with many fans, seemed to think Duke forward Justise Winslow had been the last man to touch the ball. But after officials reviewed replay footage for nearly two minutes, they awarded the ball to Duke, not the Badgers. Duke went on to win the championship.

The next morning, Adams told SiriusXM College Sports that “we never saw on our monitor what everybody saw at home, if you can believe that.” He added: “We had been told time and time again, ‘Nobody at home will see anything you didn’t see.’ And I will tell you that’s not what happened last night. That is not an excuse. That is just laying it out for you.”

But Gavitt said that Adams, who he said is leaving his post, and the other officials had in fact seen the footage that CBS aired that night.

“Unfortunately, John misspoke yesterday,” Gavitt told ESPN. “The officials did indeed have the camera angle that was shown on the CBS broadcast. It was the last angle they did see. They likely did not stay long enough with a review to see that angle magnified. But they made their determination based on the two-minute review and the camera angle that was shown on CBS and with that determined that there wasn’t indisputable evidence to overturn the call. You need to have indisputable evidence by rule to change the call. The facts are they did have the angle the viewers had.” 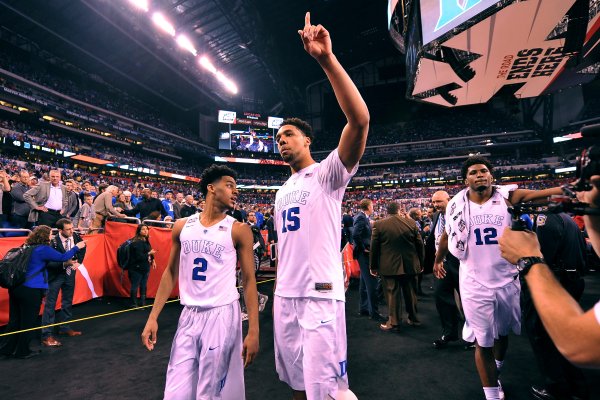 A Wisconsin-Duke Final Is Just Fine
Next Up: Editor's Pick