The Story Behind the Haunting Photo of a Starving Afghan Boy

Gul Ahmad, an infant boy suffering from acute malnutrition, is covered by his mother's scarf while being treated in the therapeutic feeding center ward at the Doctors Without Borders (MSF) administered Boost Hospital in Lashkar Gah, Helmand province, Afghanistan on April 6, 2015.
Andrew Quilty—Oculi
By Olivier Laurent

Andrew Quilty’s photograph is hard to read at first. Under this sea of orange, we can barely distinguish a form: an infant Afghan boy, named Gul Ahmad, who suffers from acute malnutrition.

His mother has covered him with her orange scarf, protecting him from the heat and the dust of the place.

Gul’s story is just one among many. Each month, Doctors Without Borders (MSF) treats 250 malnourished children at its Boost Hospital in the Helmand province; and recent UNICEF research predicts that hundreds of thousands children will suffer from severe malnutrition this year in Afghanistan.

When Quilty, an Australian photographer based in Kabul, visited the hospital, he saw dozens of women attending to their sick children and grandchildren. “In Afghanistan, for a man, photographing women is highly frowned upon and so the moment you enter a ward the mothers and grandmothers will instinctively wrap themselves in their scarves and often face in another direction,” Quilty tells TIME. “As a photographer, you really have to focus on the child individually, and also be patient and wait until the mothers understand that you don’t want them to prop their children up, turn them over or wake them from sleep so you’re able to take the picture they think you want to take.”

When Quilty first noticed Gul, his mother’s first reaction was to take the orange scarf away. “In that sort of case I try to indicate that they don’t have to do anything differently,” he says. “You already feel very disruptive being in the ward as it is, so I suppose you try to do what you can to minimize that disruption.”

Quilty’s eerie image speaks of the dire conditions in a country that has gone through successive conflicts since the late 1980s. “This photograph is certainly one of, if not the only image of my own that I’ve really found hard to look at,” he says. “I suppose it has something to do with the fragility or the innocence of this boy. Perhaps it has something to do with the fact that he appears to be all alone as well as obviously physically vulnerable. I think the orange scarf also has—in an abstract way—the effect of making Gul appear as if he was still in utero—in the most innocent stage of life.”

The photograph also makes Quilty angry, he says, especially after hearing his own Prime Minister speak about the end of the war in Afghanistan meaning hope for a brighter future. “It’s like, we came and left a giant mess but we’re out now so we can wash our hands of it,” Quilty says. “In Helmand, the fighting is only getting worse.”

Andrew Quilty is an Australian photographer based in Kabul, Afghanistan. 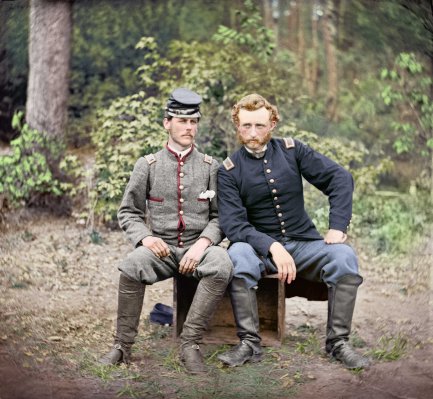 See the American Civil War in Color
Next Up: Editor's Pick