They may have taken a vow of silence, but the Blue Man Group is as excited about the impending return of Game of Thrones as the rest of us. In a new video, the group puts its unique set of musical skills to work and played the Game of Thrones theme song on a collection of pipes, tubes, jars and other well-tuned flotsam. The result is an excellent facsimile of the song composed by Ramin Djawadi for the HBO series.

The Blue Man Group also managed to make a silent plea to bring Hodor back for season 5. Despite a season 4 cliffhanger that left the fate of Hodor and his charge, Bran Stark, in flux, the two characters are not slated to appear on this season of the show, much to the chagrin of some (blue) fans. In the text accompanying their new video, the Blue Men have sworn to continue their silent streak (which is rivaling Teller’s at this point) until Hodor’s status in season 5 is confirmed and used their instruments to dramatically state their case. 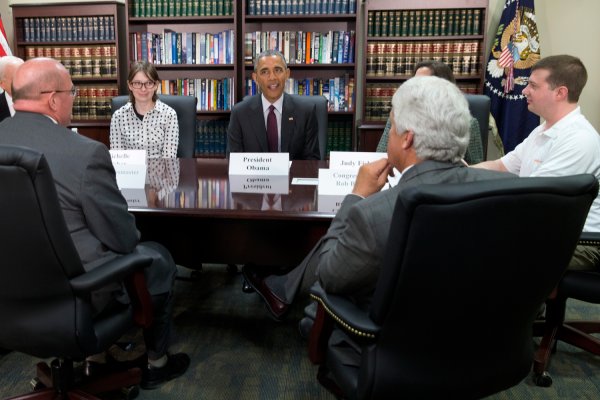 Guy Wears Polo Shirt to Meeting Not Realizing Obama Would Be There
Next Up: Editor's Pick