A vaccine designed from a crippled virus with Ebola genes stitched in—the first tested against the strain that caused the outbreak in West Africa that has killed 10,000 and infected thousands more—protected every monkey tested from being infected with Ebola.

Reporting in the journal Nature, Thomas Geisbert, a virologist from the University of Texas Medical Branch, and his colleagues describe a vaccine made from a virus that commonly infects cows—called vesicular stomatitis virus (VSV)—that’s had some of its genetic material replaced with genes for surface proteins from the Ebola virus. None of the eight monkeys inoculated with the shot showed any signs of severe Ebola infection after being exposed to the virus 28 days later, while both of the control animals died of the disease seven and eight days after infection.

MORE: Ebola Vaccine Is Safe and Effective, According to First Study

The vaccine is the second generation of one that Geisbert and Heinz Feldmann, from the National Institute of Allergy and Infectious Diseases, co-developed in the 2000s. But because the vaccine relies on a live, albeit hampered virus, it raised concerns about safety that killed-virus vaccines, like polio and hepatitis A, don’t have. Neither the VSV nor Ebola virus are capable of replicating, since the VSV has part of its genome cut out and replaced with Ebola material, and the Ebola virus only has its outer surface genes and none of its dividing machinery. But a growing virus, even a slowly growing one, can cause problems. That’s what researchers saw in an early human trial of the first generation VSV Ebola vaccine, which was tested among 40 healthy volunteers in the Washington DC area. Some developed arthritis-like conditions, which added to existing concerns about the vaccine’s safety profile.

“Clearly there was a lot of room for improvement. It’s a balancing act,” says Geisbert. “What makes it such a good vaccine is that it grows. But we are trying to find the balance between efficacy and safety.”

He may have hit upon that parity with the latest version of the shot. By changing where in the VSV genome he inserted the Ebola genes, he found a vector that seems to deliver the same immune response against the Ebola virus, yet at lower cost to the person being vaccinated. The VSV loaded with Ebola grew at a five to 10 times slower rate than it did in the first vaccine, and animals inoculated with the newer vaccine showed 10 to 50-fold lower levels of both VSV and Ebola in their blood compared to animals given the first generation shot.

The slower growing VSV, says Geisbert, “in a well ordered universe is associated with less possibility of an adverse event” from the vaccine.

That won’t be known for sure until the vaccine is tested in the first healthy human volunteers, which may happen as soon as this summer. 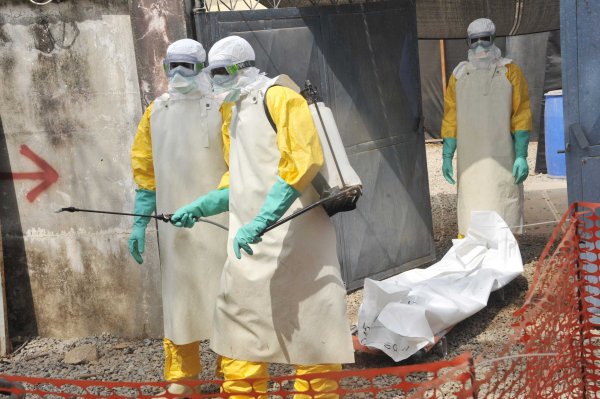 Ebola Cases in West Africa Top 25,000
Next Up: Editor's Pick