Tank Man at 25: Behind the Iconic Tiananmen Square Photo

When Jeff Widener looks at the most important photograph of his career, it makes him think about failure. Like most news photographers, Widener is often worried that he will be absent during a critical moment and miss a critical shot. And like many of the most important photographs in history, Widener’s Tank Man almost didn’t happen. “I don’t have it on my wall,” says Widener, “because every time I look at it, it reminds me how close I came to messing it up.”

In 1989, Widener was a picture editor for the Associated Press in Southeast Asia. As political turmoil and student protests heated up in Beijing that spring and summer, Widener was dispatched to China to cover the melee. Day after day, he would leave the AP bureau inside the U.S. diplomatic compound in Beijing and ride to Tiananmen Square to shoot pictures. At first, the assignment seemed relatively safe and straightforward. “The square was actually very organized. They had street sweepers. They had sort of a security ring all the way to the top, where they had printing presses. There were long lines of people getting food,” says Widener.

But around June 3, Widener’s job became more dangerous as the chaos and violent clashes in Beijing spilled into the streets. In one particularly terrifying encounter, a Chinese man approached Widener and opened his jacket. Inside was a machete dripping with blood. On another occasion, Widener was hit in the head with a rock, shattering his camera, causing a concussion and nearly killing him.

Widener’s leftover headache from the incident was still throbbing on the morning of June 5. His AP bosses in New York wanted someone from the bureau to go to Tiananmen Square, where government troops initiated a major crackdown on protesters the night before. The AP photographers on duty drew straws. Widener got the short one. With film stuffed down his pants and camera equipment hidden in his Levi’s jacket, Widener pedaled off in the direction of the Beijing Hotel, which stood at the edge of the square. After narrowly evading security in the lobby with the help of a sympathetic American exchange student, Widener made his way to a sixth-floor room.

In between sleeping off his headache, he photographed the events outside from the hotel room’s balcony. “There were tanks pushing burnt-out buses. There were people riding around on bicycles,” Widener remembers. “Occasionally, there’d be a little tinkle of a bell, and it would be a guy in a cart with a body or somebody dying, blood everywhere.”

Then suddenly, a column of tanks began rolling by and a man carrying shopping bags walked in front of them. Widener raised his camera and paused, anticipating the perfect moment to snap the shutter. “I waited for the moment that he would get shot, and I waited, and I waited,” says Widener. “And he wasn’t.” Instead, the man waved his arms in front of the lead tank as it tried to proceed around him and eventually, he climbed on top of the hulking metal. While this was happening, Widener realized he was armed with the wrong speed film and too far away to get a good picture. A piece of equipment to improve the shot was on the hotel room bed, several feet away. Should he leave his balcony perch and get it? “It was again a huge gamble, and I’ve always gambled. So I went back to the bed, and I got it,” says Widener.

The result is an iconic picture of defiance in the face of aggression. “I was just relieved that I didn’t mess up,” says Widener, whose photograph appeared on the front pages of newspapers the next day from New York to London and has been known since as one of the greatest news photographs of all time.

“Here’s this guy who is obviously just out shopping, and finally he’s just had enough ” says Widener. “I assume he thinks he’s going to die. But he doesn’t care because for whatever reason—either he’s lost a loved one or he’s just had it with the government, or whatever it is—his statement is more important than his own life.”

Tank man was pulled away by several others on bicycles and has never been identified, but, in a sense, he’s been with Widener for the past 25 years. “If somebody had a way of checking my brain thoughts, this guy probably goes through every single day. Because he’s become a part of me.” 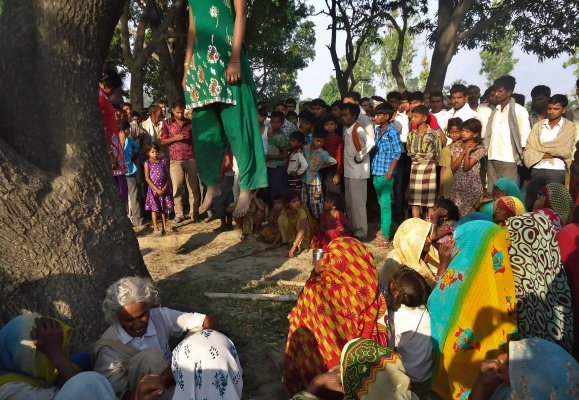 The Story Behind a Shocking Image of India Rape Victims
Next Up: Editor's Pick