DOC NYC 2013: Highlights From the Largest Documentary Festival in the U.S.

As part of its mission to provide more reporting on the moving image, LightBox spotlights a selection of non-fiction film and video from DOC NYC. In four years, DOC NYC has grown into the largest documentary festival in the United States featuring 132 films and events. Here, Jon Dieringer, editor and publisher of Screen Slate, writes for LightBox highlighting 8 documentaries — in no particular order — from the 73 feature-length titles, many having U.S. or world premieres. Not in New York? Don’t fret: Many of these docs will soon be widely available through theatrical engagements and video-on-demand.

Ishiuchi Miyako’s large-scale images of clothing pulled from the collection of the Hiroshima Peace Memorial bring the trauma of the 1945 atomic-bomb attack to vivid life while starkly suggesting the victims’ absence. In 2011, the Museum of Anthropology in Vancouver opened ひろしまHiroshima, a show of Miyako’s work that represents the first-ever major international art exhibit devoted exclusively to Hiroshima. Remembrance, empathy, beauty, and loss are all themes of Miyako’s photographs and of Linda Hoaglund’s documentary — an especially rich inquiry into historical memory and responsibility.

IS THE MAN WHO IS TALL HAPPY?

Michel Gondry’s third feature-length documentary takes the form of an “animated conversation” with one of America’s few long-lived public intellectuals, Noam Chomsky. Their talk veers between candid personal recollection and critical discussion. Like a biographer with a box of crayons, Gondry illustrates their colloquy with free-associative animations, and he isn’t afraid to interject personal anecdotes or points of clarification. The result is a charming, accessible window into Chomsky’s work and character.

THE DARK MATTER OF LOVE

This engaging documentary follows Claudio and Cheryl Diaz and their biological daughter Cami — a self-described “Disney family” — on their journey from suburban Wisconsin to Arkhangelsk, Russia, where they adopt three new family members. Over the course of the next year, we watch as the precocious 11-year-old Masha and mischievous five-year-old twins Marcel and Vadim become Caitlyn, Cole, and Cayden Diaz. Despite the recent political controversies surrounding adoption of Russian children, fourth-time filmmaker Sarah McCarthy’s focus is on developmental psychology and social interactions. In this context, adoption therapists Dr. Robert Marvin and Nicole Milliren become a sort of Greek chorus, periodically commenting on footage of Claudio and Cheryl’s successes and failures.

“If I can blow some people’s minds, I’m doing them a great favor,” says one of the performers in Exposed, and that’s exactly what Beth B’s documentary does. In her latest work, the former No Wave filmmaker profiles eight New York burlesque performers of various (or ambiguous) genders, approaches, and backgrounds. One of the most revealing portraits yet of the marginal performance medium, the film is likely to blow the cobwebs off any preconceptions viewers might have about gender, sexuality, empowerment and the body. While they represent styles ranging from the whimsical maritime-themed work of Bambi the Mermaid to the transgressive provocations of Julie Atlas Muz, the performers’ candid stories suggest a common philosophical principle: that by exposing their own insecurities, they might empower the audience to a positive reckoning with their own. Like its subjects, Beth B’s documentary is uninhibited, playfully unsettling, and uniquely enlightening.

If you’re going to call a movie Death Metal Angola, it had better be hardcore. Jeremy Xido’s documentary surprises out of the gate with its understated, observational character exploring the textures of ruin and decay in war-torn Angolan cities like Luanda, Benguela, and Huambo. Smartly photographed, it explores the heavy music subcultures like death metal, thrash, and grindcore that have sprung up in areas most fraught with violence and civil war while charting one musician’s attempt to organize Angola’s first national rock concert.

For decades, artist Al Carbee has outfitted his home Saco, Maine, with dozens of cameras and hundreds of Barbies to create an idiosyncratic body of plastic glamour portraiture set against baroque backdrops assembled from generic, mass-market art prints. The subject of Jeremy Workman’s Magical Universe isn’t really an established quantity in the world of outsider art, leaving the audience to form its own impressions of the endearing yet enigmatic Carbee.

REVENGE OF THE MEKONS

“How do you have an amateur band as a career?” asks filmmaker and former rock critic Mary Harron in Joe Angio’s Revenge of the Mekons, articulating a core theme of this winding chronicle of the egalitarian leftist rock band, now well into its third decade of continuous existence. The Mekons were post-punk when punk barely existed: formed at the University of Leeds alongside Gang of Four in 1977, their first single, “Never Been in a Riot,” was a cheeky, deconstructionist rejoinder to The Clash’s “White Riot.” In 1985, the band hit its creative stride with “Fear and Whiskey,” now credited with inventing alt-country. Angio’s polished documentary, featuring interview subjects ranging from Luc Sante to Vito Acconci, illustrates that the literary, free-spirited, rustic rock the band continues to play today is as vital and “punk” as anything it’s ever done.

In the history of commercial aviation, there have been 14 “sole survivors” of major plane crashes with otherwise total fatality rates. Ky Dickens introduces us to four of them: George Lamson, who since 1985 and age 17 has struggled with a life of squandered potential; Jim Polehinke, a co-pilot who faces accusations of culpability and contentious legal proceedings; Cecelia Cichan, who speaks publicly for the first time since surviving one of the deadliest aviation disasters in history at age four; and Bahia Bakari, a French schoolgirl who clung to airplane wreckage while adrift in the Indian Ocean for nine hours in 2009. Dickens creates a penetrating analysis of trauma, guilt, fate, resilience and, ultimately, kinship among survivors.

Jon Dieringer is a filmmaker, independent curator and the editor and publisher of Screen Slate, a daily online resource for listings and commentary of New York City repertory film and independent media. 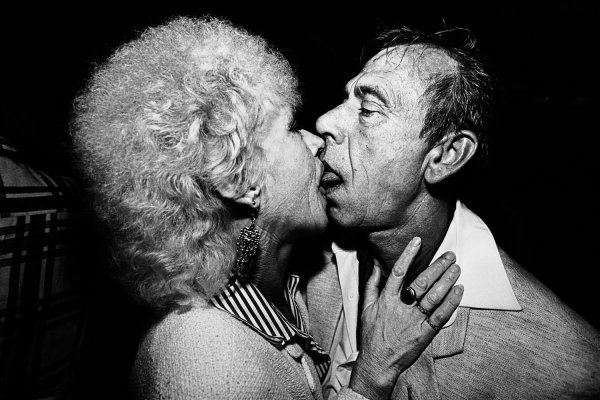 Stark Close-ups on Europe's Late-Night Regulars
Next Up: Editor's Pick