I really wasn’t sure what to expect this year of Frieze, one of the world’s leading contemporary art fairs, which takes place every October in Regents Park, London. At its inception ten years ago, the fair was a vibrant, colorful event, with lots of artists milling around – both emerging and established – as well as curators, gallery owners, collectors and art lovers. But over the years, the ticket price has increased to the point where some artists now feel reluctant to pay the entrance fee for something that, as one journalist put it, “is basically an art supermarket.”

Upon entering the temporary structure built by architects Carmody Groarke, and walking into the first of many gallery booths, I realized that, if this is a supermarket, it’s a high-end model.

In fact, I was so impressed by most of the art on display that I made a call to a reluctant artist friend and said, “Even if it means you’re eating nothing but beans tomorrow, come have a look.” After three days of full immersion, I attempted to select my eight favorite photographs. In no particular order, they are:

There is poetry in the frailty of this object, as if one gust of wind could shatter the book into a galaxy of crystal splinters. According to the gallerist, Tacita Dean immersed J.G. Ballard’s 1960 story “The Voices of Time” in a stream, on a salt plane in Utah, for several weeks to get this effect. The artist then used photography to document the outcome of her experiment, as the book was too fragile to move. To me, the book appears like a physical manifestation of the death of the printed page, made all the more apparent by gallery owners preferring to show artists’ work on iPads rather than with the help of a catalogue raisonné.

When Tom Monaghan took over the Ann Arbor eatery (known then as DomiNick's) in 1960, he pioneered the delivery and takeout-only concept, revolutionizing meals on the go—the chain would later also be the first to use thermal delivery bags to keep the pies hot in transit. By making dinner just a phone call away, pizza delivery helped change the way Americans eat, leading all the way to digital-age no-effort equivalents like Seamless and GrubHub.
Tacita Dean— Courtesy Frith Street Gallery, London

“What exactly is going on here?” I wondered as I stood in front of the large-scale Thomas Ruff photographs. I have to say, even after the kind gallery assistant explained Ruff’s working practice to me for this series, I remained slightly confused as to how exactly a virtual darkroom was used to create this photographic magic. Nevertheless, it left me entranced.

After lots of conceptual art, it’s quite refreshing to stand staring straight into a man’s crotch. Greying sports socks on train-seat fabric has never been the most arousing of combinations but Tillmans certainly tickled my feathers with Karl Marseille II.

The first fast-food pizza place, Shakey’s opened its doors in Sacramento, Calif. in 1954, paving the way for joints like Pizza Hut in 1958, Little Caesar’s in 1959, and Domino’s in 1960. Quick and easy spots like these helped bring pizza from an ethnic specialty to a mainstay of American eating. The company remains in business, but it now has more locations in Asia than in the U.S.
Wolfgang Tillmans—Courtesy of Galeria Juana de Aizpuru, Madrid

I admit I knew nothing about the Japanese artist Enokura before seeing this photograph, but it stopped me in my tracks. The graphic elements of the image — the criss-crossing lines of the square paving stones, the vertical lines of the wall and the darker and lighter elements of the photograph — really enticed me, as well as the fact that it left me wondering, How is this lump airborne just so?

A 14-year-old girl has been charged with murder for shooting another teen girl in Chicago in a confrontation that allegedly began with a dispute over a boy on Facebook. The unnamed suspect was charged as a juvenile Tuesday in the fatal shooting of Endia Martin, the ABC 7 reports. Police say two others, including the suspect's 24-year-old uncle, have are being held in connection with the killing. Police say Martin, 14, was walking home from Tilden Career Academy Monday to her home on Chicago’s South Side when an argument broke out with a group of teens on the sidewalk. Martin was shot in the back at around 4:30 p.m. and taken to hospital, where she died. Another girl was hospitalized after getting shot in the arm but is expected to recover. Chicago Police Superintendent Garry McCarthy told reporters Tuesday that the incident "was a fistfight that turned to a murder with the introduction of a firearm." Martin’s stepfather Kent Kennedy said the argument began as a Facebook feud, according to the Chicago Tribune, and says the family wants justice for what happened. "This is not going to go away. . .We are not going to rest until [the people responsible] are prosecuted to the fullest.” Kennedy also expressed remorse for what he called "senseless" violence in Chicago. "Kids are dying so young nowadays...No place in Chicago is safe for teenagers nowadays." Over 50 children aged 16 or younger have been shot in Chicago so far this year, according to the Tribune. [ABC 7]
Koji Enokura—Courtesy of Taka Ishii Gallery

Andy Serkis Best known for his role as Gollum in the Lord of the Rings trilogy, Serkis was most recently the Second unit director in the Hobbit trilogy.
Raphael Hefti—Courtesy of Ancient and Modern

According to the gallery, the photograph is a reconsideration of earlier source material from Collier’s archive. Its life-size print is alluring, drawing the viewer into the scene. The silvery sea looks like mercury or even mountain snow, adding a sense of mystery and suspense to the image. Will I drown if I follow her in?

Adam Driver The Girls actor was reported by Variety back in February to have been cast to play the villain in Episode VII.
Anne Collier—Courtesy of Marc Foxx Gallery, Los Angeles

Tucked away in the far end of one of Frieze’s long aisles was the Wilkinson Gallery. Having assessed the contents of countless booths, I felt by this stage that Shimabuku had not only created a gift for the monkeys with this image, but a gift for me, too.

Oscar Isaac Born in Guatemala and a graduate of the Juilliard School, Isaac played Prince John in the 2010 film Robin Hood.
Shimabuku—Courtesy of Wilkinson Gallery

This is a collection of exceptional black and white images from the Hashem El Madani Archive. Hashem El Madani was a photographer working in Saida, Lebanon, between the late 1940s and ’70s. His archive is maintained by the Arab Image Foundation, of which the artist Akram Zaatari is a founding member. In these images we see men, young and old, crossing Ain El Helweh Bridge in their suits, on bikes, laughing, chatting, some walking leisurely, others in a rush. The bridge and its characters have come alive all over again, thanks to Zaatari’s fabulous archival work.

Max von Sydow The veteran Swedish actor has played countless roles over the years including that of Ming the Merciless in the 1980 rendition of Flash Gordon and the voice of Vigo the Carpathian in Ghostbusters II
Akram Zaatari—Courtesy of Gallery Sfeir-Semler, Beirut-Hamburg

Anne-Celine Jaeger is the author of Image Makers, Image Takers, published by Thames & Hudson. She previously wrote for LightBox about Jean-François Leroy. 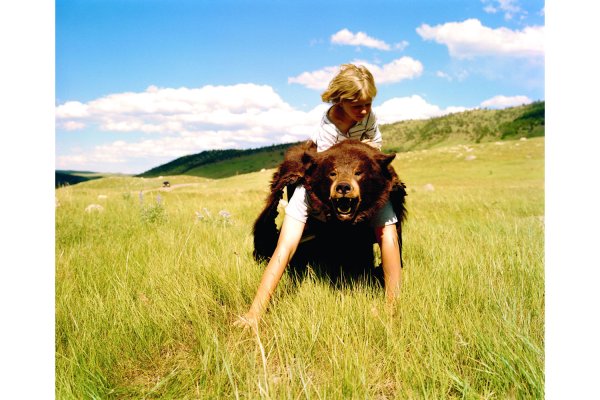