Cy Brown (top) and his hunting partner James Palmer use a homemade drone to hunt wild boar in a rice field. The drone’s name? The “Dehogaflier.”
Gregg Segal for TIME
By TIME Photo Department

We’re used to seeing drones over other countries: silent, sinister, alien presences, looking down from on high, seeing everything and sometimes dispensing violent judgement in the form of a Hellfire missile. We’re not as accustomed to seeing drones over the United States, but we’re going to have to get used to it. They’re coming.

Almost a year ago President Obama formally instructed the Federal Aviation Administration to begin the process of integrating drones into our domestic airspace. Hobbyists have been flying them for years now, but soon Hollywood will be using them to film movies. Police will use them to search for suspects. Farmers will use them to survey crops. Builders will use them on construction sites. Energy companies will use them to monitor pipelines and power lines. The applications are endless.

But the ramifications aren’t simple. What happens when you take this technology, which has been so controversial in the military world, and bring it home? America’s drone campaign has been successful in bringing down al-Qaeda and Taliban leaders, but it has also led the country into a labyrinth of legal and ethical confusion. Can we kill terrorists in countries with which we’re not at war? How much collateral damage is too much?

And that’s just the government: drones are getting cheaper and easier to use all the time, and the time is coming when our friends and neighbors will have access to extremely powerful surveillance equipment. How will we keep our private lives private then? And there are more disturbing scenarios: the U.S. has set some risky precedents, in terms of its practice of sending drones into other countries to kill people it suspects of being militants, without publicly stating its legal grounds. What’s to stop other countries, or even groups or individuals, from doing the same to us?

Drones are disruptive technology that have transformed the battlespace. They’ll transform our domestic airspace, too, in ways that we can’t yet predict. But Gregg Segal’s portraits of everyday drones in America give us a sneak peek.

Gregg Segal is a photographer based in California. LightBox has previously featured Segal’s photographs of Civil War re-enactors, the founding fathers of video games, and Paul Ryan. 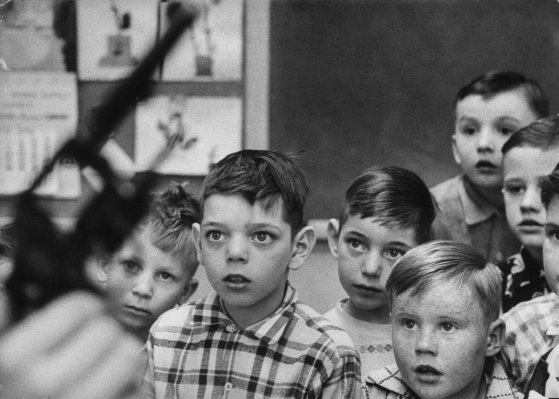 Portraits of Schoolkids Learning Firearm Safety in Rural Indiana, 1956
Next Up: Editor's Pick