Canadian photographer and filmmaker Devin Tepleski was working on an archaeology dig in Ghana when he was asked by villagers, 2,700 of whom would soon to be displaced by the Bui Hydroelectric Dam, to tell their story, which they felt was being ignored by the government and media. The result is a surreal series of portraits of men, women and children standing knee-deep in the Black Volta river taken in 2009, before the river was dammed to flood a 440-square-kilometer gorge.

A student in his last year of a degree in visual anthropology—think Margaret Mead’s films—at the University of Victoria, Tepleski was drawn to photography after seeing Masahisa Fukase’s Solitude of Ravens. Tepleski initially struggled to find a way to combine the two passions. “Anthropology has an appalling history when it comes to representing people from far away places,” says Tepleski. “And anyone working in photography would be keenly aware of the representational issues that have plagued that form as well.” But Tepleski realized as an anthropologist he had the potential, unlike photojournalists, to make a long term commitment to a community, and take a more collaborative approach.

Portraying something as emotionally distant as disenfranchisement, however, presented problems. “There was no action,” says Tepleski. “There was in fact an absence that needed to be photographed—the silence of their voices and the removal of an environment that they were linked to for centuries.” Tepleski hit upon using the sacred river—a spiritually significant place, dotted with shrines, and their main source of water—as surreal back drop for portraits of the villagers. “While I was living with the community, I came to see the river as a character in their lives,” says Tepleski. “They had built a relationship with this place. And it was about to be broken. I wanted to remove the environment from the subjects, and the subjects from the environment.”

Positioning the villagers—over a 100 showed up instead of the expected dozen—in the river. The photographer shot them with the sun coming from behind their left shoulder to get the light bouncing off the murky water, giving him a two hour window each morning to work. “I stood slightly above the river bank that I lined with white satin” explains Tepleski, who ran out of film the first day of the three day shoot. “And I exposed for the subjects skin tones.” The subjects are properly exposed, while the river becomes an over-exposed void. “The river is still present,” says Tepleski. “But only as a reflection or memory.”

With the villagers now relocated, Tepleski is returning to visit their new home this summer. Working on a non-profit, the Friends of Bui, dedicated to finding ways for the villagers to supplement their income with crafts like soapmaking, Tepleski is also trying to help the villagers with their wish for computers and internet access.

More of Tepleski’s work, including videos and essays, can be accessed here. He is represented by the Luz Gallery, Victoria, BC Canada and the Bonni Benrubi Gallery in New York City.

Tepleski also recorded music in Bui, downloads and CDs are available here. All profits from print and music sales go to the Friends of Bui society. So far $5,000 has been raised.

If you’re interested in the field of visual anthropology, Tepleski recommends you also look at the work of Jean Rouch. 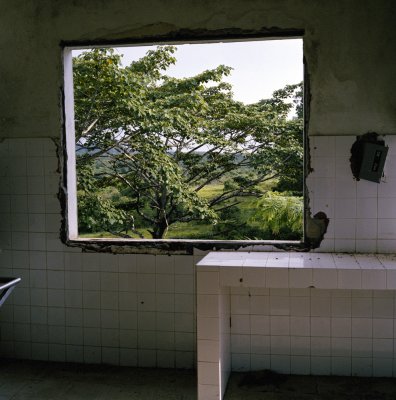 Testimony from a Colleague: Looking Back at Tim Hetherington's Liberia
Next Up: Editor's Pick