What Hillary Clinton Did Before Her Campaign

In February 2013, Hillary Clinton became a private citizen for the first time in two decades. The former First Lady, U.S. Senator and Secretary of State said she was retiring from public view to spend more time at home with Bill to “watch stupid movies” and “laugh at our dogs.” But her foray into private life was brief, and it wouldn’t be long before Clinton returned to politics with the grandest of goals: to become president.

Today, as she launches her second campaign for the White House, Clinton has definitively re-entered public life. But her time off was far from a vacation. Instead, Clinton was busy honing her stump speech, developing a campaign platform and carefully laying the groundwork for a massive campaign operation.

Here are some of the things Clinton did during the last two years.

She distanced herself from President Obama

One of Clinton’s greatest difficulties as a former Secretary of State in the Obama administration will be to differentiate herself from the current president, even as she expresses support for some of his policies. In an interview last year with The Atlantic, Clinton did just that: The president, she said, didn’t do enough to assist Syrian rebels early in the bloody conflict. “The failure to help build up a credible fighting force of the people who were the originators of the protests against Assad,” Clinton said at the time, “left a big vacuum, which the jihadists have now filled.”

Support for gay marriage is now a central part of the Democratic platform, and the candidate who wins the nomination will have to have same-sex marriage credentials. Clinton announced her support for gay marriage in a six-minute video released in March 2013. “LGBT Americans are our colleagues, our teachers, our soldiers, our friends, our loved ones,” telling viewers that she supported marriage equality “personally, and as a matter of policy and law.”

Some questioned her tardiness, though: Clinton’s proclamation came nearly a year after President Obama’s, and by 2013, support of gay marriage was a mainstream view. In a testy interview on NPR, interviewer Terry Gross pushed her on whether her views on gay marriage had evolved, or Clinton had concealed her true views for political reasons. “You are playing with my words,” Clinton said. “I did not grow up even imagining gay marriage and I don’t think you did either.” As Secretary of State, however, Clinton would have been breaking a longstanding tradition of keeping mum on domestic policy if she had voiced support of gay marriage.

She offered qualified praise for Obamacare

The Affordable Care Act has been a net gain for Americans, Clinton said in a February 2014 speech, but there should be concern with how the program is affecting small-business owners. She emphatically said Obamacare should not be repealed. “Part of the challenge is to clear away all the smoke and try to figure out what is working and what isn’t,” Clinton said. “What do we need to do to try to fix this? Because it would be a great tragedy, in my opinion, to take away what has now been provided.”

She gave a lot of speeches

Clinton plunged into the lucrative paid speaking circuit in the months after she left office, getting paid upwards of $200,000 from Goldman Sachs, the Carlyle Group, the University of Buffalo and others for a total of millions in fees. She perfected her personal anecdotes, connected with audiences who could support her coming campaign and workshopped her new campaign ideas.

As a speaker, “you get to plug into the local political scene and you speak in front of large audiences,” says Tad Devine, a Democratic strategist and senior adviser in John Kerry’s 2004 and Al Gore’s 2000 campaigns. “It keeps you sharp.”

She became a grandmother

Clinton plans to share more of her personal life in this campaign. In September, her daughter Chelsea had a daughter of her own, Charlotte. Clinton has often referred to her granddaughter in speeches since her birth, telling audiences that for her, the fight for economic equality for women is personal. “Not just my granddaughter, who’s going to get all the time, attention, love nurturing that she can possibly absorb,” Clinton said at an event in March, “But I want every child to have the same opportunity.”

She prepared for a national campaign

A solid coalition of old and new Clinton allies had begun to gather around Hillary by the end of 2014, most of the top positions in her campaign had been filled by March. Robby Mook, a veteran of Terry McAuliffe’s successful gubernatorial race in Virginia, was poised to take the role of campaign manager, and Clinton tapped former Obama pollster Joel Benenson. She gave her last paid speaking event at the end of March, and her advisors took a preliminary Iowa tour in early April.

The brouhaha over Clinton’s use of a personal email account during her time as Secretary of State knocked her emerging campaign off balance, and her subsequent March press conference at the United Nations didn’t go as smoothly as her team would have liked. But Clinton got some valuable experience taking questions from a skeptical crowd of reporters. The email debate is far from over—as are other questions about donations to the Clinton Foundation—but in some ways, it’s better for her that the issue arose before her campaign begins.

A presidential campaign is grueling, exhausting work. Candidates get very little time to sleep and spend time with their families, much less go on vacation for a few days. After her whirlwind tenure as Secretary of State, Clinton took some downtime to hangout with her husband and her dogs.

Read Next: Hillary Clinton’s Main Obstacle: Her Own Inevitability 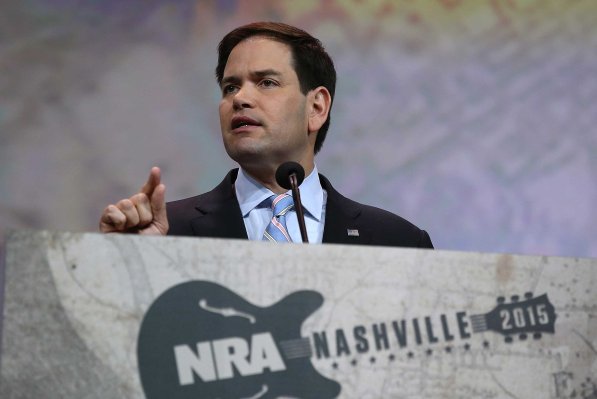