TIME LightBox showcases the world’s best photojournalism and provides a window into the process of how great photographs are made.

Kira Pollack is the Director of Photography and Visual Enterprise at TIME. In October 2011, she was named the photo editor of the year at the Lucie Awards. Since Pollack joined TIME in October 2009, the brand’s photography has been recognized with many prestigious awards including the World Press photo of the Year, and the Visa D’Or award at Visa Pour l’Image. Pollack spearheaded TIME’s Beyond 9/11 project, which was awarded an Emmy in October of 2012. In March 2011, she established TIME’s photography site LightBox, and in August, 2013, she established TIME’s new documentary film unit, Red Border Films. Previously, Pollack was the Deputy photo editor at The New York Times Magazine.

Paul Moakley has been the Deputy Director of Photography and Visual Enterprise of TIME since 2010. He covers national news and special projects such as Person of the Year and the LightBox photo blog. Previously he was senior photo editor at Newsweek and photo editor of PDN (Photo District News). Moakley is an adjunct professor at the School of Visual Arts in New York City as well as a photographer and filmmaker. He lives at the Alice Austen House Museum, home of one of America’s earliest photographers, as caretaker and curator of the museum.

Alice Gabriner is the International Photo Editor at TIME, a position she also held from 2003-2009. Prior to rejoining TIME in 2014, Gabriner was a Senior Photo Editor at National Geographic magazine, and before that, she was the Deputy Director of Photography in Barack Obama’s White House. During her ten-year tenure at TIME, she oversaw the magazine’s award-winning coverage of the Iraq War, and she worked with TIME’s notable team of photographers during the Presidential election of 2000. Gabriner has also curated photography exhibits around the world, and she has been a member of numerous photo juries and portfolio reviews.

Marysa Greenawalt joined TIME in 2013 as our Photo Assistant where she aids the TIME photo staff with production on the magazine and contributes to LightBox. Previously, Greenawalt worked in the photo departments at Hearst Digital Media and Teen Vogue. She holds a Bachelor of Journalism from the Missouri School of Journalism.

Olivier Laurent joined TIME as Editor of LightBox, the magazine’s photography website, in May 2014. Previously, Laurent was the Associate Editor for British Journal of Photography, the world’s longest running photography magazine established in 1854, and the Editor of FLTR, a weekly magazine on smartphone and connected photography he founded in 2013. Laurent has sat on the juries of World Press Photo’s Joop Swart Masterclass, the Carmignac Gestion Photojournalism Prize, the Getty Images Grants for Editorial and the Visa d’Or News and Features among many others. He is a graduate of the American University of Paris.

Myles Little has been an Associate Photo Editor at TIME since 2011. He produced TIME’s “Ideas” issue and the cover of “The Cult of Apple in China” for TIME International, which won the SPD Silver Medal for Cover Illustration 2013. In addition, he curates photography exhibits and has lectured on photography here and abroad. He previously edited photos at Bloomberg Businessweek, TIME.com and Conde Nast Portfolio.com.

Natalie Matutschovsky joined TIME in 2010 as Associate Photo Editor. In addition to contributing to weekly features and special packages like the TIME 100 and an annual roundup of great-performances portraits, she edits for the Culture section. Matutschovsky was formerly at the New Yorker, where she curated images for the fiction section. Before moving to New York City in 2006, she headed up photography at the Walrus, a magazine based in her hometown, Toronto.

Michelle Molloy joined TIME International as a Senior Photo Editor in 2013. She came to TIME from Newsweek, where she was a Senior Photo Editor and, during a transitional period, acting Director of Photography. There she contributed to award-winning coverage of three presidential elections, Hurricane Katrina and productions of Oscar/Emmy roundtables.

Liz Ronk joined TIME in 2012 and is the photo editor for LIFE and TIME History. She holds an MFA in Visual Studies from the Visual Studies Workshop and a BFA from Tisch School of the Arts at NYU in Photography. Along with her work as a photo editor and curator, she is a photographer/artist with work exhibited and published internationally.

Marisa Schwartz-Taylor joined TIME in October 2013 and became an Associate Photo Editor for the website in April 2014. Previously, she spent several years working in the media industry in Ghana and co-founded Loud Silence Media, a documentary production house based in Accra. She studied at Parsons School of Design in New York City and, in addition to her position at TIME, is a multimedia journalist.

Mikko Takkunen joined TIME.com in 2013 as an associate photo editor. Originally from Finland, Takkunen has been living in the U.K. for ten years. Before joining TIME, he spent two years working as a freelance photographer in London for various international newspapers, such as The Wall Street Journal and the New York Times. In 2007, Takkunen started the Photojournalism Links website, which is now part of LightBox.

Marie Tobias, whose career spans over 15 years at TIME, is an associate photo editor. During her tenure, she has worked primarily as photo editor of the magazine’s Arts section. Tobias has won awards from American Photography, Communication Arts and POYi.

Mia Tramz joined TIME.com as an Associate Photo Editor in April 2013. As Multimedia Editor, she pivots between photography, video and interactive media. Previously she spent two years as the Assistant Director of an e-commerce start up that specialized in selling affordable art and photography. She has also held internships at Magnum Photos and Vanity Fair. She is a graduate of Columbia University.

Jonathan Woods joined TIME.com as photo editor in March 2012. Previously, Woods spent three years with msnbc.com as a multimedia producer and six as a photojournalist for newspapers ranging from the Gazette in Cedar Rapids, Iowa, to the Rocky Mountain News in Denver. Woods oversees the photographic vision of TIME.com and the team of picture editors who contribute to it. 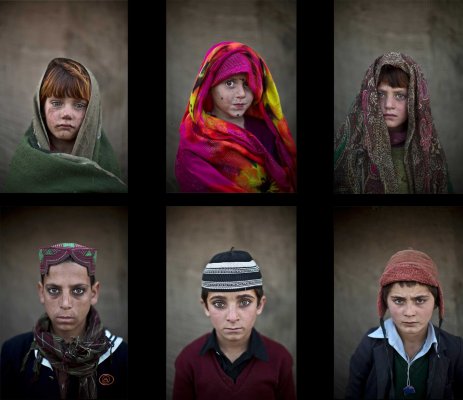 Ways of Seeing: Portrait Series
Next Up: Editor's Pick