The United States Postal Service will honor late poet and author Maya Angelou with a “forever” stamp on Tuesday during a star-studded event in Washington. But a Washington Post columnist is raising questions about the true origin of the quote featured on her stamp.

“A bird doesn’t sing because it has an answer, it sings because it has a song,” the stamp reads. That quote doesn’t come from her celebrated 1969 autobiography, “I Know Why the Caged Bird Sings”, but a 2013 blog interview with Angelou does quote her using the phrase. President Obama even attributed the quote to Angelou at a ceremony for the 2013 National Medal of Arts and National Humanities.

But the Washington Post’s Lonnae O’Neal says the quote may have first appeared in the 1967 book “A Cup of Sun” by Joan Walsh Auglund. The question was first raised by former Washington Post book editor who was skeptical of the quote when he first saw the stamp. He searched in his notebook for a potential source. “I knew I had that quote . . . and there it was. It said Joan Walsh Anglund,” Jabari Asim told O’Neal.

“Beyond deeper questions of when Angelou first said or wrote the quote are the questions of how it comes to appear on a government-issued stamp — one called “forever,” no less,” O’Neal writes.

The U.S. Postal Service, however, is sticking by the phrase. “There are numerous references in books, magazines, blogs and on the internet crediting Angelou with having said it as well,” a USPS spokesperson told the Washington Post. “The Postal Service used her widely recognized quote to help build an immediate connection between her image and her 1969 nationally recognized autobiography, ‘I Know Why the Caged Bird Sings.’ ” 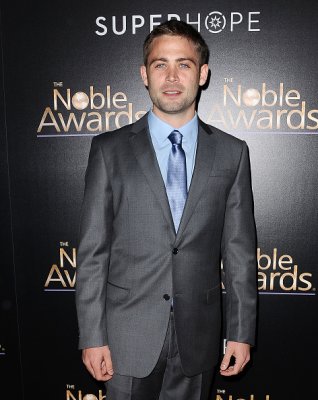 Paul Walker's Brother: 'Paul Would be Proud' of Furious 7
Next Up: Editor's Pick