Duke overcame a nine-point second-half deficit and foul trouble to its two biggest stars to win the fifth national championship in school history, beating Wisconsin 68-63 on Monday night in Indianapolis.

The Badgers took a 58-56 lead with 4:25 to go on a Sam Dekker layup, but the Blue Devils responded with a 10-0 run, capped by a Tyus Jones three-pointer, for a 66-58 lead with 1:24 remaining. A three by Frank Kaminsky and a dunk by Nigel Hayes pulled Wisconsin within 66-63, but Jones hit two free throws to restore a five-point lead and Wisconsin missed a pair of three-pointers on its final trip down court.

Kaminsky, the national player of the year, had 21 points and 11 rebounds for the Badgers while his All-America counterpart for the Blue Devils, Jahlil Okafor, was limited to 10 points and three rebounds while sitting for much of the second half with four fouls. Duke’s Justise Winslow also had four fouls but finished with 11 points and eight rebounds.

Wisconsin opened up a nine-point lead at 48-39 with 13:23 remaining, but freshman guard Grayson Allen led the Blue Devils back by responding with a three-pointer and a three-point play on Duke’s next two possessions to cut the deficit to three.

The Blue Devils were within 52-51 when Okafor came back in the game with three fouls, but he missed a jumper in the lane that would have put Duke in front. On the other end, Kaminsky spun past Okafor, who drew his fourth foul. Kaminsky completed a three-point play that put Wisconsin back up by four at the 9:18 mark.

The Blue Devils wouldn’t go away though, tying the game at 54 on a jumper by Jones with 6:58 to go and going in front on a layup by Allen at 56-54 less than a minute later. Jones and Allen carried Duke in the second half while Okafor and Winslow were in foul trouble. Jones finished with 19 points and was named the Most Outstanding Player of the Final Four while Allen, who averaged just 4.0 points per game, had 16.

​The game was tied at 31 after a first half that featured 13 lead changes.

It was the fifth championship in nine trips to the title game for Duke coach Mike Krzyzewski. Wisconsin was playing in its first championship game since winning the title in 1941, the third year of the NCAA tournament’s existence. 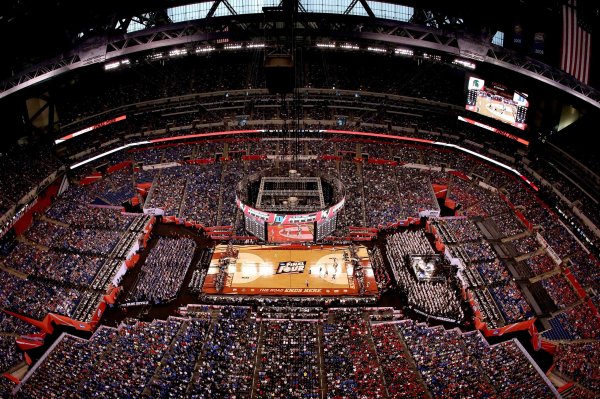 Wisconsin and Duke Get Ready to Dance
Next Up: Editor's Pick