A picture taken on June 27, 2009, shows an lndonesian Facebook patron looking at her page at an internet shop in Jakarta
ROMEO GACAD—AFP/Getty Images
By Yenni Kwok

Last year, a 26-year-old Indonesian law student, angry with her experience at a petrol station in her university town, Yogyakarta (or Yogya), wrote this on the social-media site Path: “Yogya is poor, stupid and uncultured. Friends in Jakarta and Bandung, please don’t stay in Yogya.”

A few years before that, in the Indonesian city of Bandung, a mother of three had a private chat with a friend on Facebook, confiding about her then husband’s alleged domestic violence.

Those two women were later taken to court.

The student, Florence Sihombing, was found guilty on April 1 by the Yogyakarta District Court of defaming the city of Yogyakarta and given a two-month jail sentence, a $770 fine, and six months’ probation — even though she had apologized profusely to the Sultan and citizens of Yogyakarta. The mother, Wisni Yetty, 47, was found guilty of defaming her ex-husband by the Bandung District Court on the same day and given five months in prison and ordered to pay a $7,700 fine. The judge overlooked the fact that her husband had hacked into her Facebook account.

What’s even more shocking is that there is nothing exceptional about these cases or the punishments given. Scores of Indonesian netizens are landing themselves in legal trouble because of what they say online. It belies the image of Indonesia as the world’s third biggest democracy, whose citizens are not only prolific users of social media but also enjoy greater Internet freedom, especially compared with their Southeast Asian neighbors.

Communicating across social networks is everything in Indonesia. The country is the world’s biggest market for Path, fourth largest for Facebook and fifth for Twitter. It is also a huge market for messaging apps, from WhatsApp to BlackBerry Messenger.

The appetite for online discussion and debate, meanwhile, is ferocious. Long before tech venture capitalist Marc Andreessen made popular a Twitter genre known as tweetstorm, Indonesia’s Twittersphere already had kultwit, or Twitter lectures, on everything from religious doctrine to political gossip. A tweet on then presidential candidate (now President) Joko Widodo became the world’s No. 2 most recirculated tweet last year, second only to the star-studded Oscar selfie.

The Indonesian constitution guarantees freedom of expression. However, as the cases of Sihombing and Wisni attest, anyone can be punished harshly under the draconian Electronic Information and Transaction (ITE) Law for a throwaway remark online. Since the Indonesian parliament passed the legislation in 2008, more than 70 people have been reported to police, arrested, taken to court and even jailed. Last year alone, there were 44 cases prosecuted under the ITE Law, according to Southeast Asia Freedom of Expression Network.

Among the targets were ordinary citizens who wrote thoroughly mundane things. There was a housewife who criticized the management staff of the company where her husband once worked. A patient who complained about the service she got at a private hospital. A blogger who engaged in a Twitter war with a former lawmaker that ended in a suspended jail sentence for the blogger. An anticorruption activist accused of defaming a politician on BlackBerry Messenger, who spent 100 days in prison before he was freed by a court in South Sulawesi province. And a civil servant who faced trial because he criticized a local district head on the Line messaging app.

Critics dub the ITE legislation “rubber law” because its ambiguous wording makes it open to broad interpretation, and they warn it could be used to muzzle journalists and activists

Cases of supposed defamation — like Sihombing’s and Wisni’s — are prosecuted under Article 27 of the law. Abdullah Alamudi, senior lecturer at Dr. Soetomo Press Institute who was a member of Indonesia’s Press Council from 2007 to 2010, calls it the “ghost article” because its inclusion took many people by surprise. “That particular article was practically inserted at the eleventh hour,” he says. “Not a single member of the Press Council then, including myself, knew about it until the next day, after the bill was passed into law.”

In response to mounting criticism, Minister of Communication and Informatics Rudiantara promises that a revision of the law is on the parliament’s agenda this year. But Alamudi is skeptical.

“People in parliament like Article 27 because it makes journalists and members of the public cautious about criticizing them,” he tells TIME, calling for the the legislation to be reviewed instead by the Constitutional Court, and pointing out that many of the cases being prosecuted are over matters of opinion.

“If people can’t express their opinion,” Alamudi says, “one day they won’t be allowed to think.” 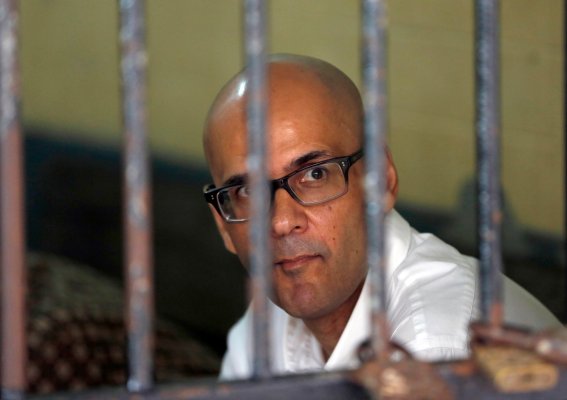