Dancing With the Stars Watch: Memorable Years Mean Many Tears

Welcome to Dancing With the Stars annual tear fest, where the stars perform interpretative dances to their most traumatizing memories. Each year the stars seem to try and outdo themselves as they recount their most memorable years and wait for Carrie Ann Inaba to tear up at the judges table, while the audience is lucky enough to be able to ugly cry on the couch in the privacy of their own homes. It’s pretty much the best night ever in the stars’ relentless pursuit of the Mirror Ball trophy.

Nastia Liukin and Derek Hough: The Olympic gymnast chose the year that she represented the U.S. in Beijing. In rehearsal, she shows Derek her gold medal and he oohs and aahs over it while she reminds viewers that you can make your dreams come true. For their Argentine tango, she chose to dance to “Variations on Dark Eyes” by Lara St. John, which is what she performed to during the Olympics. It was a “wonderful and athletic” routine, according to Len Goodman, but it didn’t affect his heart (probably because he doesn’t have one). The other judges poo-pooed him with Bruno Tonioli giving them the first 10 of the season. 36/40

Michael Sam and Peta Murgatroyd: It’s always unfair when a competitor is told they are in jeopardy and is then forced to dance, but luckily Michael Sam is a pro at not letting things get into his head. For his most memorable year, Michael chose the year that he came out as the first publicly gay NFL prospect turned player — and also the year that he reconciled with his father and then cut ties with him when he made homophobic comments to the media. To soundtrack his rumba, he chose the song “Not My Father’s Son” from Kinky Boots, which should win a prize for most apt song title ever. By the end of the song, everyone was crying. Julianne Hough declared it “awesome,” Bruno applauded Michael for his bravery. 30/40

Riker Lynch and Allison Holker: Riker chose 2014 as his most memorable year, because that was the year his band, R5, started to take off. In case you have been anxiously awaiting for R5’s next album, they just announced that their sophomore LP, Sometime Last Night, will come out on July 10, ideally with a Mirror Ball Trophy on the album cover. Riker chose the very fast-paced “Shut Up and Dance” by Walk the Moon for his tango, which is an odd choice, but they made it work. It was proficient, dramatic, and the judges appreciated the effort, but none so much as Julianne Hough. 34/40

Robert Herjavec and Kym Johnson: Michael Sam may have squeezed out a few tears from the crowd, but Robert brought the waterworks. He dedicated “The Last Waltz” by Engelbert Humperdinck to his beloved mother, who loved Dancing With the Stars, but died of cancer before she could see him waltz on the dance floor. Carrie Ann Inaba had to dry her eyes before she could declare the sophisticated routine truly memorable. 34/40

Chris Soules and Witney Carson: The former star of The Bachelor teared up talking about breaking off his first engagement to his college sweetheart, but was thrilled to find love with his fiancee Whitney Bischoff on The Bachelor. Then in grand Bachelor tradition, Witney and Chris danced a rumba to a private concert by Gavin James performing a cover of the Magnetic Fields’ “The Book of Love.” The audience loved the routine, but the judges were unimpressed. Len put it bluntly, “It wasn’t that great.” 27/40

Patti LaBelle and Artem Chigvintsev: Only a true diva would choose to mark her most memorable year by dancing to her own song. Miss Patti hit the dance floor for a jazz routine to “Dan Swit Me” by Patti LaBelle. It was not technically proficient, but a lot of fun to watch Patti shake her fringe. Julianne said it made her want to get out there and dance with her, Carrie Ann just shrieked in excitement, and Len declared it “a cappuccino” of a dance that was frothy and fun, with “plenty of giggles and plenty of wiggles” (which are not things I want in my cappuccino). 30/40

Rumer Willis and Valentin Chmerkovskiy: Rumer chose 2014 as her most memorable year, because it was the year her sister went to rehab and taught her that haters are going to hate, and she just has to shake, shake, shake it off. Instead of waltzing to Taylor Swift, Rumer chose to dance to her second Adele song, “Turning Tables.” Her mother Demi Moore sat unfazed in the audience as her daughter talked about all the cyberbullying she suffered as the daughter of famous parents. The judges loved the emotion of the contemporary-inspired waltz. 35/40

Suzanne Somers and Tony Dovolani: Suzanne aimed straight for peak nostalgia by dedicating her dance to her former Three’s Company co-star John Ritter, promising that by the end of the foxtrot to the “Three’s Company Theme” Jack and Chrissy and John and Suzanne would have said good-bye. Carrie Ann said she may have been saying good-bye, but she was “saying hello to the competition.” 28/40

Willow Shields and Mark Ballas: Willow, who is basically a toddler, chose 2011 as her most memorable year, because that’s when she was cast as Primrose Everdeen in The Hunger Games. To prove how memorable it all was, she showed snapshots of her far more famous co-stars and then Mark choreographed a contemporary routine set in a Hunger Games stadium built inside the ballroom complete with fog, fireworks and multiple deaths. The judges were impressed, even Len who has never seen the movie. Willow was in jeopardy going into the dance, but as Carrie Ann put it, “Jeopardy, shmeopardy.” 39/40

Noah Galloway and Sharna Burgess: After the high of watching Willow kill Mark in the Hunger Games arena, Noah’s most memorable year was a stark downer. He chose 2005, the year his Humvee was blown up and he woke up Christmas morning in Walter Reed Medical Center to find out he had lost his arm and leg. Noah claims that the struggle and journey has made him a better man, and being on Dancing With the Stars is just the cherry on top. He chose to dance his contemporary routine to “American Soldier” by Toby Keith, and Sharna emoted all over him during the routine. Julianna and Carrie Ann were both in tears by the end of the performance, and Len ordered everyone to give him a standing ovation. 32/40

In Jeopardy: Willow and Mark, Michael and Peta, and Riker and Allison.

Who Went Home: Michael Sam had to turn in his dance pants and go back to throwing footballs.

The Leaderboard: Willow and Mark, Nastia and Derek, and Rumer and Val are leading the pack. 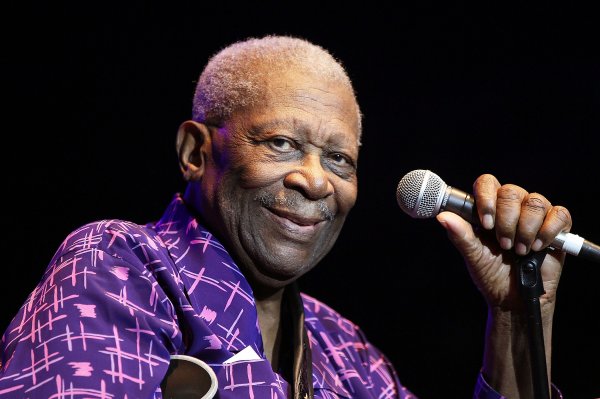 B.B. King Hospitalized in Las Vegas
Next Up: Editor's Pick